The infant daughter of Marine Corps Maj. Ryan Keller often suffered a rash after playing on the floor of the home that the family rented on base while he was assigned to the Naval Postgraduate School in Monterey, Calif. They filed a lawsuit against the private companies that outlines many other health problems that the family of five faced while living in the home. (Samantha Keller)

The infant daughter of Marine Corps Maj. Ryan Keller often suffered a rash after playing on the floor of the home that the family rented on base while he was assigned to the Naval Postgraduate School in Monterey, Calif. They filed a lawsuit against the private companies that outlines many other health problems that the family of five faced while living in the home. (Samantha Keller) 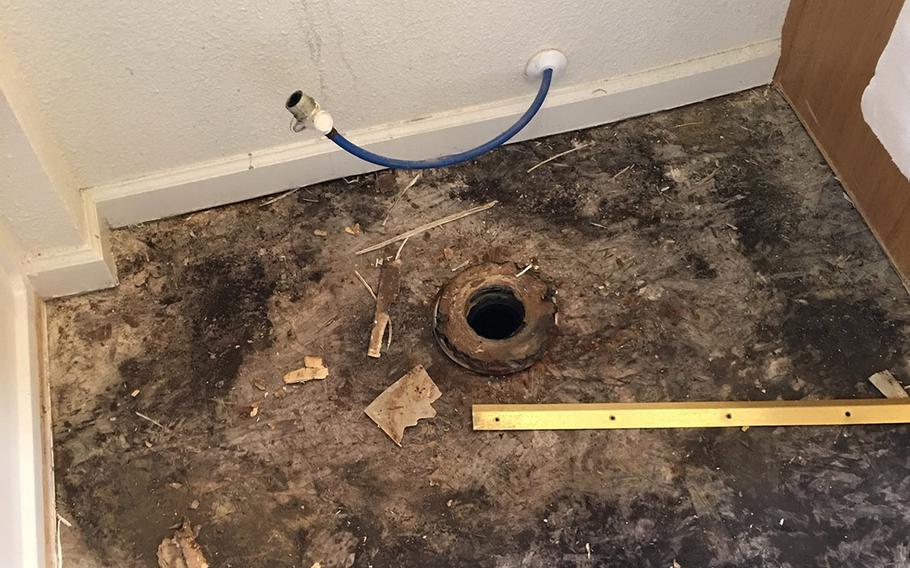 Mold was found on the floor of a bathroom in a home the D’Antonio family rented while stationed at the Naval Postgraduate School in Monterey, Calif. They filed a lawsuit against the private companies that manage the housing for negligence and fraud. (Amber Holland-D’Antonio) Two military families filed a lawsuit against the companies that manage family housing in Monterey, Calif. Both said mold in their homes sickened their children and ruined nearly all of their personal belongings. (Amber Holland-D’Antonio) 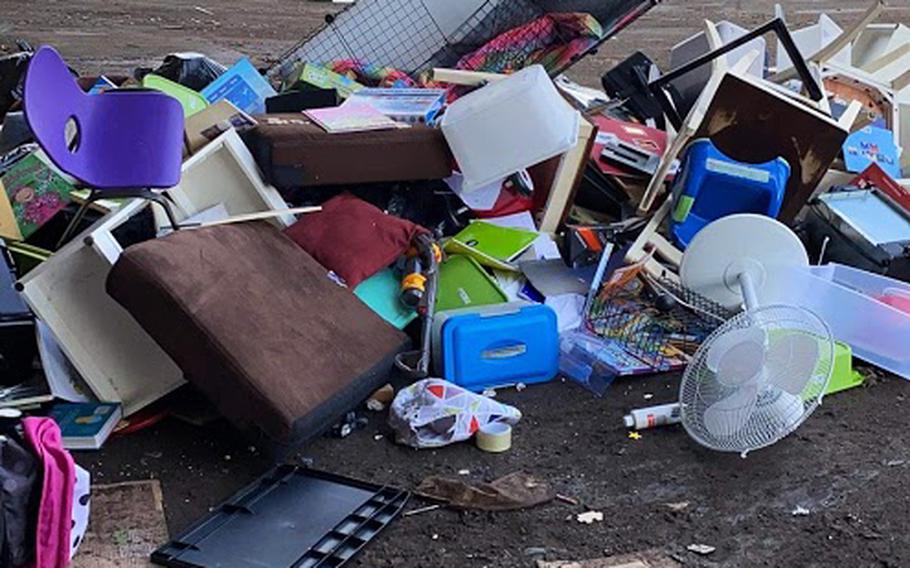 Two military families filed a lawsuit against the companies that manage base housing in Monterey, Calif., because they said mold in the homes sickened their children and ruined all of their personal belongings. Both families emptied their homes and sent nearly everything to the city dump. (Samantha Keller) 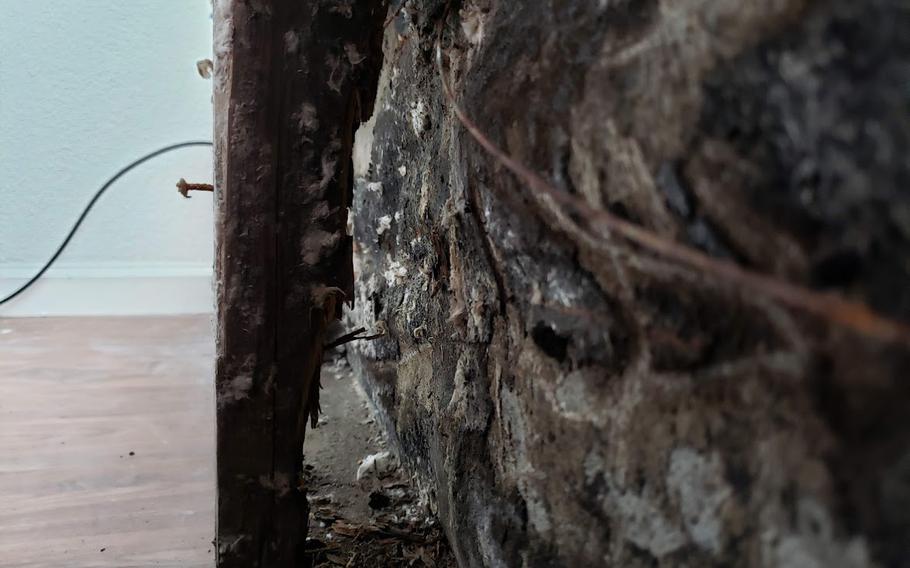 Removing the sheetrock in the living room revealed that water intrusion had begun to deteriorate the studs of the home that the Keller family rented on base while Marine Corps Maj. Ryan Keller was assigned to the Naval Postgraduate School in Monterey, Calif. They filed a lawsuit against the private companies that manage the housing for negligence and fraud. (Samantha Keller) Two military families filed a lawsuit against the companies that manage base housing in Monterey, Calif., because they said mold in the homes sickened their children and ruined all of their personal belongings. Both families emptied their homes and sent nearly everything to the city dump. (Samantha Keller)

AUSTIN, Texas — Two military families are suing several private housing companies because the homes that they rented at the Naval Postgraduate School in Monterey, Calif., contained mold that sickened their children and ruined their personal belongings.

Navy Cmdr. Louis D'Antonio and his wife Amber Holland-D'Antonio and Marine Corps Maj. Ryan Keller and his wife Samantha Keller moved into homes in the Parks at Monterey Bay about one year apart. Both families discovered their houses contained mold and believe the private companies that manage the base housing did not follow proper safety precautions while remediating the homes, which exacerbated the conditions, according to a lawsuit filed Wednesday in the Superior Court of California.

The defendants listed on the lawsuit are Monterey Bay Military Housing, Clark Pinnacle Monterrey Bay, Clark Realty Capital, Pinnacle Monterey and Michaels Management Services, which are the combination of private companies that manage base family housing for the Naval Postgraduate School and the Army’s Presidio of Monterey.

The complaints of the two families match those listed in nearly a dozen lawsuits filed in courts across the country. Some military families have turned to the legal system to settle claims that many private companies contracted by the military to maintain and manage base housing have been negligent and force families to live in dangerous conditions.

Jim Moriarty, the attorney behind the Monterey suit and others, said the continued filing of lawsuits shows problems persist despite new reforms that Congress has put into place in the last two years.

“Somebody is going to get one of these cases in front of a jury one day and [the media] will report a verdict that will shock people,” he said. “People will be outraged at the conduct of these companies.”

Officials at Michaels Management Services declined to comment on the lawsuit because the executive team has not seen all associated paperwork. Officials at Clark did not respond to a request for comment.

Samantha Keller said her three children, who range in age from 3 to 9 years old, still face lasting health effects from living in the Monterey housing, even two years after they moved.

The first house the family moved into in May 2017 had water intrusion that led to mold and sewage issues caused by tree roots growing into pipes leading to the house.

“Mold growth continued to reappear, and representatives of the landlord companies would attempt to remove mold laden Sheetrock and trim without proper containment and without taking care to prevent the tracking of moldy materials throughout the house,” the lawsuit states.

After one year, the family was moved into another house to allow for mold remediation work, only to end up in a temporary home with mold and insect problems, according to the lawsuit. They eventually decided Ryan Keller would finish his education program in Monterey alone while his family moved in June 2019 to their next duty station, Camp Pendleton, Calif.

All three children suffered respiratory symptoms, trouble sleeping and rashes, as well as emotional trauma. Living off base near Pendleton, Keller said her son saw a plastic covering a neighbor’s home that was being repainted. The boy panicked.

“My son started freaking out that the house next door had mold, so all the houses had mold, because that was our experience in Monterey. He started freaking out that he was going to lose his stuff again,” she said. “For military kids, home is not the four walls that make that place, but it is what’s in it for them. When you take all that away from them, it’s almost like losing that sense of home. … When a toy goes from one house to another, that’s when they know they are home.”

The D’Antonio family and their four children, ranging in age from 6 to 20 years old, moved into their first home on base in June 2018 and shortly thereafter noticed a smell emanating from their then-7-year-old daughter’s bedroom closet, according to the lawsuit. The smell was so penetrating that a teacher at school called Holland-D’Antonio concerned about the smell coming from the child’s clothes.

“As the closet smell persisted, the family noticed that mold had begun to grow through the floors and on the tub in the bathroom. In response, the landlord companies sent contractors who were allegedly trained in remediating mold. Instead, these contractors failed to properly contain the problem and tracked mold throughout the house. At one point, they even set moldy construction debris on the family’s sofa,” the lawsuit states.

The entire family suffered health conditions including persistent runny noses, itchy eyes, coughs, memory lapses and joint pain. One of the couple’s daughters suffered from frequent and alarming dizzy spells, causing her to suffer falls and her gymnastics coach recommended she withdraw for her own safety.

“She’s lost gymnastics. It was her passion. She wanted to do it and she was good,” Holland-D’Antonio said. “She was to a point where she couldn’t walk down the stairs. She had to sit down and scoot.”

All of the younger kids still use inhalers, something that was not needed before moving to Monterey. They moved in May to Naval Air Station Lemoore, also in California, and live in a home that they purchased during a previous assignment there.

“We’ve gotten better, but we aren’t there yet,” Holland-D’Antonio said.

Three contractors attempted to solve the mold problems within their first year in the home, and testing revealed multiple types of mold present in the home. The D’Antonios were moved into a temporary home also found to have mold and then a third home, according to the lawsuit.

It was ultimately decided more work on the original house needed to be done to better understand what was happening, and determine what caused the smell in the closet.

However, a standoff remained about what to do with the family’s belongings.

For the last 10 months, the family has continued to pay about $4,300 in monthly rent through their basic allowance for housing for their original home as they negotiate reimbursement for the damaged property still inside the house. The rent payments continued despite an Army memo that deemed the home uninhabitable, Holland-D’Antonio said.

Junk haulers came last month to take away the remaining items and furniture to the city dump. About three weeks later, the landlord offered the home to a new family, who happened to ask about it on a Facebook page for families of the Monterey housing community.

The prospective family did not take the home after reading comments from other families, Holland-D’Antonio said.

While the D’Antonios do want to be reimbursed for damages they suffered, the final decision to move forward with a lawsuit stemmed from raising awareness on the problems that families continue to face with the private companies that manage military family housing across the country.

“A lawsuit is pretty public, and it brings awareness. There are so many military families out there who are suffering in silence --afraid to tell command, afraid of repercussions, afraid they’ll [create] a lot of charges during move out. All of these things are founded,” Holland-D’Antonio said. “At end of the day it became, if we don’t do this and garner public attention, too many people are suffering in silence. We have to let people know it’s OK to speak up.”