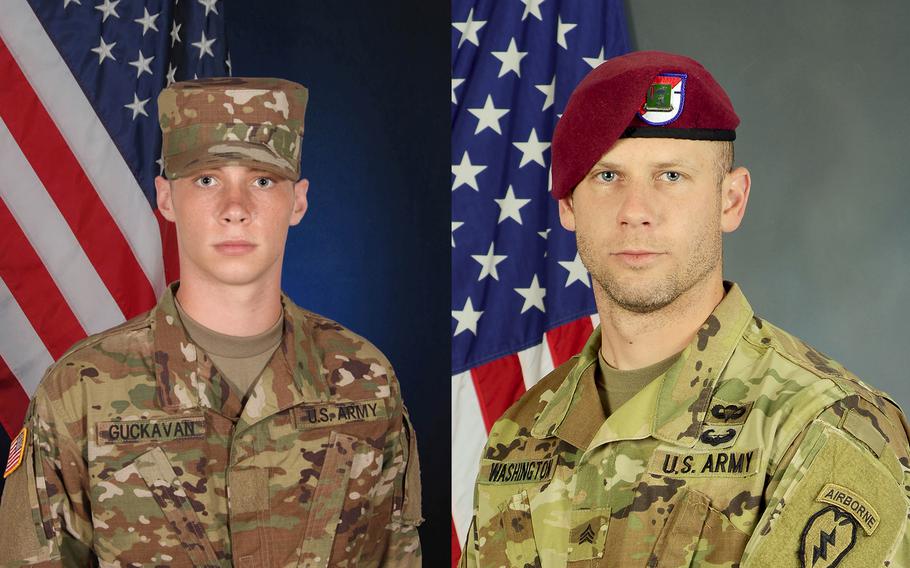 Spc. Mason James Guckavan, 21, died of a gunshot wound while in his barracks Oct. 26 at Fort Wainwright, Alaska, the Army said in a statement Thursday.

The Army Criminal Investigation Command is investigating and has not yet officially determined whether the firearm was discharged intentionally or accidentally, the Army said.

On Oct. 25, the body of Sgt. Andrew James Washington, 28, was discovered by personnel with the military and Anchorage Police Department during a welfare check after he failed to report to his place of duty, the Army said.

His death is being investigated by Anchorage police and Army Criminal Investigation Command.

Washington was an electronic warfare specialist with the 4th Infantry Brigade Combat Team (Airborne), 25th Infantry Division. He joined the Army from Raleigh, N.C., in September 2011, the Army said. He trained at Fort Jackson, S.C, and Fort Meade, Md., and was first assigned to Fort Bragg, N.C.

Washington arrived in Alaska in May 2017 and deployed with the combat team to Afghanistan from September 2017 through May 2018.

Guckavan was an infantryman with the 1st Stryker Brigade Combat Team, 25th Infantry Division, and joined the Army from Middletown, Pa., in August 2016, the Army said. He trained at Fort Benning, Ga., and was assigned to the Alaska combat team in December 2016.