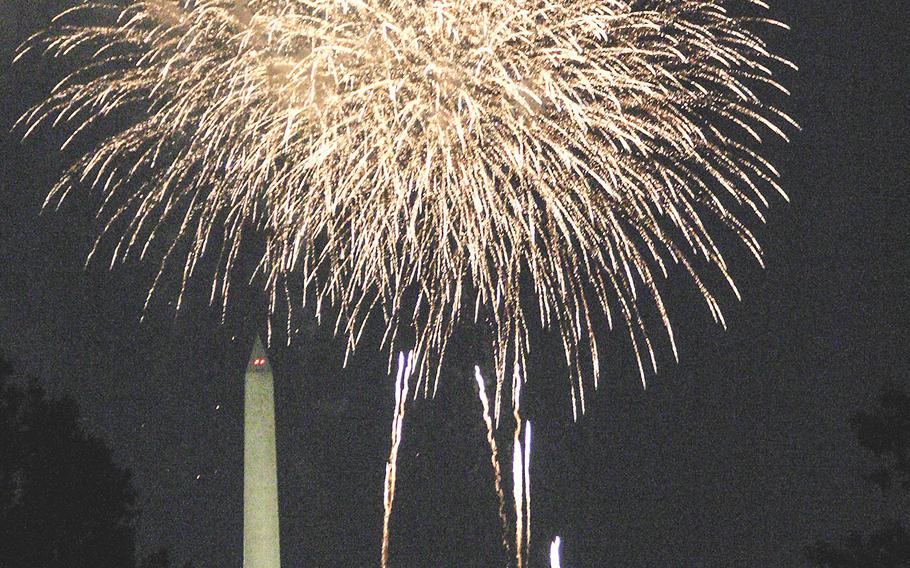 Fireworks light up the sky over the National Mall in Washington, D.C., during Independence Day festivities in 2005. (Stars and Stripes)

WASHINGTON — President Donald Trump will get the military parade that he has long sought as part of a shakeup of Washington D.C.’s longstanding Independence Day celebrations in two weeks.

The parade of military units, musicians and drill teams — as well as floats, horses and giant balloons — will step off at 11:45 a.m. on July 4, traveling down Constitution Avenue NW from 7th Street to 17th Street, Trump’s Interior Secretary David Bernhardt announced Thursday in a statement. The 10-block march through the nation’s capital is expected to last about two hours and 15 minutes.

Trump will address the nation from the Lincoln Memorial during a subsequent event, “A Salute to America,” at about 6:30. That event will include music, military demonstrations and flyovers of military aircraft, according to the Interior Department.

Bernhardt said it is all meant to honor the U.S. armed forces.

“There is no more appropriate place to celebrate the anniversary of American independence than among the nation’s monuments on the National Mall and the memorials to the service men and women who have defended the United States for the past 243 years,” he said in the statement.

The event will continue with the long-held concert, “A Capitol Fourth,” from the U.S. Capitol and a fireworks display.

Presidents traditionally have steered clear of the official Independence Day festivities in Washington. Former Presidents George W. Bush and Barack Obama, for example, were known to host private events at the White House on July 4.

But Trump has long sought to hold a major, patriotic event in Washington ever since attending the Bastille Day parade in Paris in 2017. He tweeted in February that this July 4 would include a “Major fireworks display, entertainment and an address by your favorite President, me!”

Described as a “patriotic, flag-waving, red, white and blue celebration of America’s birthday,” the official descriptions of the July 4 parade notably do not include tanks or other heavy military equipment. Trump had initially insisted on the inclusion of such machinery, inspired by the Bastille Day parade, which features thousands of troops marching down the Champs-Elysées alongside personnel carriers and displays of large weapons.

The Pentagon announced in August that that initial military parade that Trump had sought — to be held on Veterans Day — was canceled amid rising cost estimates, which had ballooned to some $92 million.

Democrats this week sought answers from the Trump administration about the cost of the new Independence Day events and expressed concern about the president’s involvement.

Democratic Sens. Tom Udall of New Mexico, Patrick Leahy of Vermont, and Chris Van Hollen of Maryland wrote in a letter to Bernhardt that they were concerned Trump could turn the annual Washington July 4 events into “a de facto campaign rally conducted at taxpayer expense that will serve to further divide rather than unify the nation.”

Co-sponsored by the National Park Service and the National Symphony Orchestra, A Capital Fourth honors the nation’s 243rd birthday with an all-star salute from the entertainment industry. Gates open at 3 p.m. www.pbs.org/capitolfourth

Independence Day culminates with a fireworks display over the National Mall. The fireworks will be launched from West Potomac Park and behind the Lincoln Memorial. They will be visible from locations throughout D.C. and Northern Virginia.