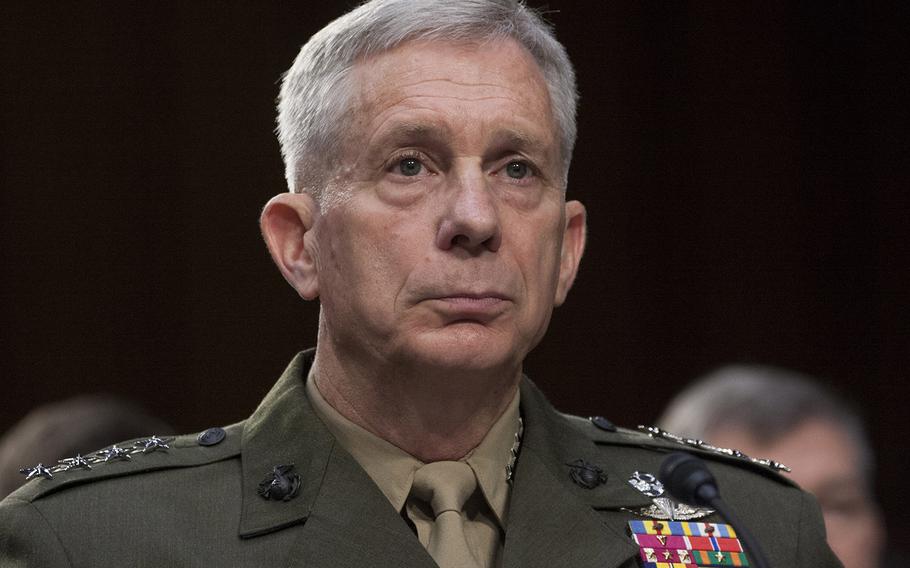 The new authorization will allow the United States to conduct offensive counterterrorism airstrikes against al-Shabab in the east African nation without seeking prior presidential approval, said Navy Capt. Jeff Davis, a Pentagon spokesman. The United States has for years backed Somalian and African Union troops with special operations advisers and armed drones, but the drones were only allowed to carry out strikes to defend those forces if they were attacked.

“This authority is consistent with our approach of developing capable Somali security forces and supporting regional partners in their efforts to combat al-Shabab,” Davis said. “Somali and [African Union Mission in Somalia] forces have already achieved significant success in recapturing territory from al-Shabab, and additional U.S. support will help them increase pressure on al-Shabab and reduce the risk to our partner forces when they conduct operations.”

Marine Gen. Thomas Waldhauser, who leads U.S. Africa Command, told reporters at the Pentagon last week that he had advised the White House to allow the military to approve offensive strikes within Somalia to provide forces fighting al-Shabab there greater flexibility. At any given time, the United States has a team of about 50 special operations advisers in Somalia, a defense official said. Now, Waldhauser can approve an offensive strike at the request of those advisers.

“It allows us to prosecute targets in a more rapid fashion,” Waldhauser said. “So that's obviously something that we advocate for and if we were given that opportunity -- given out those permissions and authorities -- it will be very helpful to us.”

Offensive counterterrorism airstrikes have been conducted previously in Somalia with presidential authority. For example, the United States killed senior al-Shabab leader Abdullahi Haji Da’ud in south-central Somalia in a drone strike last May.

Such strikes have impacted the group, which has largely been driven from urban areas of the country into rural regions and diminished some of its capabilities in recent years, said a U.S. defense official who spoke on condition of anonymity.

Nonetheless, al-Shabab, which aligned with al-Qaida in 2012, remains a capable terrorist group that regularly carries out attacks on Somalian troops, including killing 10 in an assault last week, and on hotels and other soft targets within the nation’s capital Mogadishu.

Al-Shabab, which translates to “the youth,” was formed in the early 2000s with the intent to overthrow Somalia’s Western-backed government and implement strict Sharia, or Islamic law. It has since morphed into a jihadist organization, carrying out frequent attacks in Somalia, Kenya and Uganda.

It is now the third largest affiliate of al-Qaida, the defense official said. The group claimed responsibility in February 2016 for the bombing of a passenger airplane that blew a hole in the aircraft and forced it to land in Mogadishu. The attack killed only the suspected bomber.

Waldhauser said last week that offensive strikes will keep al-Shabab from expanding its territory where it plots such attacks. The general said expanding air operations in Somalia included inherent risks to civilians in the region, but he stressed the U.S. military would go to “great pains” to minimize risk.

“Obviously the cardinal rule in these types of engagements is not to make more enemies than you already have,” Waldhauser said.