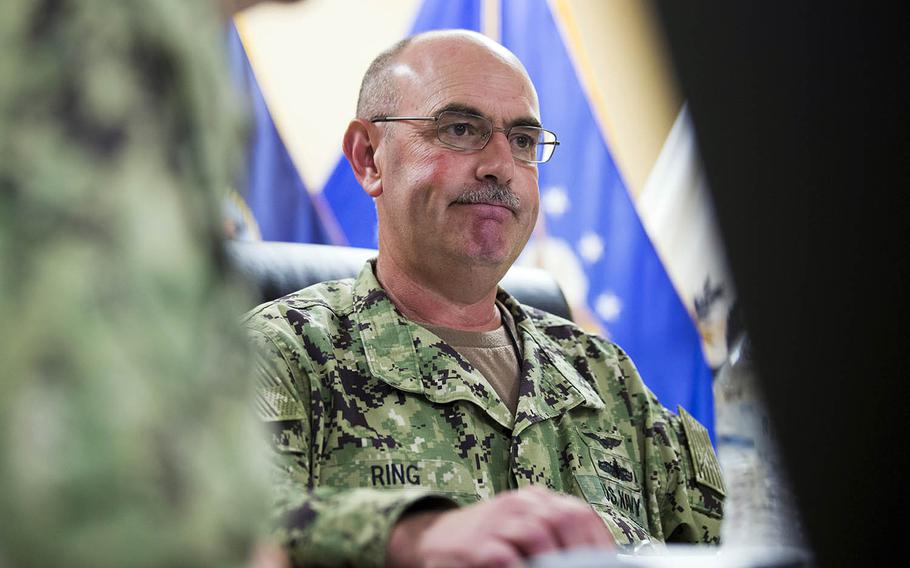 In this Wednesday, April 17, 2019, photo reviewed by U.S. military officials, U.S. Navy Rear Adm. John Ring, Joint Task Force Guantanamo Commander, pauses while speaking during a roundtable discussion with the media, at Guantanamo Bay Naval Base, Cuba. Military officials say that Ring has been fired for a loss of confidence in his ability to command. A statement from U.S. Southern Command says Ring was relieved of duty Saturday, April 27. (Alex Brandon/AP)

WASHINGTON — The top military officer in charge of the detention facilities at Naval Station Guantanamo Bay in Cuba was relieved of command this weekend by the commander of U.S. Southern Command, who cited a “loss of confidence in his ability,” officials said Monday.

Navy Rear Adm. John Ring was removed Saturday from his job as the commander of Joint Task Force Guantanamo Bay during a meeting with Adm. Craig Faller, the commander of U.S. Southern Command, according to a SOUTHCOM statement. Since April 2018, Ring had led the joint task force of some 1,700 personnel responsible for detaining 40 law of war detainees captured on battlefields in Afghanistan and Iraq nearly two decades ago.

Officials with SOUTHCOM and at Guantanamo Bay on Monday declined to provide a reason for Ring’s sudden removal. He had been slated to relinquish command in June as part of a regular rotation of leadership.

Faller’s decision came at the conclusion of a monthlong investigation that was completed in mid-April, said Jose Ruiz, a SOUTHCOM spokesman. He declined to provide additional information about that probe, including the reason it was launched. Ring will soon be assigned temporary duties elsewhere within SOUTHCOM.

Army Brig. Gen. John Hussey, who had been serving as Ring’s deputy, was named the acting commander of Joint Task Force Guantanamo Bay, according to the statement.

“This change in leadership will not interrupt the safe, humane, legal care and custody provided to the detainee population” at Guantanamo Bay, reads the SOUTHCOM statement.

Ring has long touted the need for new facilities at the detention center on the small American base on Cuba’s southeastern coast. Last year, he said his primary goals at Guantanamo Bay included improving housing and other facilities for troops and convincing Congress to allocate funds to build a new detention facility for Guantanamo’s high-value detainees. He described the classified Camp 7 facility as deteriorating.

Ring has also said he wanted more funding to provide better care for the aging population of enemy combatants, some of whom are in there 70s.

The admiral made similar pitches to reporters visiting the base this month, according to news reports in the New York Times and Defense One. A SOUTHCOM official told the Times that Ring’s removal was not related to those news reports.

Ring was commissioned into the Navy in 1988. His past commands include Carrier Airborne Early Warning Squadron 113, the USS Comstock dock landing ship and the USS Nimitz aircraft carrier.

No permanent replacement for Ring has been named, Ruiz said.

Hussey will serve as the commander of the joint task force until a permanent replacement is named. Hussey has served as the deputy commander of JTF Guantanamo since November 2018. Hussey is a veteran of Operation Desert Storm and the recent wars in Afghanistan and Iraq. He served previously as an enlisted Marine before becoming an Army officer in 1988, commissioning as a military police officer.