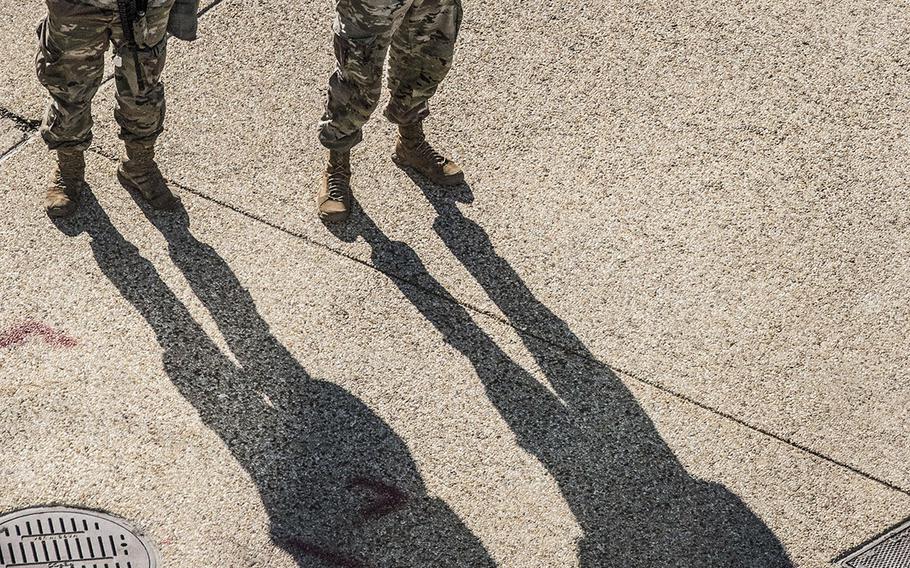 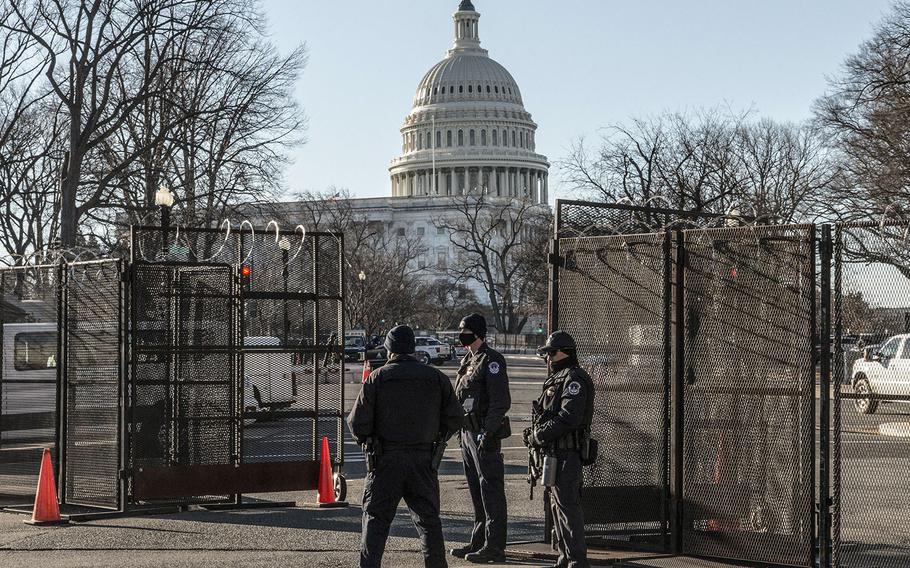 Buy Photo
Capitol Police officers stand at an entry point through fencing that surrounds the Capitol complex on March 3, 2021. (Joe Gromelski/Stars and Stripes)

WASHINGTON — Leaders from the House and Senate Armed Services Committees have united in opposition to security measures at the Capitol that include deployed National Guard troops and fencing around the building due to concerns over cost, the strain on readiness and a lack of clear threat.

A group of Senate leaders on Friday, led by Jim Inhofe of Oklahoma, the ranking Republican on the Senate Armed Services Committee, demanded answers from acting Capitol Police Chief Yogananda Pittman about what justifies the need for fencing around the complex and the continued deployment of National Guard troops.

“Since the events of Jan. 6, Capitol Police has repeatedly failed to provide specific, credible threat intelligence to adequately justify the current Capitol security posture, which remains disproportionate to the available intelligence,” Inhofe wrote, along with four other Senate leaders.

The letter to Pittman came a day after the House Armed Services Committee Chairman Adam Smith, D-Wash., and ranking Republican Mike Rogers of Alabama issued a joint statement that called for a “measured drawdown” of the Guard deployment.

“We are deeply troubled by the current level of security around the United States Capitol. More than two months after the Jan. 6 attack, the seat of our nation’s democracy remains heavily protected by guardsmen and surrounded by a perimeter fence,” Smith and Rogers said.

The backlash from Congress mounted after Defense Secretary Lloyd Austin approved a request this week from the Capitol Police to keep about 2,300 National Guard troops deployed to the Capitol until late May.

About 26,000 Guard members were sent to the Capitol in the wake of the Jan. 6 riot at the building, and more than 5,200 troops now remain in Washington. The deployment was initially set to end Friday before it was extended.

A 7-foot, chain-link fence topped with razor wire was also erected around the Capitol after a mob of Trump supporters stormed the building.

“It’s entirely unclear to us why the fencing around the complex remains” without a specific threat to the Capitol and with the ability to rapidly re-deploy fencing should a threat arise, Inhofe wrote in the letter to Pittman.

The letter was also signed by Richard Shelby of Alabama, Marco Rubio of Florida, Roy Blunt of Missouri, and Rob Portman of Ohio., the ranking Republicans of the Senate Appropriations, Intelligence, Rules and Administration, and Homeland Security and Governmental Affairs committees respectively.

The senators also bashed Austin for approving the request to extend the troop deployment without “specific underlying threat intelligence and no mission task analysis.”

“This request will cost the taxpayer hundreds of millions of dollars and further strain the Guard and its brave men and women,” they wrote.

In order to reestablish a “secure and open” building, the Republicans wrote to Pittman that the Capitol Police must make improvements by working with other federal and local civilian law enforcement agencies and slammed the “continued militarization of Capitol complex security.”

However, the senators acknowledged “we are cognizant of the generally heightened threat environment in which you are operating.”

Smith and Rogers also questioned the security measures. They sent a message to Austin that they want to cut back the number of troops in the city.

"We appreciate our guardsmen answering the call to protect the Capitol, but it’s time for us to review what level of security is required, so they can return home to their families and communities," they said.

The congressmen argued the bolstered security “is not warranted at this time” and warned of the “financial costs associated with this prolonged deployment,” though “some level of support” from the Guard is necessary.

The Senate leaders in their letter Friday to the police chief requested responses to a long list of questions by March 19. The questions span from specifics about the intelligence that the police force received of possible threats in advance of Jan. 6 to the possibility of using surveillance to replace Guard troops.

“I’m extremely uncomfortable with the fact that my constituents can’t come to the Capitol. There’s all this razor wire around the complex. It reminds me of my last visit to Kabul,” he said.