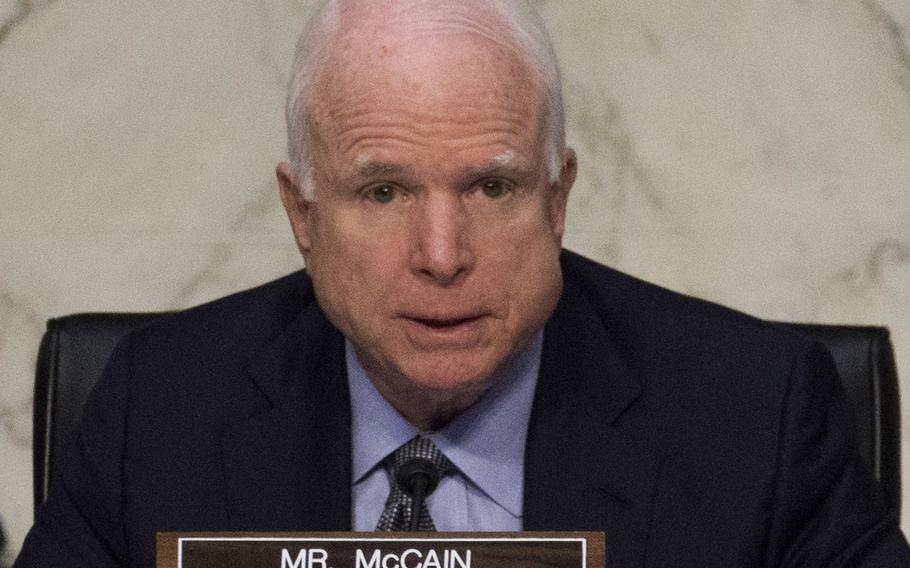 WASHINGTON — Congress could wrap up a 2016 defense policy bill this week that authorizes pay and benefits for troops, but the Obama administration warned again Wednesday of a veto, according to Sen. John McCain, R-Ariz.

McCain, who is heading up negotiations on the National Defense Authorization Act, said he received the most recent veto threat during a phone call with Defense Secretary Ash Carter, who has repeatedly delivered the same message to lawmakers during Capitol Hill testimony.

A veto of the NDAA could drag out the military budget for months and require stopgap bills to keep troops funded. The massive bill is in the crosshairs because the administration wants Congress to lift caps on federal spending created in 2011 to reduce the nation’s debt. Instead of lifting caps, McCain and other defense hawks used a special overseas war fund to sidestep spending limits for defense.

“So, we just have a difference of opinion,” McCain said while speaking at the Heritage Foundation in Washington, D.C. “I am very concerned the president will veto it. It is a great concern to me.”

The authorization act is a key piece of legislation that enables the military to issue paychecks, give raises and provide a raft of benefits. McCain said full details of the bill could be available this week, when a House-Senate conference committee is expected to publish a final version. Congress could vote before its monthlong August recess.

The 2016 NDAA will include a historic overhaul of the military retirement system and steep cuts to headquarters and management staffs, McCain said.

Congress will order a new retirement system that blends the current 20-year pension with a 401(k)-style approach that will increase the number of troops who leave service with retirement benefits from 17 percent to 75 percent, he said.

McCain said the NDAA will also slash funding for the military’s headquarters and administrative staffs by 30 percent over four years, saving the government $1.7 billion next year.

“With these savings and billions more identified throughout the bill, we accelerated shipbuilding, added and upgraded fighter aircraft, invested in key modernization priorities across the services and met our commanders’ most urgent needs,” McCain said.

Carter and other top Pentagon brass have warned lawmakers that the budget thwarts the long-term planning needed for defense because it relies on the Overseas Contingency Operations — an account created for emergency wartime purchases — to fund $38 billion in daily expenses.

Meanwhile, President Barack Obama has said he will veto any budget bill that does not modify the spending caps mandated by the Budget Control Act of 2011.

The chances of a veto are still uncertain, said Todd Harrison, senior fellow for defense budget studies at the Center for Strategic and Budgetary Assessments.

So far, threats have come from Carter and Obama advisors and not directly from the president. “This is not the highest level of veto threat,” Harrison said.

Still, a White House rejection of the NDAA could set off another series of budget headaches in the coming months, said Roger Zakheim, a visiting fellow at the American Enterprise Institute.

“Troops are going to continue to get paid until the end of September if the NDAA is vetoed in August,” Zakheim said.

Congress would then be forced to pass a continuing budget resolution in lieu of the authorization bill and could end up hashing out a defense budget in January or February — months after the 2015 budget expires, he said.