‘They can count on us’: Houston VA hospital withstands Harvey, prepares for aftermath 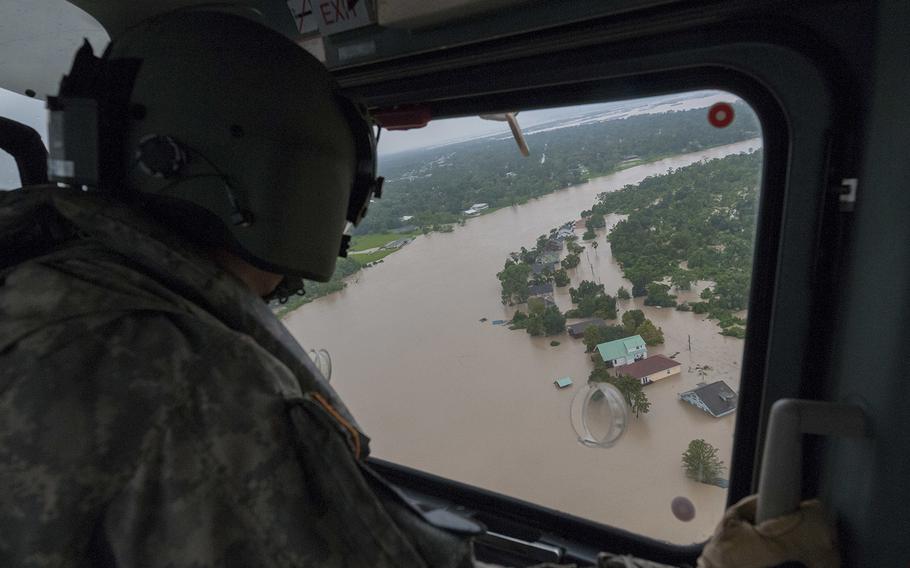 Search and rescue operations continue in the aftermath of Hurricane Harvey. Some of the wounded were treated by staff at the Department of Veterans Affairs hospital in downtown Houston. (Texas Military Department)

WASHINGTON — When Hurricane Harvey lashed southeast Texas on Friday and brought punishing rain and devastating floods for days afterward, the Department of Veterans Affairs hospital in downtown Houston remained open, operated by about 700 staff members who made the facility their temporary home.

Hospital staff members were sleeping on floors or small cots in their offices or in a small auditorium, Dr. SreyRam Kuy, the associate chief of staff at the Michael E. DeBakey VA Medical Center in Houston, described Wednesday in a post on the VA’s website. Some of them weren’t certain if their homes were flooded, while others saw news footage of their neighborhoods under water.

They stayed to care for about 400 veterans who remained at the hospital, which is also serving as a shelter for homeless veterans and others.

One former U.S. Army Ranger swam through flood waters to reach the hospital Tuesday, where he was treated for a burst appendix, The Associated Press reported.

“He knew that no matter what, the VA would be there to care for him,” Kuy wrote about the veteran. “It’s humbling to know that [veterans] feel they can count on us to be there.”

In an email to Houston employees Tuesday, VA Secretary David Shulkin said their actions were “heroic” and hinted at a possible deluge of veterans in the area seeking help in the aftermath of the disaster. More than 500,000 veterans live in the areas affected by the Category 4 hurricane and the tropical storms that followed, including more than 175,000 veterans who are enrolled in VA health care.

“We know the days and months ahead will require continued diligence to ensure our veterans receive the best services we can provide,” Shulkin wrote. “I know you are up to the task.”

Shulkin said Wednesday the hospital was “fully stocked and ready to stay in operation.”

As Harvey made its last landfall in Texas and Louisiana on Wednesday, 20 VA health care providers from Dallas, 25 from Austin and 15 from San Antonio traveled to Houston to provide some relief, according to reports from The Associated Press and Austin American-Statesman. The Austin VA sent a busload of supplies, and Shulkin said seven truckloads of food arrived Tuesday night from Dallas.

A volunteer team of VA staff at the Little Rock, Ark., VA hospital established a 24-hour call center to answer questions and concerns of veterans in southeast Texas. The call center in Houston was closed over the weekend because of the storm. In one hour, Little Rock staff answered 256 calls, the Arkansas Democrat-Gazette reported.

“Once the storm ends, we will be in apposition to assess any longer-term impacts on our facilities and programs in the area,” VA Press Secretary Curt Cashour said in a statement.

VA officials were warning veterans to stay in a safe location and only go to the Houston hospital if they had urgent medical needs. The VA enacted its disaster relief plan for pharmaceuticals, which allows veterans with VA identification cards and a prescription to receive a 14-day supply of medication at any CVS or HEB pharmacy.

On Thursday afternoon, Shulkin traveled to Texas with Vice President Mike Pence, Labor Secretary Alexander Acosta, Transportation Secretary Elaine Chao, Energy Secretary Rick Perry and acting Homeland Security Secretary Elaine Duke. Before leaving Washington, Shulkin said in a statement that he would meet with first responders and “make sure that veterans are being cared for down there.”

“The president showed his leadership on this right from the beginning,” Shulkin said. “Every Cabinet member participated in this coordination to make sure we were prepared.”