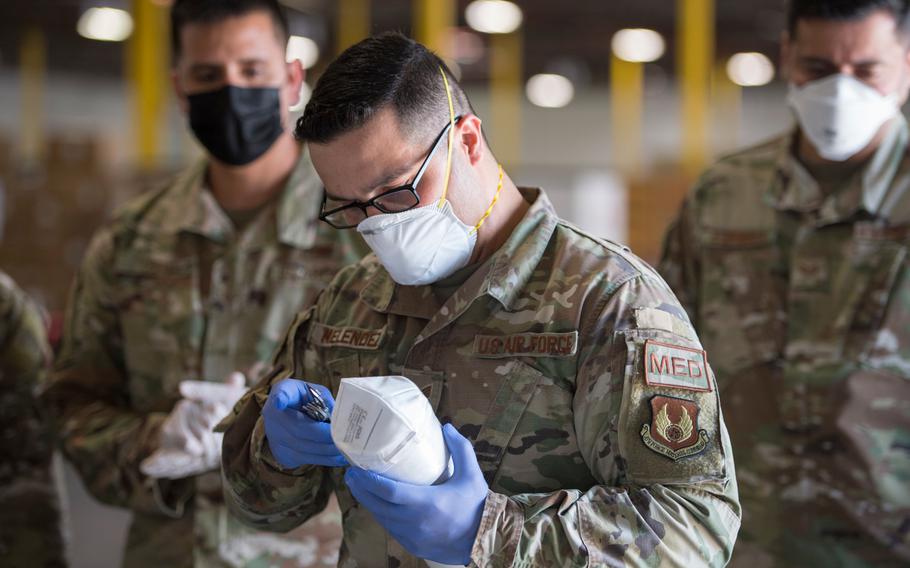 WASHINGTON — The Pentagon will likely never have enough supplies to test the entire U.S. military, but leaders aim to test random units to improve their understanding of the scope of asymptomatic carriers among their ranks.

Defense Secretary Mark Esper said Tuesday that some two months into the coronavirus pandemic that the military has little idea how many of its troops are actually carrying the virus without experiencing the telltale symptoms such as fever and breathing difficulties. The Pentagon knows 4,967 troops have tested positive for the disease, of which 100 had spent some time in a hospital battling the virus, 1,844 have recovered, and two of its service members died of complications caused by the illness, according to data released Tuesday.

The Defense Department has placed its troops into four tiered groups to prioritize those who must be tested. Esper said the Pentagon now needs to test 56,000 service members each week to achieve its goals, and those numbers are likely to rise in the future.

The Pentagon’s first priority is to test its troops deemed tier 1 — those responsible for the nation’s nuclear enterprise, including service members on submarines and bomber aircraft capable of deploying nuclear weapons and those responsible for U.S.-based ballistic missile silos. Those troops have all been tested, said Army Gen. Mark Milley, the chairman of the Joint Chiefs of Staff.

DOD is now working through testing its entire second tier, consisting of those now deployed to support ongoing combat or other operations around the globe. The third tier in the Pentagon’s coronavirus testing priorities are troops preparing to deploy or those preparing to return home.

The rest of the Pentagon’s service members make up the largest group, tier 4, and its lowest priority for testing. Those are troops who are for the foreseeable future expected to remain at their home stations — where they are confined largely due to a near-universal, stop-movement order for nonessential travel. It is those units within tier 4 that Esper wants to test randomly in a program that he has dubbed “sentinel testing.”

“We say this group out here, we haven’t seen anything from them, but let’s test just in case,” the defense secretary said Tuesday during a news briefing. “And we’ll see if there’s carriers out there, and it helps us sharpen our focus.”

Esper did not say when such testing could begin, how often the Pentagon plans to conduct it or how widespread it would be. The defense secretary said the program is still being shaped as the Pentagon is working to build up its coronavirus-testing supply base while simultaneously expanding the number of troops it tests every day.

Pentagon officials first realized the scope of potential asymptomatic carriers within its ranks as it worked through testing the entire crew of the aircraft carrier USS Theodore Roosevelt. In the month after its first cases were found within flight crews aboard the massive ship, more than 1,000 sailors contracted the virus — the majority without experiencing symptoms. The fast-spreading virus would sideline the ship in Guam, where its crew was offloaded and isolated in an effort to stop the spread. It marked by far the worst outbreak among the U.S. military to date, which includes one of the military's two coronavirus-linked fatalities.

The Navy and national Centers for Disease Control and Prevention last month launched a scientific probe into the Roosevelt outbreak, meant to find lessons from the spread of the virus aboard the ship where tight quarters make health protocols such as social distancing impossible. Officials said the probe could be used to help the military and civilian agencies respond to other outbreaks.

Esper said he could not predict how long the pandemic would continue to impact the military. Last month, he extended his stop-movement orders through the end of June. He plans to review the status of the pandemic and his forces every 15 days to determine if the order can be canceled earlier or should be extended. The first such review will occur this week, he said.

For now, the military will continue to adhere to strict social distancing protocols when possible and the utilization of face coverings, he said.

“I think we’ll be in a new type of normal for an amount of time,” Esper said. “We’re going to do everything possible to protect our people … for the foreseeable future.”