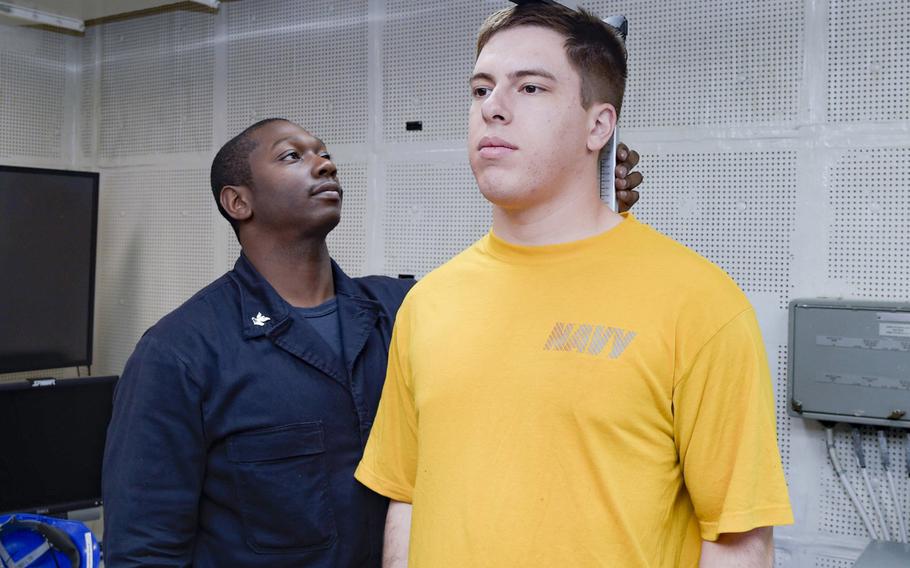 Petty Officer 2nd Class Byron Cary measures the height of Seaman Joshua Ritchie, during the body composition assessment aboard the aircraft carrier USS Dwight D. Eisenhower in 2017. The Marines were the leanest service last year, whereas the Navy was the fattest, according to a Pentagon study. (Dartez C. Williams/U.S. Navy)

Petty Officer 2nd Class Byron Cary measures the height of Seaman Joshua Ritchie, during the body composition assessment aboard the aircraft carrier USS Dwight D. Eisenhower in 2017. The Marines were the leanest service last year, whereas the Navy was the fattest, according to a Pentagon study. (Dartez C. Williams/U.S. Navy) 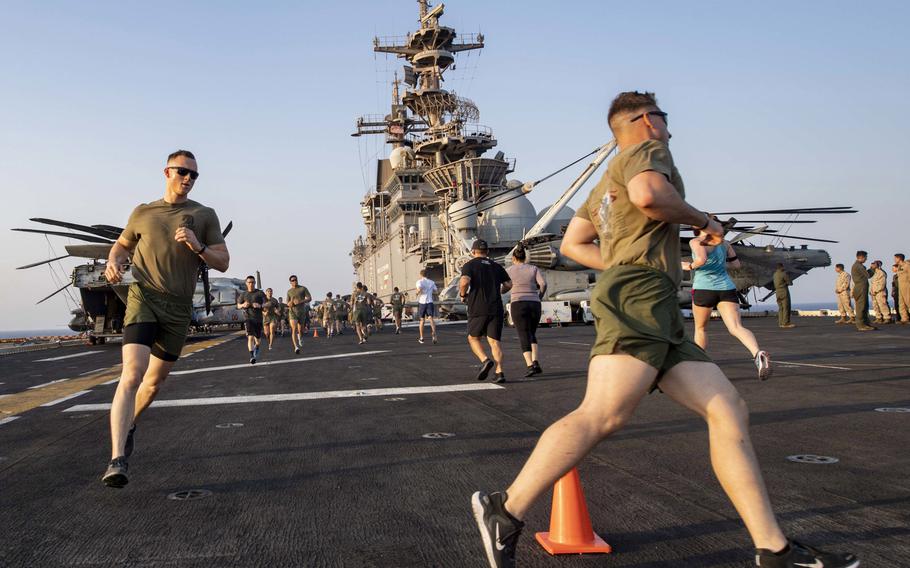 Sailors and Marines aboard amphibious assault ship USS Boxer run during a Labor Day 5K held on the flight deck during exercise Eager Lion in the Red Sea, Sept. 1, 2019. The Marines were the leanest service last year, whereas the Navy was the fattest, according to a Pentagon study. (John Luke McGovern/U.S. Navy)

The Navy was the most obese and the Marine Corps was by far the least, but the overall rate across the military continued a steady increase, a Defense Department study found.

Marines, meanwhile, were hampered most by back and knee injuries, said the Health of the DOD Force report, which also looked at the services’ rates of injury, sleep disorders and behavioral disorders.

More than 17% of military personnel were considered obese across the DOD, up from less than 16% four years earlier, said the report, published in the August edition of the military’s Medical Surveillance Monthly Report.

For the Navy, the rate was 22%, compared to 8.3% of Marines. The Army’s rate matched the overall average and the Air Force was slightly higher at about 18%.

The findings follow earlier studies that have found dramatic increases in obesity among the services since 2001.

But while obesity had grown, overall rates of injury have decreased since 2016, the report found. As with obesity, the results were not the same across all the services.

The Navy fared the best with the lowest rates of acute and cumulative trauma injuries, and lower than average rates of sleep disorders and behavioral health diagnoses, such as adjustment disorder, depression and anxiety.

Mission-specific training and operational requirements were likely to blame for the rate of injury that was about 26% higher than the DOD average, it said.

The study recommended the military look at the causes and prevention of behavioral health and sleep disorders, such as sleep apnea and insomnia, given their potential to reduce performance or lead to disability and separation.

The Air Force saw among the highest rates of injuries from repeated “micro-trauma,” which caused pain and inflammation in backs, knees and other joints.

The Marine Corps, which is the smallest branch, also had the youngest force, which likely explains its relatively low rate of obesity.

The military data show more than one-quarter of troops over age 35 were obese, compared to less than 10% of those under age 25. Nearly 90% of Marines were under age 35, compared to about three-quarters of the other services.

But the Corps suffered higher rates of acute injuries, such as sprains and strains, compared to DOD as a whole. Back and knee joint disorders were the leading causes of limited duty.

Such injuries resulted in reduced deployability and increased medical separations, the study said.

To calculate obesity rates, the study used data for all servicemembers where height and weight were measured on the same day and cross-referenced that with birthdate, sex and branch of service information. It relied on body mass index, a measure of body fat based on height and weight, and excluded pregnant troops. A BMI of 30 or more was considered obese.

While less accurate than methods of direct measurement, high BMI is linked to many of the same negative health effects of increased body fat, the Centers for Disease Control and Prevention has said.

As a growing trend in America, obesity has also made it harder for the services to find people physically qualified to serve.

More than 20% of Americans age 12 to 19 and nearly 40% of those over age 20 were obese, the National Health and Nutrition Examination Survey said last fall.