The first proof-of-concept project for the Chemical Biological Center's expanded and upgraded biomanufacturing facility will be the production of fuel for the Hellfire missile. (Brian Feeney/U.S. Army)

The first proof-of-concept project for the Chemical Biological Center's expanded and upgraded biomanufacturing facility will be the production of fuel for the Hellfire missile. (Brian Feeney/U.S. Army) 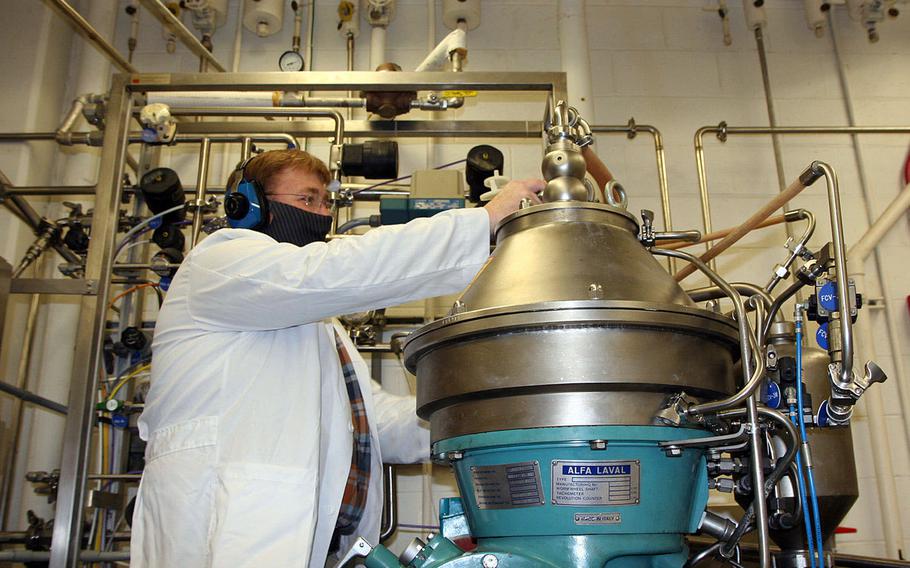 Biologist Joe Kragl operates a centrifuge in the extraction phase, May 11, 2021, in the Chemical Biological Center at Aberdeen Proving Ground, Md. It contains a bucket that functions like a large salad spinner, separating the microbes from the broth. (Brian Feeney/U.S. Army) 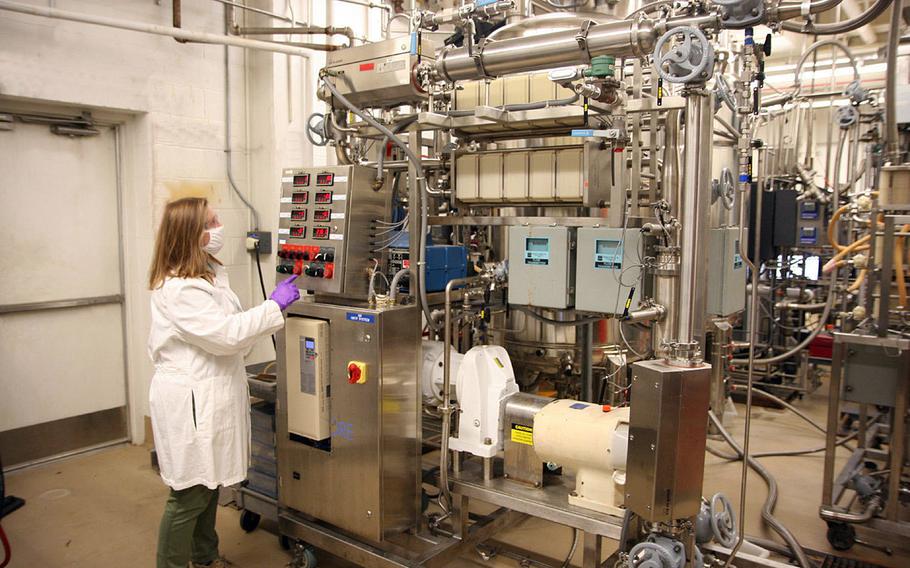 Anna Crumbley, a research chemical engineer, removes the solids from a new batch of fermented microorganisms, May 11, 2021 at Aberdeen Proving Ground, Md. The Chemical Biological Center is working on using bacteria to make missile propellant, among other applications. (Brian Feeney/U.S. Army)

Military researchers are helping “scale up” the use of E.coli to produce fuel for Hellfire missiles, part of a larger push to manufacture small batches of specialty chemicals in cheaper and cleaner ways using microbes.

The use of gut bacteria to make missile propellant is a “larger proof of concept” for the Army’s expansion of biological manufacturing capabilities.

The hope is that it will wean the U.S. military off chemicals derived from crude oil in “costly petrochemical facilities” and often available through limited suppliers, the Combat Capabilities Development Command Chemical Biological Center said in a statement.

“Many crucial chemicals are either manufactured by a single source domestically, or worse yet, inside foreign nations that may not always be willing to supply us,” said Peter Emanuel, the center’s senior research scientist for bioengineering.

Emanuel leads the center’s biomanufacturing initiative, part of what he calls a “manufacturing revolution that can make the United States self-sufficient.”

Growth in the bioindustrial sector could see the U.S. face off with China in a superpower manufacturing technology race in the coming years, officials said, but it could also provide an economic boost while reducing the financial and environmental costs of manufacturing.

Biomanufacturing relies on bacteria and other microorganisms with modified DNA to produce materials that are costly or impossible to obtain otherwise, including high-energy chemical compounds used in explosives.

The Army’s biomanufacturing facility cultivates the microbes that it uses to ferment liquid held in large, shiny steel vats, “just like in a microbrewery,” its statement said.

The production of Hellfire missile fuel will be the first major proof-of-concept project for the center’s expanded and upgraded facility at Aberdeen Proving Ground, Md., and will address an immediate defense need, officials said.

The facility will produce the fuel’s chemical precursor, called BT, which the Defense Department currently gets from a single U.S. supplier. Other DOD labs will help manufacture the final product, called BTTN.

“Establishing an alternative domestic source for this fuel is important because the Hellfire is the U.S. military’s weapon of choice for precision strikes on high-value targets,” the center says on its website.

The fuel is used in virtually all single-stage missiles in the U.S. arsenal because it is more stable than nitroglycerine, the site says.

But traditional manufacturing costs make it “economically infeasible” to use more than 15,000 pounds of BT a year in BTTN production, Navy-funded researchers at Michigan State University found in a 2007 report. To reach desired production levels, the costs would have to be driven down two-thirds to about $15 a pound.

The Michigan State researchers used genetically engineered E.coli and fiber from corn hulls to produce half a liter of a 99% pure form of BT through a process that was “relatively environmentally benign” and which they estimated could be improved to yield the chemical for less than $19 a pound.

The Chemical Biological Center, which is slated to receive some $24 million over the next five years for expansion and upgrades, did not provide a price-per-pound estimate for its effort to scale up that process.

When construction of the biomanufacturing facility is completed and it is ready to run at full capacity within about two years, the center plans to market it as the “go-to place” for producing high-value chemicals with military applications.

These could include energy-dense propellants and explosives, reactive coatings and textiles, optical and sensor materials that can bend light, and new therapeutics such as antimicrobials and vaccines, said Henry Gibbons, a microbiologist and program manager in charge of the center’s expansion effort.