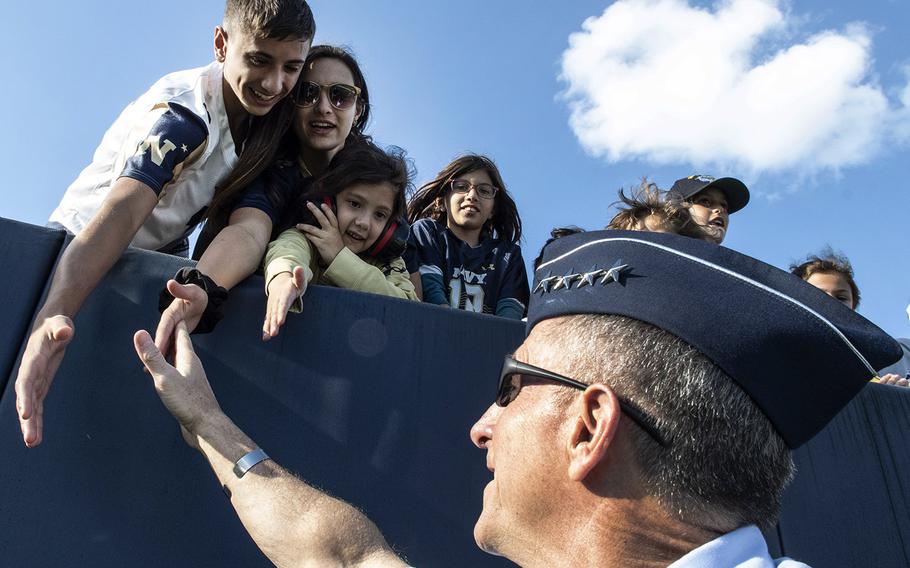 Now that the coronavirus pandemic is keeping Gen. David Goldfein from interacting with the public like he did at the Air Force-Navy football game last year in Annapolis, the Air Force chief of staff is settling into a new routine that includes telework. (Joe Gromelski/Stars and Stripes)

WASHINGTON — Gen. David Goldfein, the Air Force chief of staff, worked from home Tuesday to “set the example” for his troops as they face down the coronavirus pandemic that has stricken hundreds of thousands across the globe, including seven active-duty airmen.

“I actually did telework for the first time yesterday, and spent all day, as you might imagine, working this particular issue,” the general told reporters Wednesday of the coronavirus outbreak. “We are sending a message to every echelon of the Air Force, that if the chief of staff of the Air Force can [telework], you can to.”

The actions of the Air Force leadership in response to the virus follows the guidance of federal and state health and political officials who have urged people to avoid unnecessary travel and practice social distancing.

Goldfein said he, Gen. Stephen Wilson, the No. 2 Air Force officer, and Air Force Secretary Barbara Barrett will rotate days working outside of the Pentagon for the foreseeable future. He also said he plans to telework Mondays, Wednesdays and Fridays.

Goldfein said he and the other top leaders have the ability to conduct all their duties away from the Pentagon, including accessing classified materials.

But not everyone in the Air Force can work from home, and the service is pushing forward with its missions, including transporting troops and supplies across the globe to support ongoing combat operations and missions, Goldfein said. That means aircrews and troops charged with maintaining and fixing those aircraft, among other service members, cannot telework.

The Air Force is taking steps to keep aircrew safe when flying missions, which take them into areas such as South Korea and Italy, among the hardest hit nations by the coronavirus. The service has implemented screening procedures for those airmen including taking temperatures before they enter an aircraft and social distancing when possible aboard those planes.

“We’ve got to keep this global mobility mission flying,” Goldfein said. “We’re really minimizing movement and keeping them in a bubble, if you will, to make sure we can keep the force size we need to be able to maintain the missions.”

The general said he could not immediately say Wednesday where the seven airmen are located who have confirmed cases of the coronavirus or what their jobs are. But they have taken necessary precautions to limit the spread of the infection, such as self-quarantining, he said. No members of the Air National Guard or the Air Force Reserve have been reported to have contracted the virus, Goldfein said.

Across the military, 49 service members had confirmed cases of the virus as of early Wednesday, according to the Pentagon. That marked 13 new confirmed cases among troops since Tuesday.

Lt. Gen. Dorothy Hogg, the Air Force surgeon general, said she expected cases to continue to increase across the service, just as they have in the general population. But she said it is impossible to know how many service members will contract the disease.

“There’s a lot we still don’t know about the virus,” Hogg said.

Local commanders have largely been granted leeway to make decisions about operations at their installations, including how much time pilots will spend in the cockpit for training flights throughout the virus breakout, Goldfein said.

The Air Force has made decisions to cancel or postpone some training, he said. For example, the service has canceled its major Red Flag-Alaska air wars event that was to be held for 10 days in May. The service has also postponed indefinitely Air Force Thunderbirds demonstration team events.

The Air Force also elected last week to send home the vast majority of the cadets studying at its Air Force Academy in Colorado.

Service leaders said basic military training will continue for now, as will most student-pilot training. Those missions were deemed essential.

Goldfein said recruiting stations across the country also remain open. But the service might move toward a larger focus on virtual recruiting methods, if the virus outbreak continues long term, he said.