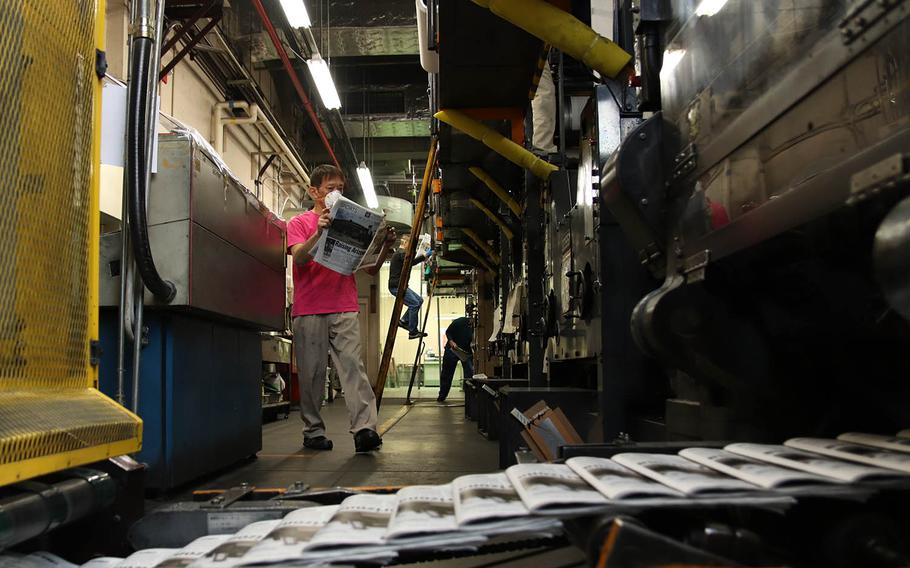 A group of House lawmakers expressed “strong opposition” to a planned funding cut for the Stars and Stripes news organization in a Wednesday letter to Defense Secretary Mark Esper.

“Beyond serving as a reminder of home, the journalists at Stars and Stripes provide over 1 million daily readers with unfiltered news and perspective free of institutional bias,” said the letter, signed by 10 U.S. representatives, all Democrats, including Rep. Jason Crow, D-Colo., a former U.S. Army Ranger; Rep. Ruben Gallego, D-Ariz., who served as an infantry Marine; and Rep. Adam Schiff, D-Calif.

Pentagon officials, in a memo sent to the newspaper’s leadership last month, ordered the organization to stop publishing “in all forms” by Sept. 30, the end of the current fiscal year. The paper was also told to submit a plan by Sept. 15 for closing the organization by January.

Esper proposed in his February budget submission for fiscal year 2021 to end about $15.5 million in funding for Stars and Stripes, telling reporters at the time the savings would fund “higher-priority issues” like purchasing modern weapons.

Wednesday’s letter is the latest expression of support for Stars and Stripes, which operates with partial support from the Defense Department. The rest of its budget comes from advertising and subscriptions.

On Friday, President Donald Trump tweeted that funding for the newspaper would not be cut “under my watch.” Days later, Senate Majority Leader Mitch McConnell, R-Ky., tweeted support for Stars and Stripes, saying it “has been a resource for the military community since the Civil War. I’m glad President Trump has committed that his administration will keep funding it.”

Last week, a group of 15 Republican and Democratic senators wrote a letter to Esper, urging him to reverse his decision to zero out Stars and Stripes’ budget. Sen. Lindsey Graham, a Republican and Air Force veteran, sent his own letter to the defense secretary last month, asking that the newspaper continue to receive support.

“We are pleased that the President has since committed to fully funding Stars and Stripes, though we note that there has been no official confirmation of this decision and that the President’s fiscal year 2021 budget eliminated funding altogether,” the 10 House lawmakers wrote Wednesday. “So that there is no further misunderstanding, we want to make it clear that we stand with the dedicated journalists at Stars and Stripes that have devoted their lives to providing unbiased news, and with the millions of Armed Forces members who benefit from their work. Any ill-fated attempts to undermine their mission or censor their work would meet staunch Congressional opposition and would assuredly be defeated.”

House lawmakers already have approved two bills that would provide funding for Stars and Stripes in fiscal year 2021. The bills now must be reconciled with the Senate.

House-passed versions of the fiscal year 2021 National Defense Authorization Act and the Department of Defense Appropriations Act each include $15.5 million for Stars and Stripes. The NDAA sets annual Pentagon policy and authorizes spending priorities while the appropriations bill funds the department.

“The experience of military service brings unique concerns that oftentimes only the journalists with Stars and Stripes have the understanding and direct access required to address,” the Wednesday letter said. “To meet the challenge of serving an audience stationed across the globe, including in combat zones, Stars and Stripes maintains thirteen international printing centers across three continents. No matter how far from home a servicemember may be stationed, they can be assured that they are still within the global reach of Stars and Stripes.”