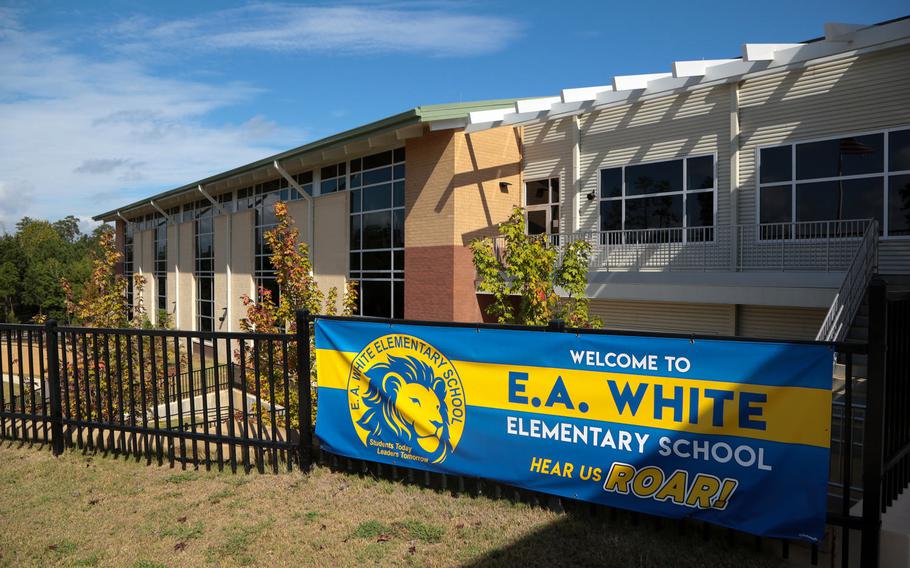 E.A. White Elementary School at Sand Hill at Fort Benning, Ga., opened in September 2018. Schools at Fort Benning are among Pentagon-run schools in the U.S. where teachers work an extra 30 minutes each workday without pay. (Markeith Horace/U.S. Army)

E.A. White Elementary School at Sand Hill at Fort Benning, Ga., opened in September 2018. Schools at Fort Benning are among Pentagon-run schools in the U.S. where teachers work an extra 30 minutes each workday without pay. (Markeith Horace/U.S. Army) 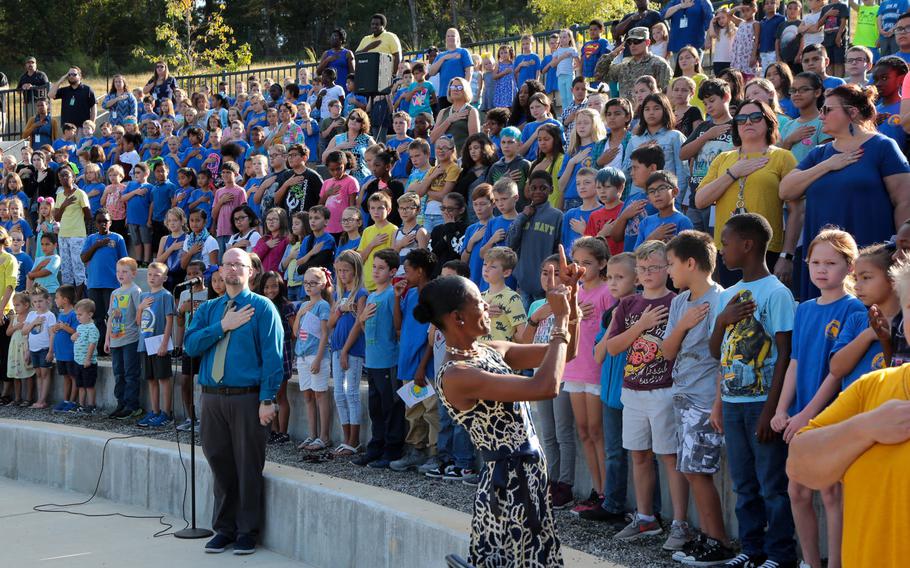 Administrators, teachers and students observe the national anthem in September 2018, while celebrating the opening of E.A. White Elementary School at Sand Hill at Fort Benning, Ga. Schools at Fort Benning are among Pentagon-run schools in the U.S. where teachers work an extra 30 minutes each workday without pay. (Markeith Horace/U.S. Army)

Teachers at stateside schools for military dependents are fighting a requirement that they work an extra 30 minutes most workdays without pay.

The Department of Defense Education Activity wants the 24 hours of unpaid work per quarter for professional development and says the teachers’ union agreed to the terms during negotiations for a long-delayed labor contract.

“The union agreed in writing, voluntarily, to the language that additional time would be without additional compensation,” said Ron James, chief of DODEA’s labor management and employee relations department.

But the union says it understood that teachers would only be asked to work unpaid occasionally, as part of a temporary agreement.

“What they said all throughout the contract bargaining was that they needed time for teachers to meet with administration, to do professional development, to meet with the general if the general came in,” said Jane Loggins, the Federal Education Association director for the Department of Defense Domestic Elementary and Secondary Schools.

“The whole time they were saying they needed flexibility,” Loggins said. “They didn’t ever say they wanted to extend every day by 30 minutes.”

The issue is at the heart of a bitter contract dispute between DODEA and the Federal Education Association, Stateside Region, which represents about 2,400 employees at Pentagon schools in the U.S., including Guam. The two sides haven’t agreed on a labor deal since the last contract expired in 2009.

DODEA added the work time last spring after a board that resolves federal labor disputes sided with the agency.

But the union says the unpaid hours are illegal because it never signed the new contract that contained the clause, an interpretation backed in January by an independent arbitrator.

“The decision … is a complete victory,” the union said in a statement following the nonbinding determination, which said that DODEA should comply with the old labor contract while negotiations continue. It also determined that DODEA should give back pay to all employees who worked extra hours without compensation.

DODEA has instead appealed to the Federal Labor Relations Authority.

“The arbitrator seems to be focused on his experience from the private sector where if a party says we don’t have an agreement there is no agreement,” James said. “It doesn’t quite work that way in the federal service.”

The extra work time allows teachers to improve classroom instruction by meeting with their colleagues, engaging in professional development and other tasks, DODEA spokesman Will Griffin said.

The additional time isn’t permanent but the agency has the discretion to use it, DODEA officials said.

“If we didn’t have the additional hours … it would have to be taken from instructional time,” James said. “Those are the two choices, really.”

The school system is in the third year of assessments to measure how well students are doing with new college and career standards, among other activities that require the additional time, Griffin said.

Ben Hunter, general counsel for the union, said that since the time was meant to be used only as needed, “requiring all the hours be used at all locations, every academic quarter” violates the spirit of the “now-voided” temporary agreement, he said.

Some stateside teachers say the time is being wasted on busy work that does nothing to enhance instruction or the time they spend with students.

They are “immediately directed to mandatory meetings, trainings, assigned collaboration sessions or assignments of other work,” Wilson said, and notes documenting what was discussed must be submitted.

The administration directs what’s to be done in the sessions with little input from educators, she said. An administrator once shut down a discussion about an upcoming field trip, saying they couldn’t be discussed during collaboration sessions, Wilson said.

Griffin said the sessions are meant to be “centered on student achievement” and there may have been a more appropriate time to discuss the field trip.

But other educators have said the sessions they’ve been in didn’t relate to student achievement.

At a Fort Jackson school in South Carolina, teachers were made to read the book “The Positive Dog” and then given chapters to perform in front of their colleagues and the principal, a union spokesman said.

Griffin said school leaders decided to incorporate two books by author Jon Gordon — “The Positive Dog” and “The Power of Positive Leadership” — into a training session to address issues raised by staff during school culture and climate surveys.