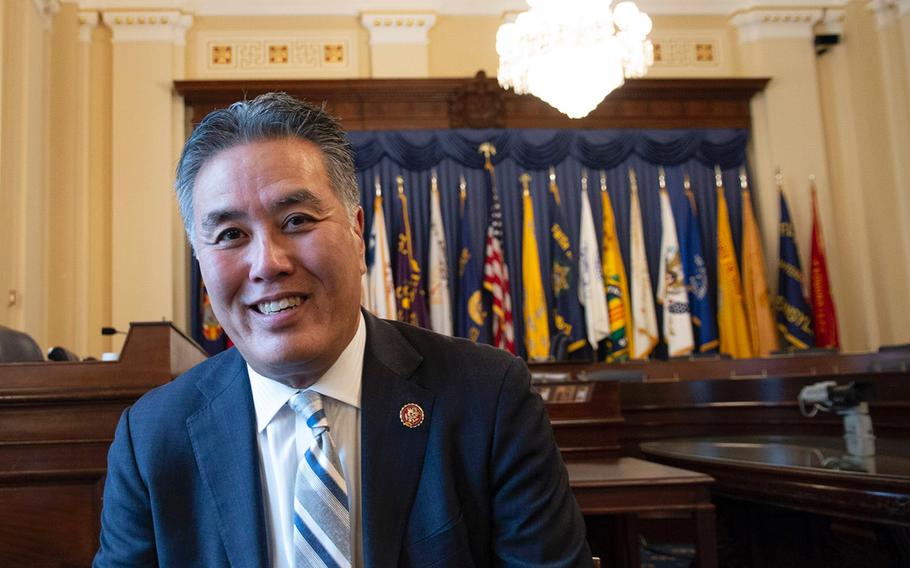 U.S. Rep. Mark Takano, D-Calif., poses for a photo shortly before taking over as the Chairman of the House Committee on Veterans Affairs in January, 2019. (Joe Gromelski/Stars and Stripes)

Takano, D-Calif., made the announcement during the American Legion’s national conference in Washington. He said he assigned Rep. Julia Brownley, another Democrat from California, to lead the task force.

“I’m pleased to announce that under my leadership we’ve established a women veterans task force to be led by Congresswoman Julia Brownley,” Takano said. “She’s going to be tasked with the known barriers to women accessing benefits. We want to be able to overcome those barriers, and we want to bring to the surface the barriers that we don’t know – the unknowns about our women veterans.”

The committee hired a female veteran to spearhead the effort, with the goal of identifying trends among women veterans and finding solutions for how the VA can provide them better service. Details about the makeup of the task force and the person hired for it weren’t available Monday.

As Takano took the helm of the committee last month, he promised more attention on the increasing diversity among veterans. He said he believed minority groups, including women veterans, have been overlooked.

About 10 percent of the roughly 20 million veterans in the United States are women, the VA reports. Pew Research Center estimates women veterans will increase to 18 percent by 2045.

Last year, the National Academy of Sciences, Engineering and Medicine concluded a 4 ½-year study of VA mental health services. In it, the 18-member committee that conducted the study addressed some barriers unique to women veterans.

“Women face unique barriers to mental health care at the VA, largely related to challenges associated with being a woman in a traditionally male-dominated system,” the report reads.

The committee found women veterans who served in Iraq and Afghanistan are more likely than men to believe they aren’t entitled to or eligible for VA mental health services. Women also reported frustration with having to prove to VA employees that they were veterans.

Committee members conducted site visits to VA facilities in 2015. In Cleveland, one female veteran told them that VA employees assumed she was a spouse. Another veteran said VA workers didn’t believe she was a combat veteran. Many female veterans also experienced cat-calls in VA facilities, which was particularly unsettling for women suffering from military sexual trauma, according to the report.

“[A] clinician in East Orange, New Jersey, said: ‘I think there are many, many people who fall through the cracks and don’t want to come here because they associate it with the very culture that traumatized them. That’s a huge barrier to treatment,'” the report states.

Earlier this month, the House acted to address the issue. The lower chamber passed the Veterans’ Access to Child Care Act, which would make permanent a pilot program the VA began in 2011 to provide child care for veterans who need the VA for intensive medical and mental health care, such as cancer treatment or care for post-traumatic stress disorder. Brownley introduced the bill.

“This is especially important for the growing population of women veterans who are more often taking care of young children,” Brownley said in a statement at the time. At the American Legion conference Monday, Takano noted the high number of women veterans struggling with military sexual trauma. According to the VA, about one in five women seen at VA facilities respond “yes” when screened for MST.

The VA Office of Inspector General reported last year that the VA wrongly denied benefits in fiscal year 2017 to thousands of veterans who claimed they suffer from MST.

The agency denied claims from veterans without following proper procedure, the IG found. Inspectors blamed the incorrect denials on flawed, inadequate training for veterans service representatives who comb through veterans’ records for signs of sexual trauma and make decisions about their claims.

Based on the findings, the inspector general asked the VA to review the thousands of claims that it denied in fiscal year 2017 and correct any mistakes. The agency estimated it would complete the review by Sept. 30.

The new women veterans task force will be launched officially in coming weeks.

A congressional hearing is expected this week to focus on Takano’s plan to create a vision for the VA extending to 2030. More attention on women veterans is part of that, he said.

“'VA 2030’ is a plan we are writing as we begin to surface how we need to be prepared by the year 2030 to have a VA that can truly serve our diverse veteran population,” Takano said. “That includes women, minorities and LGBT veterans.”