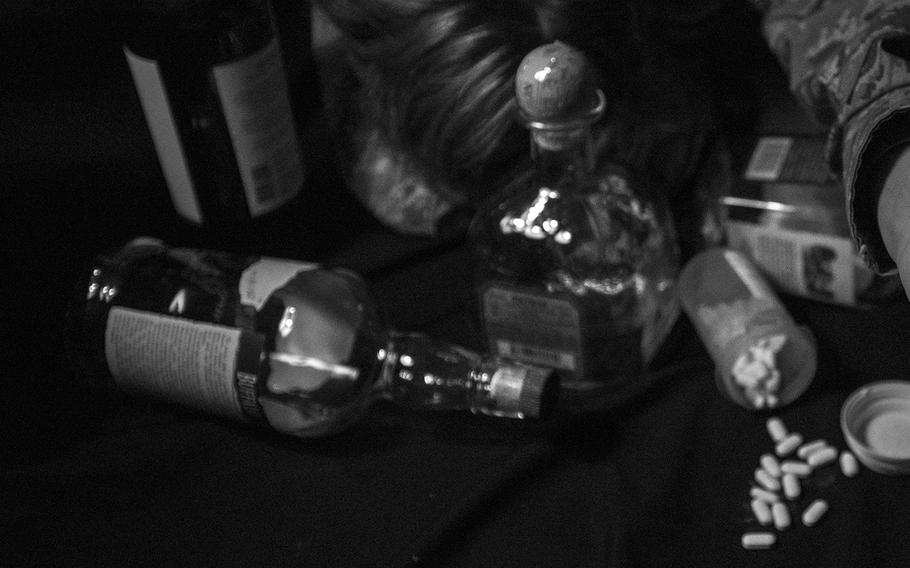 A report from the federal Substance Abuse and Mental Health Services Administration found that military wives are more likely than their civilian peers to abuse prescription medications meant to treat anxiety, attention deficit disorder and other psychological problems. They’re also more likely than other married women to suffer from mental illness, consume liquor and binge drink, according to the analysis. (Rustie Kramer/U.S. Air Force illustration)

WASHINGTON — Military wives are more likely to binge drink and experience mental health issues than other married women, according to the results of a survey from the Substance Abuse and Mental Health Service Administration.

The agency, which is part of the Department of Human Services, issues an annual National Survey on Drug Use and Health. This year’s report is the first one to contain specific information about military spouses and children of military personnel.

“We’re providing data on the military community that’s never been provided before,” said Brad Stone, a spokesman with the Substance Abuse and Mental Health Service Administration. “It’s providing a first look at this population. I think it’s going to be of value to those supporting servicemembers and families to address their behavioral health needs.”

The survey found 31.5 percent of military wives between the ages of 18 and 49 binge drink, defined as drinking five or more alcoholic drinks at one time, as opposed to 22.7 percent of all married women. But researchers said binge drinking results could be attributed to the fact that military wives tend to be younger – between the ages of 18 and 25 -- a group that is generally more likely to drink heavily.

Military wives are less likely to use marijuana – 5.1 percent of them did in the past year, while 8 percent of all married women did, according to the survey.

The report also states 29.1 percent of military wives experienced mental illness in the past year, compared to 19.7 percent of all married women.

The agency sought to find data on military spouses overall – not only wives – but there weren’t enough male military spouses who responded to the survey, said Rachel Lipari, the lead researcher on the project.

With military children ages 12 to 17, researchers were unable to find many differences than the general population of that age group.

Though much of the data wasn’t statistically significant this year, Lipari said, as military spouses and children are included in surveys over time, there will be more to report.

Some people in the healthcare field have questioned what unique hardships the group might have, with prolonged absences of loved ones and the frequent moving that comes with military service, a summary of the report states. As more information about the population is identified, more can be done preventatively, Lipari said.

Findings from each year’s survey are sent to preventative health specialists.

“As we are able to combine years of [surveys] together, we’ll have a larger pool of respondents to analyze,” she said. “We’ll be able to detect more differences.”