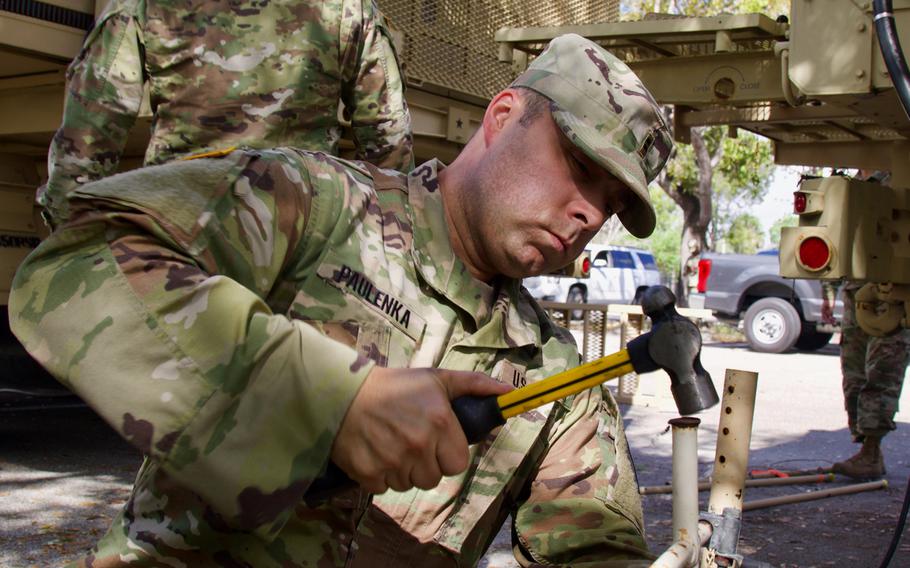 The call to approve federal funding for all of the more than 10,000 National Guard members activated to combat the coronavirus pandemic is growing among governors and lawmakers on Capitol Hill.

“Thousands of National Guard troops have been activated under [state active-duty] status and state governments are already struggling to cover the costs of emergency response operations required by the ongoing [coronavirus] crisis,” Sen. Tammy Duckworth, D-Ill., wrote in a letter Tuesday to President Donald Trump asking him to grant all states Title 32 status, which allows for troops to remain under the control of a state’s governor, but funded by the federal government.

Trump on Sunday approved federal funds to support the Guard in the three states most heavily impacted by the virus, which has infected more than 62,000 Americans and killed more than 860 as of Wednesday.

California, with about 500 troops activated; New York, with about 2,100; and Washington state, with a handful of full-time personnel working within the state emergency operations center, make up more than 25% of all troops working in some capacity in all 50 states, three U.S. territories and Washington, D.C.

“The policies that I am requesting you implement will provide states with certainty, and more importantly, critically-needed financial relief,” wrote Duckworth, a combat veteran and retired lieutenant colonel. She deployed in 2004 as a Blackhawk helicopter pilot with the Illinois National Guard, which has more than 200 troops activated for coronavirus response.

The National Governors Association last week made a similar call to Trump.

“All our citizen-soldiers who are stepping up in each of the states need the exact same help so [the Federal Emergency Management Agency] and the federal government can help cover the costs of the National Guard’s important relief missions,” Maryland Gov. Larry Hogan, who serves as the chairman of the association, said last week during a news conference.

“It’s so important for the National Guard to be granted Title 32 authority during this nation-wide crisis,” he said. “Title 32 authority is operationally efficient and provides much needed protections to our Guard members."

Hogan, who has activated more than 1,600 Guard members, said Wednesday that the states are still awaiting final action.

All state governors are able to apply for the Title 32 status through FEMA, Air Force Gen. Joseph Lengyel, chief of the National Guard Bureau, said Tuesday during a news conference.

“We're working through those issues now as states submit their requests through FEMA to be in concert with the president's guidance,” Lengyel said. “It has to be a FEMA approved mission. But as those get approved, I would think that even more National Guard members will come on duty faster and sooner.”

As negotiations continue in Congress, governors are continuing efforts that will pave the way for federal military work to occur within their states. Eight states — California, Colorado, Massachusetts, Maryland, New York, Oklahoma, South Carolina and Washington — have approved the use of dual-status commanders, who can command National Guard and active-duty military troops.

New York, which has nearly half of all U.S. coronavirus cases, and Washington state, which has more than 2,400 cases, will soon see active-duty troops deployed as the Army announced Tuesday that it is sending three medical field hospital units to the two states.

Other states leaning on National Guard support in large numbers include Louisiana with more than 625 activated personnel, Florida with nearly 1,500 and Ohio with more than 400.

Kentucky, which has about 40 soldiers and airmen activated, has identified they could pull in about 5,000 of its 7,500 members to combat the virus, said Maj. Stephen Martin, a Kentucky National Guard spokesman.

“We’ve tried to identify those service members who are already providing support to the state as first responders, medical personnel, etc.,” he said. “Additionally, we’ve worked to identify those who are taking care of elderly grandparents or immune-deficient children as well to try to avoid calling them up.”

The Senate has yet to vote on the third phase of coronavirus relief, which will then need to go to the House for approval.