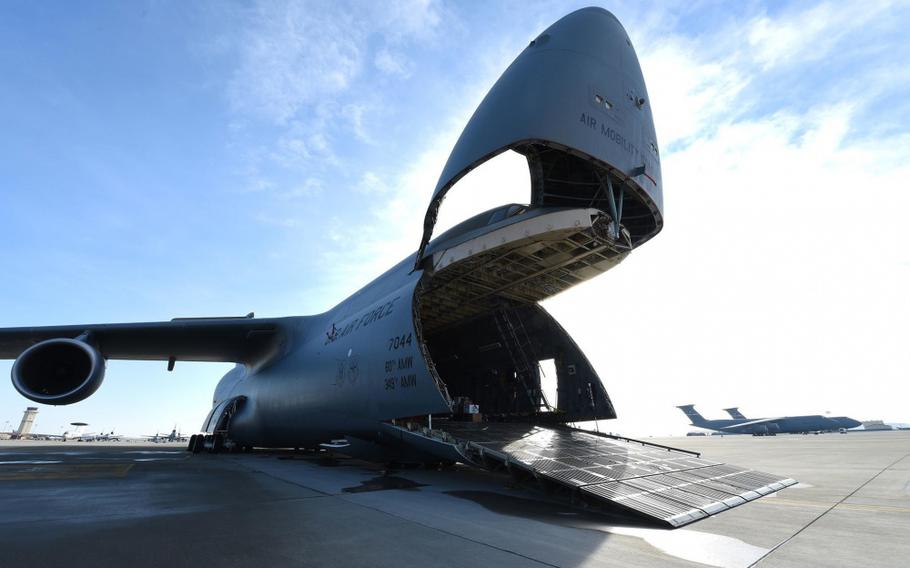 A C-5M Super Galaxy cargo plane made an emergency landing at Travis Air Force Base Thursday with its nose gear unextended due to a malfunction, the Air Force said Friday.

The Super Galaxy, the largest plane in the Air Force fleet, arrived at the California base at about 7:45 p.m., according to an Air Force statement.

None of the plane’s 11 crew members, assigned to the 349th Air Mobility Wing, were injured in the emergency landing.

The cause of the incident is under investigation, the Air Force said.

“Initial reports indicate that it was a hydraulic issue; however, that’s always subject to change pending the safety investigation,” said Capt. Lyndsey Horn, a spokeswoman at Travis.

The Facebook page Air Force amn/nco/snco first reported the emergency landing and published an internal Air Force memo stating that the aircrew had trouble with the front landing gear’s hydraulic system. Despite radioing ahead for a solution to the jammed landing gear, crew members were unable to make it function, the memo said.

The plane was returning on a contingency mission delivering equipment to the U.S. Central Command area of responsibility, Horn said. That area includes Iraq, Afghanistan and Syria.

On the return trip, the plane stopped at Colorado Springs, flying from there to Travis, she said.