Study: Psilocybin in psychedelic mushrooms may be more effective than leading antidepressant Psilocybin, the active compound in psychedelic mushrooms, may be more effective than a leading antidepressant medication in treating clinical depression, according to a study published April 15, 2021. (Thomas Angus/Imperial College London)

Psilocybin, the active compound in psychedelic mushrooms, may be more effective than a leading antidepressant medication in treating clinical depression, according to a study published April 15, 2021. (Thomas Angus/Imperial College London) 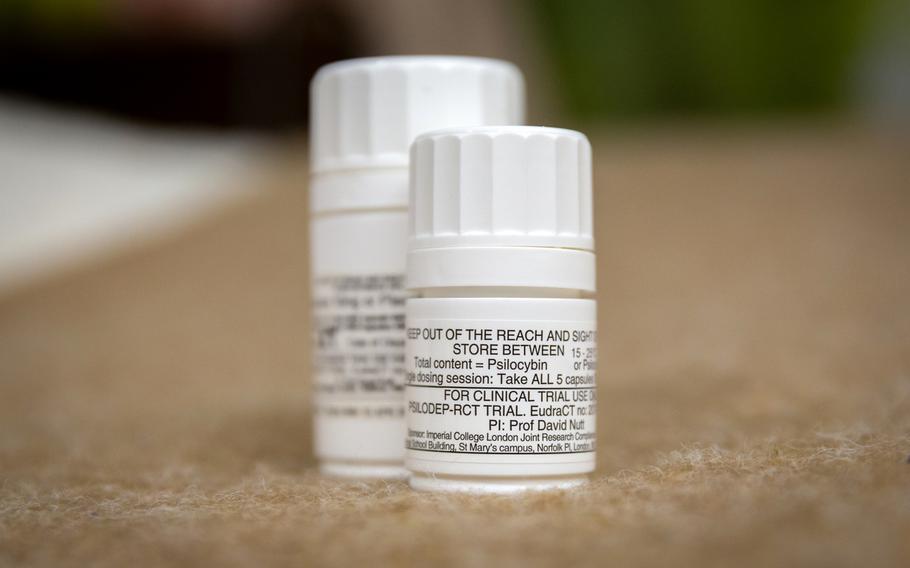 Psilocybin capsules were used in a clinical trial that found that the compound in psychedelic mushrooms may be more effective at treating clinical depression than a common antidepressant. The researchers at Imperial College London in the U.K. warn that patients with depression should not attempt to self-medicate with psilocybin. (Thomas Angus/Imperial College London)

The active ingredient in psychedelic mushrooms may be more effective at treating depression than a leading antidepressant, a study has found, potentially opening up new avenues of treatment for troops who suffer from the debilitating condition.

The severity of depressive symptoms dropped by at least half in 70% of people who were given psilocybin in clinical trials conducted last year at Imperial College London, the study published Thursday in the New England Journal of Medicine said. Only 48% of a group that took the common antidepressant escitalopram saw a similar decrease.

Thirty of 59 patients were given two separate doses of 25 milligrams of psilocybin at three-week intervals, and took a daily placebo for six weeks. The others received two much smaller doses of psilocybin — 1 mg — three weeks apart and took escitalopram, which is marketed under brand names like Cipralex and Lexapro, daily for six weeks.

All the patients had long-term, moderate to severe clinical depression and received psychological counseling throughout the study.

In addition to showing larger reductions in depressive symptoms, the psilocybin group reported greater improvements in their ability to cry or feel compassion, intense emotion and pleasure, the study said. They also said they felt less drowsy than those who took escitalopram.

“These findings provide further support for the growing evidence base that shows that in people with depression, psilocybin offers an alternative treatment to traditional antidepressants,” said professor David Nutt, principal investigator on the study and the Edmond J. Safra Chair in Neuropsychopharmacology at Imperial College London.

Martinez said he believes psilocybin mushrooms helped save his life when he felt depressed, after losing both legs and an arm to an improvised explosive device in Afghanistan. Opponents of the bill said decriminalization could lead to more deaths by poisoning.

A study published in Military Medicine in 2012 estimated that 12% of deployed, 13% of previously deployed and just under 6% of never deployed military personnel have clinical depression.

The Imperial College researchers are calling for a larger study to be conducted into the effects of psilocybin on mental health.

“We look forward to further trials, which if positive should lead to psilocybin becoming a licensed medicine,” Nutt said.

Until then, however, the researchers are advising against self-medication with magic mushrooms to treat depression.

Taking mushrooms found while foraging in the woods “might not have a positive outcome,” they said, stressing that the study was conducted under strict clinical guidelines.