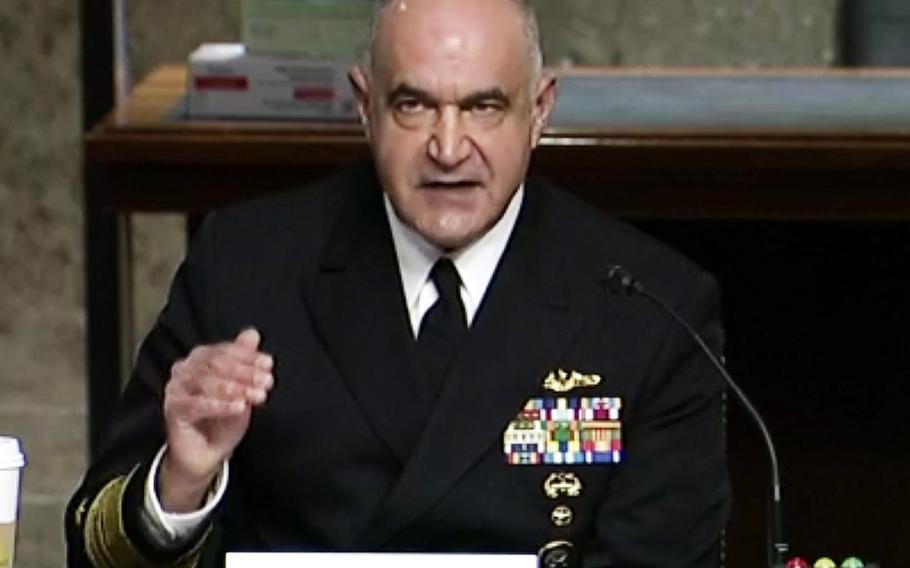 The Chinese military’s nuclear capabilities are increasing rapidly and, for the first time, might be primed for use, the U.S. military officer in charge of America’s nuclear arsenal warned Tuesday as he urged Congress to upgrade America’s aging nuclear infrastructure.

In an effort to describe how quickly the Chinese nuclear program is advancing, Adm. Charles Richard, the commander of U.S. Strategic Command, told the Senate Armed Services Committee that he had just ordered all briefs on Beijing’s nuclear weapons contain no intelligence information vetted more than one month earlier “because it's probably out of date” that quickly.

Richard testified Tuesday that China is capable of accurately deploying nuclear weapons anywhere within its region, and it “will soon be able to do so at intercontinental range.”

“I can't get through a week right now, without finding out something we didn't know about China,” Richard told senators in a hearing alongside Army Gen. James Dickinson, who leads U.S. Space Command. Dickinson also fingered China as among his top military concerns, as it rapidly advances its space-based military capabilities.

In a stark warning, Richard told lawmakers that he had seen indications China had moved at least some of its nuclear forces from a peace-time status to a so-called “launch-on-warning” and “high-alert” posture, in which weapons are armed for launch as soon as an incoming enemy missile is detected.

Yet, even as China’s nuclear weapons arsenal has grown dramatically, Russia remains the primary nuclear threat for the United States, Richard said. While the U.S. has yet to field any recent updates to its nuclear forces, Russia is about 80% complete in modernizing its nuclear capabilities, the admiral said.

“While we are at 0% [modernization], it is easier to describe what they’re [Russia] not modernizing — nothing,” he said. “What they are [upgrading] is pretty much everything, including several never-before-seen capabilities.”

Those increases among the primary U.S. adversaries come as Congress debates funding for long-planned upgrades to America’s nuclear triad — its system of intercontinental ballistic missiles and its fleets of nuclear-capable bomber aircraft and ballistic missile submarines — and as President Joe Biden’s administration reviews the nation’s nuclear strategies, as incoming administrations typically have done.

Richard said he supported the ongoing review, but he cautioned against some lawmakers’ recent targeting of the Ground Based Strategic Deterrent, the planned $95 billion replacement for the military’s 1970s-era Minuteman III ICBMs, as a potential cut to save money. Several Democrats, including Sen. Elizabeth Warren of Massachusetts on Tuesday, have questioned the need for upgraded intercontinental ballistic missiles.

The Minuteman III missiles must either be replaced by the GBSD or retired, Richard said, calling them “leftovers of the Cold War” that have become too obsolete to be life-extended with temporary fixes.

Without ICBMs, the United States would be forced to change drastically its approach to nuclear operations, Richard said. It could leave America entirely reliant on its submarine force to deter enemy nuclear activity because the United States since the end of the Cold War has not maintained bomber aircraft on nuclear alert.

“I’ve already told the secretary of defense that under those conditions, I would request to re-alert the bombers,” he told senators Tuesday, which would place some of the Air Force’s B-52 Stratofortress and/or B-2 Spirit bombers armed with nuclear weapons and prepared to fly at all times.

Richard urged senators to watch the actions of the Chinese and Russians to modernize their nuclear forces as they debate the future of the U.S. nuclear deterrent.

“It’s the only weapon system you don’t have to pull the trigger on for it to work,” he said of the nuclear weapons that he oversees.