The service was established Dec. 20 with a force of 16,000 military and civilian personnel, as part of the National Defense Authorization Act for Fiscal Year 2020. (U.S. Space Force)

The service was established Dec. 20 with a force of 16,000 military and civilian personnel, as part of the National Defense Authorization Act for Fiscal Year 2020. (U.S. Space Force) 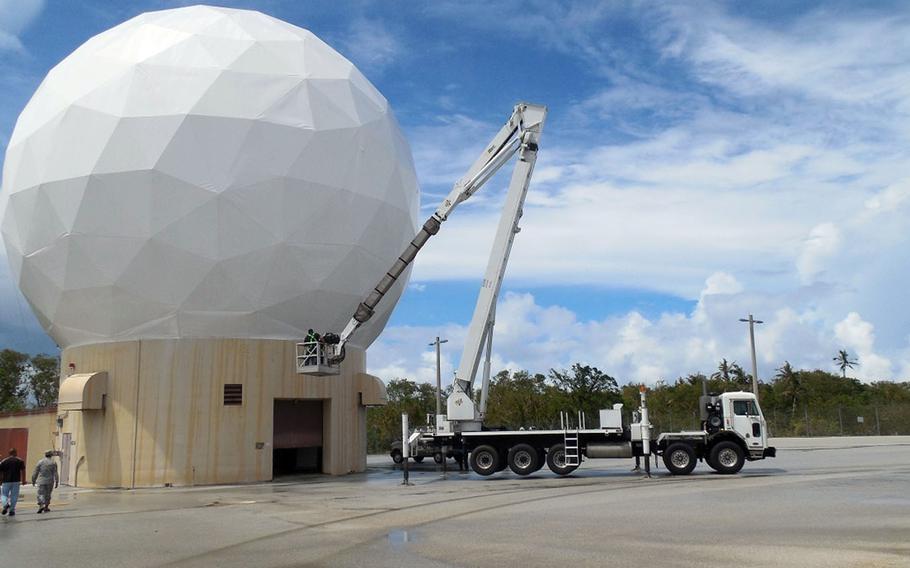 The Space Force may be the U.S. military’s youngest service branch, but it already has 10 units based outside the continental United States, along with facilities in Greenland, the United Kingdom, Ascension Island, Diego Garcia, Alaska, Hawaii and Guam.

The service was established Dec. 20 with a force of 16,000 military and civilian personnel, as part of the National Defense Authorization Act for Fiscal Year 2020. The Pentagon’s first Space Force budget proposal calls for $15.4 billion in 2021.

It’s still a work in progress, according to the official Space Force website. The number of active duty troops wearing the Space Force uniform was 90 on Monday, although personnel from other branches are assigned to the service, according to Space Force spokeswoman Lynn Kirby.

“Because of the military, security and economic importance of space operations, most large powers currently have global facility networks, and the U.S. is no different,” military technology expert and Arizona State University engineering professor Braden Allenby said in an Aug. 7 email.

Headquartered at the Pentagon, the Space Force mission is to organize, train and equip forces to protect U.S. and allied interests in space and to provide space capabilities to other branches of the military, according to its website.

The force is charged with “maintaining and enhancing America’s competitive edge in space while adapting to new strategic challenges,” the site states. “Maintaining space superiority is an emerging capability required to protect U.S. space assets from hostile attacks.”

The Space Force operates satellites and ranges used to launch military and commercial missions, provides satellite communications and navigation to the military and monitors ballistic missile launches worldwide. Its motto, “Semper Supra,” translates as “always above.”

At home and abroad The only Space Force locations identified on its website are Buckley, Schriever and Peterson Air Force bases, all in Colorado; Los Angeles and Vandenberg Air Force bases in California; and Patrick Air Force Base, Fla.

However, a list of overseas Space Force units and facilities provided by the service Aug. 6 reveals a sizable presence.

Ascension Island in the Atlantic Ocean is a base for Detachment 2, 45th Space Wing and a mechanical radar that does space surveillance. Andersen Air Force Base, Guam, is home to a satellite tracking station that’s part of the Air Force Satellite Control Network and manned by Detachment 5, 22nd Space Operations Squadron.

“There are no immediate plans to expand the Space Force overseas presence beyond what exists today,” Kirby said in an Aug. 6 email.

There are, however, units involved in space operations attached to other service branches overseas.

For example, at Misawa Air Base in northern Japan, the Joint Tactical Ground Station, Delta Detachment, is an element of the Army’s 1st Space Battalion, 1st Space Brigade, according to Misawa’s official website.

Ballistic missile tracking is an important task in a part of the world where North Korean missiles have flown overhead in recent years.

The nuclear-armed North Koreans have conducted a number of missile tests over Japanese territory, most notably firing intercontinental ballistic missiles in 2017. The missile tests, experts warned at the time, demonstrated that a North Korean weapon could potentially reach the continental United States.

No information will be available on future overseas basing for Space Force units until formal agreements are reached between the U.S. and allied countries, Kirby said.

Tracking stations Most of the overseas Space Force facilities are likely tracking stations under U.S. control that were ready to switch over to the new service, according to Ralph Cossa, a former Air Force officer serving as president emeritus of the Hawaii-based Pacific Forum think tank.

“I would expect more to follow as the mission and assets are better identified,” he said in an Aug. 6 email, but added: “I’m not convinced we even needed a Space Force — we are just adding more stovepipes — but if we are going to have one it needs worldwide assets.”

Overseas military space facilities do everything from track satellites to monitor communication traffic, participate in intelligence activities and support missions that require the use of space-based assets or functions, Allenby said.

The increasing importance and ubiquity of space operations are among the primary reasons for the Space Force, he said.

“The Space Force is, however, in the early stages of being created, and the initial process involves shifting a number of [Air Force] specialties and existing units over to the new entity,” he said. “The majority of the new Space Force is centered on domestic bases.”

There are many existing units outside the continental U.S. being shifted over as well, Allenby said, reflecting the global infrastructure necessary to support a world-power space program.

“Because this is only the initial phase … the global distribution of assets we see today is necessarily somewhat arbitrary and ad hoc,” he said.

The space environment from a technological and geopolitical perspective is evolving rapidly and somewhat unpredictably, so there’s likely to be continual change in where the force is based, Allenby added.

“I would anticipate that, after the initial consolidation, we’ll see a more strategic and considered distribution of resources and facilities, which may look very different than what we have today.”

Bases in outer space? Will the Space Force eventually have off-world bases? It’s not implausible since the service supports NASA, which aims to return Americans to the moon by 2024 and use what it learns there as a springboard for a manned trip to Mars.

“The way space science and technology is evolving, especially given geopolitical tensions, suggests that it might not be long before not just the [Space Force], but our adversaries, are creating bases in near space, and perhaps the moon,” Allenby said.

However, a treaty signed by the U.S. and in effect since 1967 mandates that the moon be used for only peaceful purposes, and specifically forbids the “establishment of military bases, installations and fortifications,” along with weapons testing or military maneuvers.

Some trends suggest the future could look somewhat different. For example, military operations and bases in space might require private/public/military organizations and staffing, he said.

“Given how poorly designed the human body is for space, one would not be surprised to see humans, directly wired into space technology, viewing their new operating environment through the eyes and senses of robots,” he said. “I’d expect a lot of space operations and even presence, such as bases, will involve a lot more robotics than people over time.”