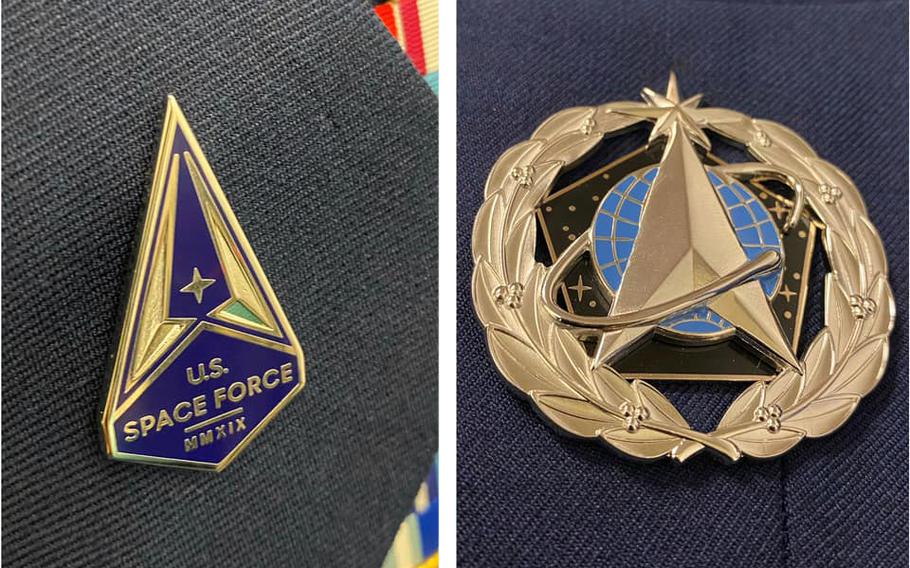 The Space Force lapel pin. left, and the service badge, right, will be how service members in the newest military branch distinguish themselves from airmen for now. (U.S. Space Force)

WASHINGTON — Space Force service members will soon get lapel pins and service badges to wear on their Air Force dress uniforms to better distinguish the branches.

“This is how we’re going to space up the Air Force uniform while we’re wearing it,” Towberman said last week in a video announcing the new pin. “It doesn’t mean we’ll carry this onto a Space Force uniform when it’s designed.”

He said the specific policy on the appropriate way to wear the pin and badge will be out later this month. In the announcement, Towberman was wearing the service badge in the middle of his chest pocket and the pin on the middle of the collar.

Troops in Space Force also wear the Operational Camouflage Pattern, or OCP, as the normal duty uniform, the same uniform worn by the Army.

The OCP uniforms are worn essentially the same way as the Army. However, tapes and badges will have “space blue” embroidery. Troops also will wear a space blue name tape on the back of their patrol caps, according to regulations published in August.

Space Force also does not yet have its own uniform for physical training.

Space Force has roughly 2,000 personnel, most of whom are transfers from the Air Force, though the service has recently started enlisting new recruits. Space Force hopes to recruit 300 enlisted service members in 2021 and reach 6,500 members overall in a year. Most will come from Air Force transfers.