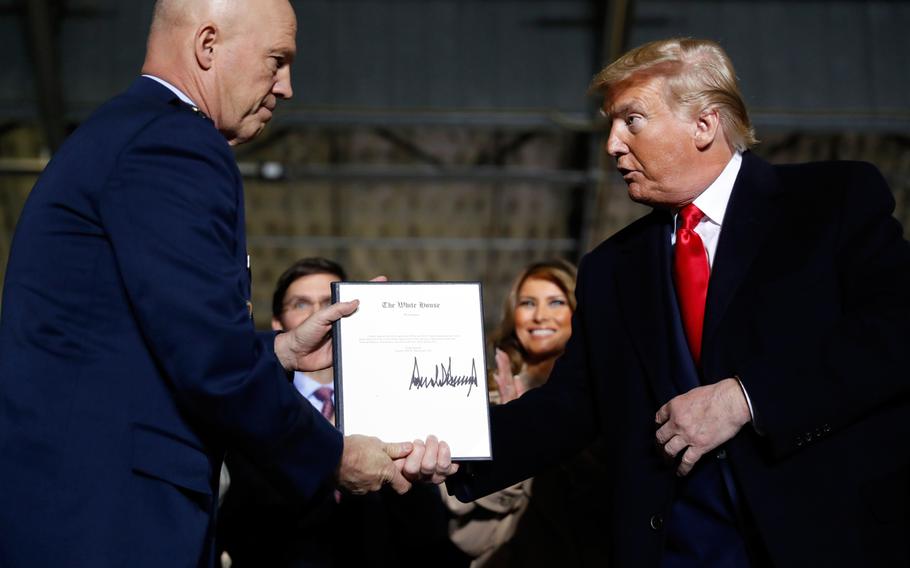 President Donald Trump shakes hands with Gen. Jay Raymond, after signing the letter of his appointment as the chief of space operations for U.S. Space Command during a signing ceremony for the National Defense Authorization Act for Fiscal Year 2020 at Andrews Air Force Base, Md., Friday, Dec. 20, 2019. (Andrew Harnik/AP)

WASHINGTON — The U.S. Space Force now exists, but it could be months before it has its own troops.

The sixth branch of the U.S. military became reality Friday evening when President Donald Trump signed into law the fiscal year 2020 National Defense Authorization Act, the yearly bill that sets Pentagon policy. The NDAA directs the Pentagon to create the Space Force, which is the first new branch of service since the Air Force was carved out of the Army Air Corps in 1947.

Top Air Force officials on Friday described the Space Force’s birth as a historic moment that signaled how important space operations are to the nation. It comes at a critical time as China and Russia hone their own space abilities and close a capabilities gap in the domain that the United States has long dominated.

“Let there be no mistake, the United States is the best in the world in space today, and today we’re even better,” said Air Force Gen. Jay Raymond, the commander of U.S. Space Command, who has led Pentagon efforts in space for months and who Trump picked Friday to be the first commander of the Space Force. “The United States Space Force will ensure that we compete, deter and win from a position of strength in securing our way of life and our national security.”

Space Force now exists on paper, but it is staffed almost entirely by troops who, for now, will remain in the Air Force. Many other decisions remain about the service, its makeup and its culture. Congress gave the Defense Department 18 months to build the service. Decisions on uniforms, insignia, marketing strategies, rank structure and even who exactly will become a member of the Space Force all have yet to be made.

Those details are “not something we’re going to be able to roll out on Day 1,” Raymond said. “This is really important for our nation. I can’t foot stomp that enough … It’s critical that we get this right.”

Though the concept of an independent military branch focused on space was initially opposed by many in the Pentagon, the idea was championed by Trump and Vice President Mike Pence. Eventually, top officials, including secretaries of defense and the Air Force, warmed to the idea, especially once it became clear the service would fit within the Air Force Department, in a way much like how the Marine Corps sits inside the Navy Department.

“It’s something incredible. It’s a big moment and we’re all here for it,” Trump said just before signing the NDAA into law at Joint Base Andrews in Maryland. “Space — there’s going to be a lot of things happening in space.”

Trump said the United States would soon be “leading by a lot in space,” noting he and Pence found early in their administration a “spirit” and “love” for the idea of a Space Force that would be “important to our defense, to our future, and [that would] blend in so well into our military.”

Space Force’s creation marks the second major organizational change for the Defense Department in 2019 focused on space. In August, the Pentagon created Space Command, the new warfighting command and control headquarters focused on all military operations related to space. Senior Air Force officials said Friday that the Space Force ultimately will be charged with providing trained and equipped operators for Space Command to use to defend U.S. assets in orbit.

But for now, Space Force will consist almost entirely of the roughly 16,000 active-duty and civilian Air Force personnel who have been assigned to Air Force Space Command. That unit was essentially pulled out of the Air Force and rebranded as the Space Force in the NDAA by lawmakers. Senior Air Force officials said Friday that the initial group includes about 3,400 Air Force officers, 6,200 enlisted airmen and some 8,000 civilian personnel.

Many of those active-duty airmen are likely to be transferred into the Space Force in the coming months, however these senior officials, who spoke on the condition of anonymity because of the sensitivities with building the new force, said the Pentagon is still planning how that process would work.

The officials said sometime within the next few months some 15,000 to 16,000 Air Force space operators -- officers and enlisted troops -- will be given the opportunity to transfer officially into the new service. The officials said Space Force would not include its own support troops – such as cooks, doctors, police, chaplains and logistics specialists – within its ranks, and instead it would really on the Air Force to provide such personnel in an effort to keep the force small and specialized.

Space Force at some point could also absorb some or all of the space operations troops now in the Army and the Navy, said Air Force Secretary Barbara Barrett. But she admitted it could be years before such a move is approved.

Also clear is the Space Force will be headquartered, like the other military services, at the Pentagon. But Air Force officials said they do expect to rename several of the service’s bases that focus largely on space operations to reflect their movement into Space Force. Those bases include Peterson, Schriever and Buckley Air Force Bases in Colorado, Vandenberg Air Force Base in California, Patrick Air Force Base in Florida, and “some others,” Raymond said.

Congress provided the Pentagon about $40 million to jump start Space Force in its appropriations bill passed this week. Raymond, Barrett and the other officials declined to discuss in detail their funding plans, including whether the department would submit a Space Force budget proposal for fiscal year 2021 separately from the Air Force budget. Those proposals are expected to be made public in February.

Defense Department estimates released in March determined the Pentagon would need about $2 billion for the next five years to build the service.

Raymond and other officials said Friday that they had heard from dozens of individuals interested in joining the Space Force. Air Force officials said an information and recruiting page for the new service would be added to the Air Force’s website Friday night.

“There’s an incredible excitement across our service about the Space Force,” Raymond said. “This is an exciting time to be in our business.”