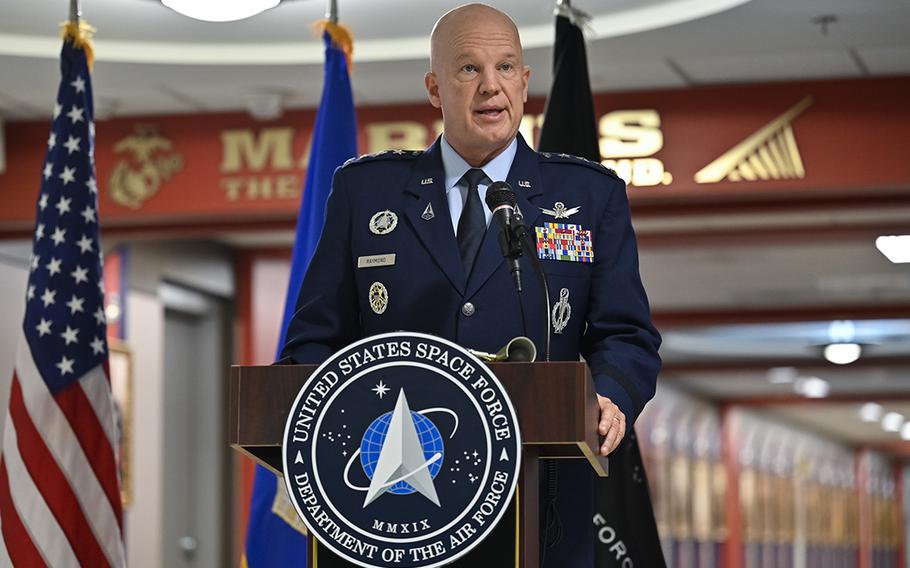 WASHINGTON — Just like the rules of the road and laws of the sea, Space Force commander Gen. John Raymond wants to see guidelines established for operating in space as more countries increase their involvement commercially and militarily.

“There are really no norms of behavior in space. It’s the Wild, Wild West,” Raymond, the chief of space operations for the force, said Wednesday during a virtual event with the National Press Club in Washington.

Space Force is now in its second year of existence. The service has grown from one person — Raymond — to enlisting and commissioning about 600 new members each year. The newest U.S. service branch also has been working with American allies, including the United Kingdom and France, that are establishing their own versions of a Space Force.

Space is becoming more competitive as commerce and military activity increases, Raymond said. The U.S. and its allies also face a number of threats, especially from China, which is developing space capabilities and technology including jammers that affect communication and global positioning satellites, lasers that can damage satellites, and missiles that can destroy satellites in low orbit, he said.

“So they’ll enjoy the same benefits that we’ve enjoyed by integrating space into our way of war and our way of life. But most concerning is that they’re developing a spectrum of threats to negate our access to space and to keep our nation and our allied partners from being able to realize the benefits that we derive from those space capabilities,” Raymond said.

He would not say Wednesday whether an attack on a satellite would constitute an act of war, but it would depend on the larger picture of what is happening in the world.

“In my opinion there’s no such thing as a space war. It’s war,” Raymond said. “And nations might choose to conduct operations in that war…either on the sea, or in the air, or on the ground, or now in space. And so, I think just like every other traditional domain of warfare, this is just integrated into that larger strategic conflict.”

The first U.N. treaty to address space was the Outer Space Treaty from 1967, and it includes principles such as not placing nuclear weapons in space and that celestial bodies such as the moon could not be militarized. Four other U.N. treaties also govern space law, with the last one enacted in 1984.

“Other than that, there’s no rules. We really believe — I really believe — there needs to be some rules [on] safe and professional conduct. I think our allies and partners that we operate with also think that,” Raymond said.

Space Force is working on developing those norms of behavior for operating in space. Raymond said Space Force is transparent about operating in a safe and professional manner, though he understands that others might not follow the U.S. lead.

“I’m not naive to think if there was a set of norms of behavior that everybody’s going to follow them,” he said. “But I do think if you have those rules, it will help identify those that are running the red lights, if you will. And I think that would be important.”