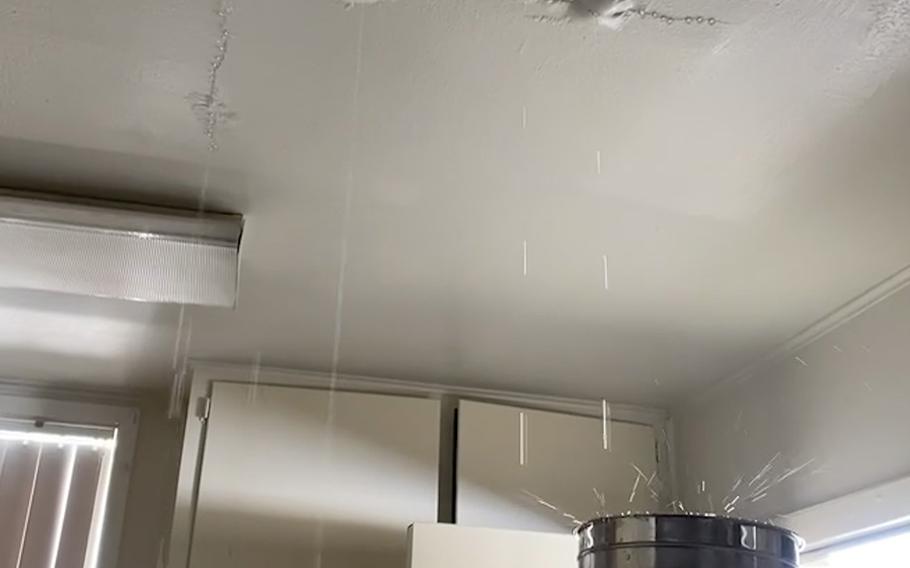 Fort Hood Family Housing had 238 active emergency calls as of Wednesday, mostly plumbing related, as the Texas Army base struggles with freezing temperatures that have gripped the region for nearly a week. Some base houses, including Melissa Sampson’s home, have had pipes freeze and burst, despite taking precautions to prevent it. (Melissa Sampson) 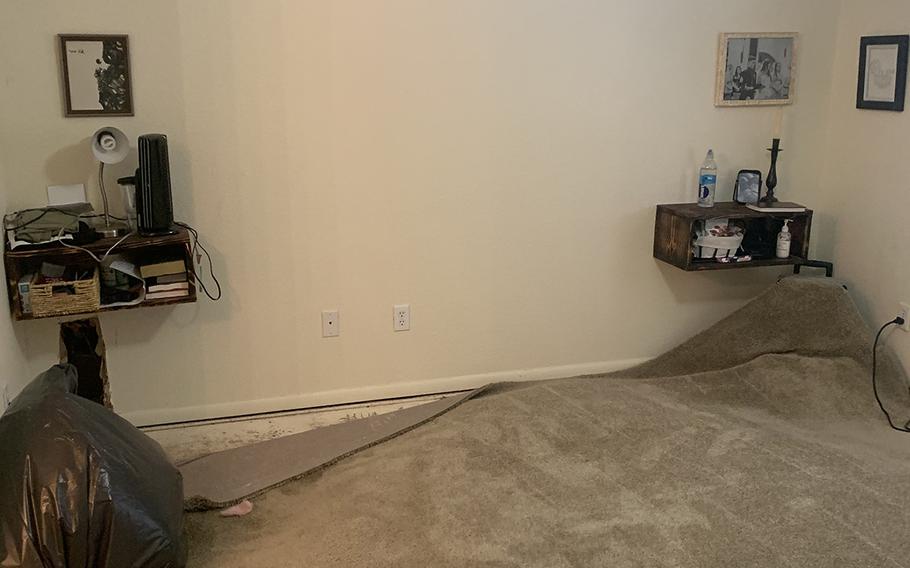 Some families at military bases caught in this week’s freezing temperatures are faced with moving from base housing due to broken water pipes and no utilities, while others are banding together to support one another during the crisis.

At least eight bases remained closed Thursday in states including Texas, Oklahoma and Louisiana, with many preparing to stay closed Friday. Most will spend an entire week with only essential personnel on base as extremely cold weather has created dangerous conditions across southern portions of the country. The region is not accustomed to multiple days of below freezing weather, snow or substantial ice accumulation, which has led to unnavigable roads, broken water pipes and overwhelmed utilities.

Winter weather struck the region one week ago, bringing unusually cold temperatures that will last for a week. As of Thursday, more than 100 million people were under some type of winter weather warning, watch or advisory, The Associated Press reported.

On Tuesday, as the winter storm stretched across much of the lower 48 states, more than a dozen bases across the country, including Fort Hood in Texas, Fort Drum in New York and Fort Campbell in Kentucky, closed because of dangerous conditions. While some have gotten a break from the storm, the system is forecasted keep bitter cold in the south Thursday before moving toward the northeast, The AP reported.

By Saturday, much of the cold air is expected to pass with temperatures returning to seasonal averages.

But the circumstances have caused significant demand for emergency services at base housing under conditions that make it dangerous for maintenance crews to reach families.

Fort Hood Family Housing, managed by the private company Lendlease, had 238 active emergency calls as of Wednesday, mostly plumbing related, officials at the Army base said. The public works department at the base, which manages barracks and work facilities, received 400 priority work orders Tuesday. An average day brings in 40, base officials said.

Six families have been moved and another seven are pending relocation, according to Lendlease.

“We are working closely with Fort Hood Department of Emergency Services to ensure our teams can travel safely on post to respond to residents,” according to a statement provided by Lendlease. “We are supplementing our current team with outside contractors given the impact the weather has had on the area and the calls we’re responding to.”

Melissa Sampson, an Army spouse at Fort Hood, said a pipe in her shared kitchen and laundry room burst Monday.

“Within seconds, water just started pouring out of the ceiling,” she said.

Sampson, her command sergeant major husband and their 13-year-old daughter started to clean the mess while also trying to call the emergency housing maintenance line, but water quickly flowed into most of her cabinets as they fought to keep it from spreading to other rooms in the house.

The first worker arrived with the wrong key needed to shut off the water, so it continued to gush for about two hours, Sampson said. Once shut off, the crew immediately left to address similar problems at two other homes on her street.

The family stayed in the home, though they are without water and have no idea when it will return.

Sampson said she doesn’t know how long her family must live like this. Lendlease sent an email for residents stating if they don’t get a call by Friday to wait one more week before trying to reach out to the housing office.

“I know that we’re in a good place in the fact that we did not have a total loss in a huge amount of our belongings. We lost food, but if we didn’t have a [wet and dry vacuum] and a teenager, we would have been a lot worse,” Sampson said. “In our circumstances we are OK, but I know that there are families that don’t have that.”

Fort Hood has opened warming stations and other resources to offer aid, some military families on the base are banding together to help one another get through the storm.

Leighann Morris, an Army spouse at Fort Hood, said she has taken in neighbors, some of whom she had not previously met.

“It takes a village,” she said. “Not only do you become overwhelmed, but you also factor in having small children. Cleaning water alone, packing items, drying your stuff and entertaining the kids. Sometimes you can’t do it all.”

At Kirtland Air Force Base in Albuquerque, N.M., Megan Wells, a Marine Corps spouse with a 6-month-old baby, had pipes burst in her home that flooded her garage and several rooms, including her bedroom. Her husband, a sergeant at training to commission as an officer, is away and she can’t contact him. Wells has been on her own.

“I went downstairs because it sounded like [water] was in the wall. I opened the garage and a waterfall was coming down. As I got back upstairs, a pipe burst and started shooting into the master bedroom,” she said.

About 49 homes at Kirtland had pipes break this week and five still needed repair Wednesday, base officials said. It snowed again in the area Wednesday, but conditions have improved enough that the base is open.

Wells said Hunt Military Communities, the private company that manages the housing on the base, told her that her home was habitable, despite 15 industrial fans running around the clock to dry the walls and carpet. After speaking with the Air Force housing personnel on base Wednesday, she was able to get financial support to move while the house is repaired.

“I was super patient the first 24 hours because I knew [the weather] impacted a lot of people. The second day I was frustrated that no one had gotten back to me. [Then] I was just livid,” Wells said. “We live on base because when our husbands are gone we are taken care of and that’s not at all what’s happening right now.”

Hunt said they are working with the base leadership to address situations caused by the storm. Three families have chosen to move after pipes broke in their homes.

“One family has already returned to their home and we continue to work to restore full functionality to the utilities for the homes affected. National disaster companies and local vendors are on-site conducting any needed repairs,” Hunt said. “The storm has also affected operations at installations across the southeast. We are working with local resources to assist families who are experiencing difficulties as a result of the storm.”

Officials at Joint Base San Antonio, Texas, which has been closed since Friday, said they can’t know the scope of the problems there until pipes begin to thaw, said Angelina Casarez, spokeswoman for the base.

More snow is predicted to fall in San Antonio on Thursday and about 10% of residents at Lackland Air Force Base reported power outages, Casarez said. Many portions of the state are in a similar situation.

About 7 million Texans are under a boil water notice and another 560,000 homes and businesses lack power, The AP reported.

Fire stations have opened their doors to allow service members and their families to come in for water and portable toilets have been placed throughout the base.

“We understand and acknowledge the many concerns of the community and are continuously working to ensure the safety and well-being of Team JBSA. We appreciate the flexibility, determination, and cooperation of our team members and are asking our mission partners and installation leads to keep an open line of communication with their personnel on- and off-base in order to find a best way-forward for any issues,” Casarez said.

Texas Gov. Greg Abbott mobilized more than 300 service members Wednesday in the Houston, San Antonio and Dallas-Fort Worth areas to help at warming stations supporting those without power and water.

About 100 troops also are assisting the Texas Department of Public Safety in the Austin, Waco, Amarillo, Abilene, Wichita Falls, Tyler and Dallas-Fort Worth areas. These teams include personnel and equipment that can handle hazardous road conditions, provide recovery of stranded motorists and transport personnel to safety, according to the Texas Military Department.