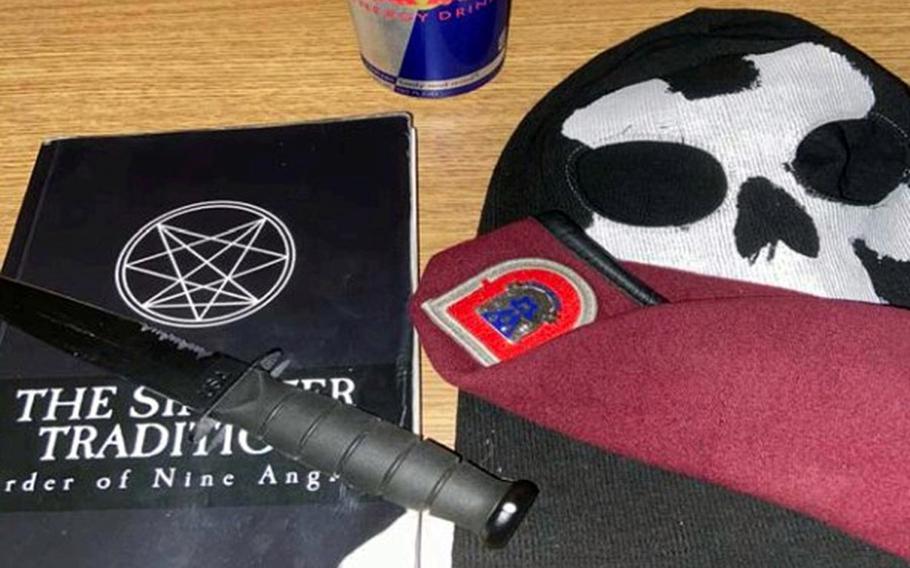 This photo seized from an iCloud account belonging to Army Pvt. Ethan Melzer by the Justice Department displays personal effects, including paraphernalia associated with the extremist group Order of the Nine Angles. Melzer is seeking to have federal charges based on him conspiring with extremist groups to ambush his unit dismissed. (Department of Justice)

This photo seized from an iCloud account belonging to Army Pvt. Ethan Melzer by the Justice Department displays personal effects, including paraphernalia associated with the extremist group Order of the Nine Angles. Melzer is seeking to have federal charges based on him conspiring with extremist groups to ambush his unit dismissed. (Department of Justice) 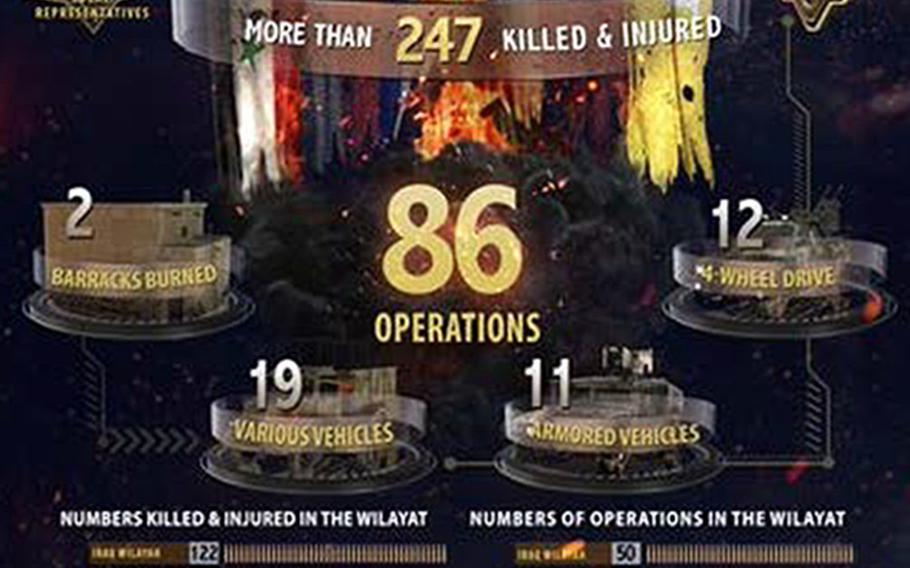 This photo included in the Justice Department's complaint against Army Pvt. Ethan Melzer shows Islamic State propaganda. Melzer pleaded not guilty on July 6, 2020, to charges he conspired with extremist groups to plot an ambush on his unit during a planned deployment to Turkey. (Justice Department)

A soldier indicted on federal charges of conspiring with neo-Nazis to ambush his own unit wants his case dismissed because the grand jury didn’t include enough Black and Hispanic members.

Pvt. Ethan Melzer’s attorneys say the lack of diversity in the jury pool violated their client’s rights to an impartial jury and due process. But prosecutors say they adhered to the Constitution and federal law.

The two sides met Monday with U.S. District Judge Gregory H. Woods over the phone to discuss the case and set deadlines for upcoming motions, pending a decision on the defense motion to dismiss, which was filed in November.

Melzer, 22, was arrested last spring in Italy, where he served with the 173rd Airborne Brigade, and pleaded not guilty in September to eight charges, including conspiracy to kill U.S. nationals, and conspiring and attempting to murder U.S. service members, as well as providing support to terrorists.

Prosecutors accused him of using an encrypted app to send sensitive details about his unit’s locations, movements and security to members of the extremist groups Order of the Nine Angles, or O9A, and the neo-Nazi “RapeWaffen Division.” They say he sought to plot an ambush on his unit during a planned deployment to Turkey.

The grand jury that indicted him was drawn from the northern part of the Southern District of New York and convened in White Plains, though the case is being tried in a Manhattan federal courthouse in the district’s south, where there’s a larger Black and Hispanic population.

Melzer’s attorneys say prosecutors violated his rights under the fifth and sixth amendments, and a 1968 federal law, when they sought the indictment in the less diverse community.

“Allowing a defendant to be indicted in one division and tried in another opens the door to prosecutorial gamesmanship where the government can forum shop for the racial, gender and economic demographics of their choice,” the attorneys wrote.

But in an opposing motion filed in late December, prosecutors said they sought and obtained indictments in June and August from one of the few available federal grand juries in the district as the pandemic forced suspension of other grand juries throughout the country.

“Most of the defendant’s claims to the contrary rest on a faulty premise: That a defendant who is likely to be tried in the Manhattan courthouse must be indicted by a grand jury sitting in that same courthouse,” the federal prosecutors wrote. “That is not the law.”

They argued that the defense’s analysis of demographics relies on an “apples-to-oranges comparison” of the minority makeup of the jury pool and the communities, and that any minority underrepresentation in the jury selection process is the result of what courts have found to be outside factors, not prohibited systematic exclusion.

In a reply filed last month, Melzer’s attorneys disputed the government’s claim that the pandemic limited them from using a Manhattan jury and argued that the government’s choice to “needlessly” seek the indictment in White Plains should count as systematic exclusion.

The judge has yet to issue a decision on the motion on Melzer’s case, said defense attorney Jennifer Willis, who works for a nonprofit that defends poor people charged with federal crimes.

The court on Monday gave the defense about three months to review the evidence the government has provided for its case, which Assistant U.S. Attorney Sam Adelsberg described as “fairly voluminous,” including classified documents and other materials.