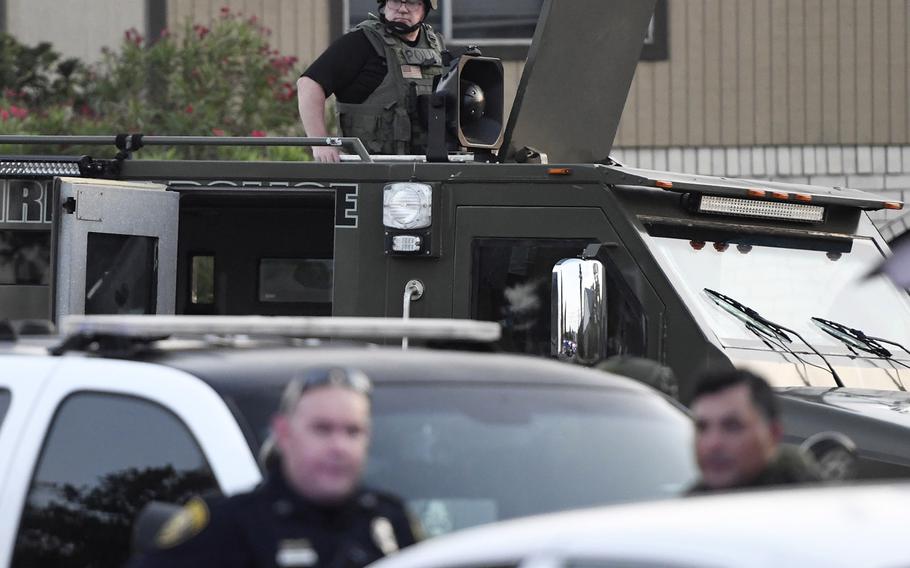 Corpus Christi police SWAT and FBI agents surround a home near Saratoga Boulevard, Thursday, May 21, 2020, in Corpus Christi, Texas. Lt. Michael Pena, spokesperson for the police department, could not confirm if it was related to the shooting at Naval Air Station-Corpus Christi on Thursday morning. (Annie Rice, Corpus Christi Caller-Times via AP)

WASHINGTON — FBI investigators have discovered social media posts that support extremist views that they believe were made by Adam Salim Alsahli, the gunman who shot a sailor as he attempted to gain access to Naval Air Station Corpus Christi.

The online posts show support for groups such as al-Qaida in the Arabian Peninsula, according to two officials familiar with the investigation who spoke to The Associated Press on condition of anonymity. The officials were not authorized to discuss the investigation publicly.

Officially, the FBI has only identified 20-year-old Alsahli as the gunman in the shooting Thursday at the Texas base. On Friday, Defense Secretary Mark Esper said the Pentagon is looking at additional measures to prevent “foreign-inspired terrorists” from accessing military installations.

The incident at NAS Corpus Christi was the third active-shooter incident at a naval facility in five months and the second that the FBI has determined is related to terrorism. On Dec. 6, a Saudi Air Force officer, Mohammed Saeed Alshamrani, shot and killed three sailors and injured eight others at Naval Air Station Pensacola, Fla. On Monday, the FBI announced Alshamrani was in communication with al-Qaida prior to the attack.

“I am very concerned about both cases,” Esper said Friday during a television interview on NBC’s Today show. “We’re looking at additional measures we will take to ensure that foreign-inspired terrorists do not have access” to military installations and the country. However, the defense secretary did not provide details about what those measures could be.

The FBI is leading the investigation into the shooting at NAS Corpus Christi and hopefully there will be more information in the coming days about what happened and what motivated the gunman, Esper said, adding Alsahli appears to have no affiliation with the Defense Department.

The FBI said Thursday that a second person of interest in the shooting could be at large in the community. But FBI agent Leah Greeves provided few additional details during the news conference, including how they determined the incident is terrorism related.

Alsahli is from Corpus Christi, according to three officials familiar with the investigation who were not authorized to speak publicly and spoke to The Associated Press on condition of anonymity.

At about 6:15 a.m. Thursday, Alsahli tried to speed through a base security gate, opening fire and wounding the sailor, a member of base security, U.S. officials told the AP. But she was able to roll over and hit the switch that raised a barrier, preventing him from getting onto the base, the officials said.

Other security personnel shot and killed Alsahli. The sailor sustained minor injuries and she was treated and released from a local hospital Thursday, said Steve Strickland, a spokesman with Navy Region Southeast.

Esper said Friday that the sailor is doing well.

After the shooting at NAS Pensacola, the Defense Department took measures to prevent future attacks such as more thorough background vetting of people coming to train in the country, limited installation access, and updating the weapons policies, he said.

Alshamrani was a Saudi military student participating in pilot training at the Pensacola base. NAS Corpus Christi also has a pilot training and the Chief of Naval Air Training is headquartered there, overseeing training operations from Texas to Florida, according to the base website.

“We continuously evaluate security measures at our installations and facilities to identify new ways to protect our people. We don’t talk about specific security measures to prevent giving potential adversaries insight into our defenses,” a Defense Department spokesman said Friday.