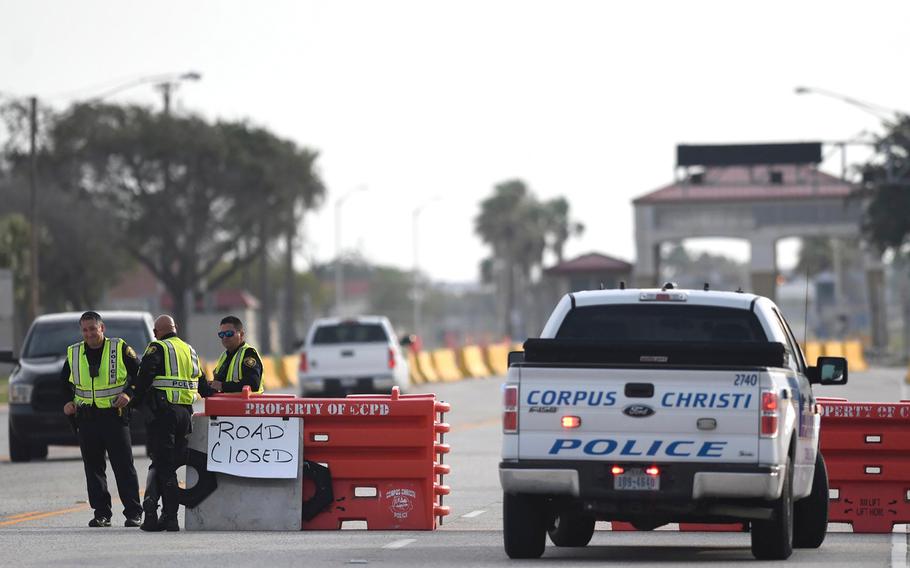 WASHINGTON — The shooting at Naval Air Station Corpus Christi on Thursday that left the gunman dead, a sailor injured and a second person of interest at large is being investigated as “terrorism related,” the FBI said.

“We are working diligently with our state, local, and federal partners on this investigation, which is fluid and evolving,” FBI agent Leah Greeves said during a news conference. “We may have a potential second related person of interest at large in the community. But we would encourage the public to remain calm.”

Greeves provided few additional details during the news conference but confirmed the gunman was dead. The FBI said they would not release information about the suspect at this time due to the ongoing investigation.

However, the suspect was identified as Adam Alsahli of Corpus Christi, according to three officials familiar with the investigation who were not authorized to speak publicly and spoke to The Associated Press on condition of anonymity.

The incident locked down the Texas base for more than five hours, with a report of an active shooter at the base at about 6:15 a.m., the Navy said.

The gunman tried to speed through a base security gate, opening fire and wounding the sailor, a member of base security, U.S. officials told the AP. But she was able to roll over and hit the switch that raised a barrier, preventing the man from getting onto the base, the officials said.

Other security personnel shot and killed the man. The sailor sustained minor injuries and she was treated and released from a local hospital Thursday, said Steve Strickland, a spokesman with Navy Region Southeast

An early morning post on the base’s Facebook page about the incident stated the shooter was in the vicinity of the north gate. Local station Kiii 3 News posted a video of the shooting from a witness who appeared to be waiting in a line of cars near the gate. Multiple gun shots can be heard throughout the minute-long video.

The base lifted the lockdown at about 11:38 a.m. and normal traffic resumed at the main gate, according to a post on the base’s Facebook page. The north gate remains closed to all traffic and the scene is still being processed, Greeves said.

Naval Air Station Corpus Christi conducts pilot training, according to the base website.

The base had a similar lockdown in December when a man rammed his truck into a barricade, according to The Associated Press. He has pleaded guilty to destruction of U.S. government property and possession of a stolen firearm.

This is the third active-shooter incident at a naval base in five months. On Dec. 4, a junior enlisted sailor, Gabriel Antonio Romero, 22, shot three civilians at Joint Base Pearl Harbor-Hickam, Hawaii, killing two of them before killing himself.

Just days later on Dec. 6, a Saudi Air Force officer, Mohammed Saeed Alshamrani, shot and killed three sailors and injured eight others at Naval Air Station Pensacola, Fla. On Monday, the FBI announced Alshamrani was in communication with al-Qaida prior to the attack based on data found on his cellphone.