Seventeen teams of troops organized to support vaccine efforts throughout US 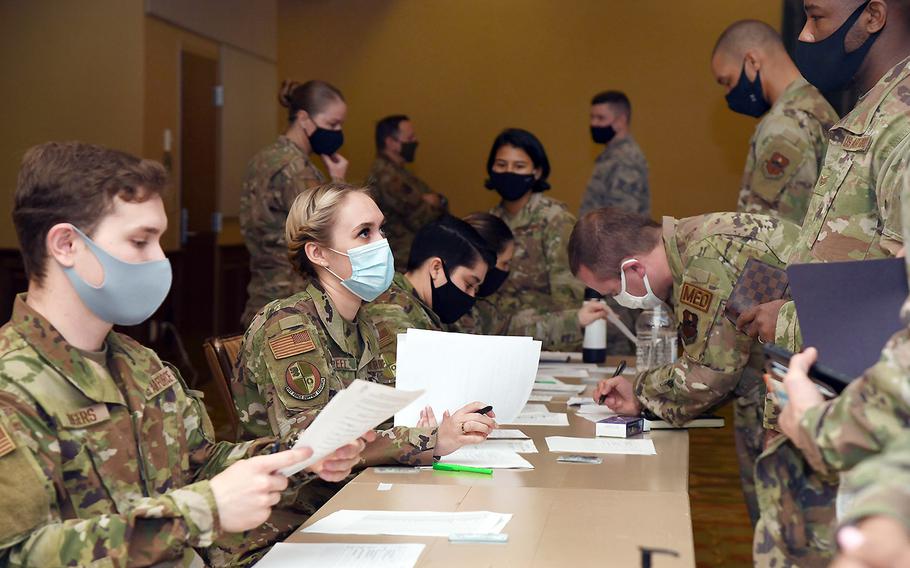 WASHINGTON — The military’s support of coronavirus vaccination efforts across the United States has grown to 17 teams with medical personnel and support staff, the Pentagon announced Monday.

These teams include personnel who administer vaccinations, clinical staff, nurses, command-and-control service members, and troops who conduct other work that is needed at the sites.

As of Monday, 17 teams are deployed, scheduled to deploy, or en route to support eight states and a territory, the Pentagon said. Four states and one territory have 1,100 troops in 10 teams that are now deployed: California has one team of 222 soldiers; New Jersey has 75 soldiers and sailors from three teams; Texas has 500 soldiers, airmen and Marines from three teams; New York has 278 sailors and airmen in two teams; and the U.S. Virgin Islands has one team with 25 soldiers and sailors.

The four small teams in New Jersey and the U.S. Virgin Islands are not part of the 100 FEMA centers effort, but are helping local vaccination and pandemic support efforts, according to Mitchell. These teams can provide 250 shots per day.

Vaccination centers in Pennsylvania, Florida, Illinois, and North Carolina have been selected to receive military vaccination teams, but the Pentagon is still determining which personnel will deploy, John Kirby, the chief Pentagon spokesman, said Monday during a news briefing. Those four states are expected to have 1,139 personnel deployed in seven teams.

The Pentagon said it could deploy another 75 teams if conditions warrant it.

As of Monday, the Defense Department’s vaccination efforts for the military have administered 1,144,697 doses out of a total of 1,275,925 doses that the department has received, Kirby said. Of those, 735,000 are first doses and 409,000 are second doses. The military is vaccinating primarily people who are front-line workers, such as health care professionals and police, and service members about to deploy.