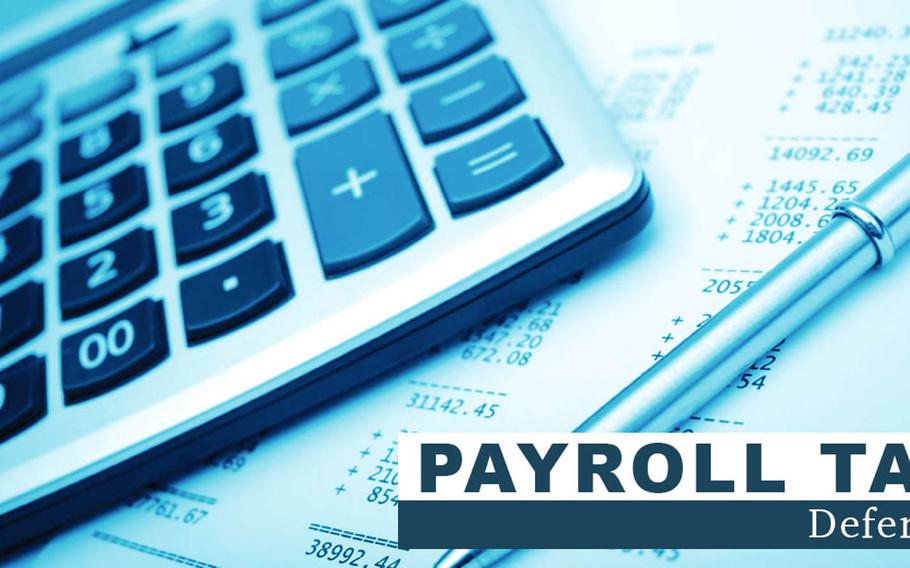 Service members and federal employees have been given until Dec. 31, 2021, to repay Social Security taxes that weren't collected over the last four months of 2020, the Defense Finance and Accounting Service says. Initially, the repayments were supposed to be made over four months, which would have put a large dent in many monthly paychecks. (U.S. Air Force graphic)

KAISERSLAUTERN, Germany — Members of the armed forces and federal employees have 12 months instead of four to pay back Social Security taxes that haven't been collected since September, officials said this week.

The so-called payroll tax deferral, which was put in place by the Trump administration for the last four months of 2020 to help workers during the coronavirus pandemic, meant that many working Americans — including service members and federal employees — had an extra 6.2% of money in each paycheck.

But starting with the first pay period of 2021, the extra money has to be paid back. And, on top of that, Social Security taxes will be collected again.

Initially, the money was supposed to be repaid by April 30 in equal amounts, which would have meant a dip in paychecks of 12.4%.

But this week, the Defense Finance and Accounting Service announced the period to collect the deferred tax has been extended until Dec. 31, 2021, meaning the money will be deducted in even amounts over 26 pay periods instead of eight.

The extended period for paying back the money means some troops and civilians could see smaller paychecks in 2021 — but not as small as they would have been if they'd had to pay back the money over four months.

The deferral affected civilians who made $4,000 or less per pay period and military members who cleared $8,666 or less of basic pay per month.

Many private sector employers chose not to be a part of the deferral, which they saw as kicking the can down the road. But participation was mandatory for federal government employees and service members including enlisted personnel, service academy cadets, second lieutenants and majors, most warrant officers and some lieutenant colonels and colonels.

An E5 with eight years of service and monthly basic pay of $3,306.30, for instance, will once again have $204.99 deducted from his or her paycheck starting next month, and an additional $68.33 will be taken out to start paying back the deferred amounts.

If the repayments had been spread over four months, the member would have seen his or her paycheck shrink by more than $400 a month.

When the deferral was announced, military leaders advised troops to budget so that they wouldn't be caught short when they face the double whammy of having to pay back the deferred taxes at the same time as the 6.2% Social Security taxes were collected again. Financial education classes have also been made available in some locations..

The repayment extension was included in the $2.3 trillion government funding and COVID-19 relief bill passed by Congress and signed into law Sunday by President Donald Trump.