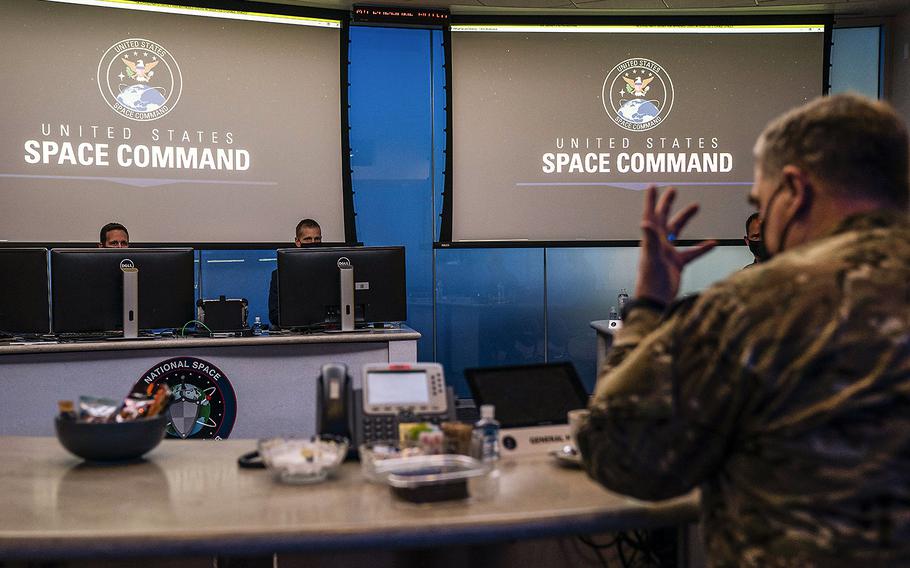 WASHINGTON — Lawmakers on the Senate Intelligence Committee are urging President Joe Biden to review a decision to move U.S. Space Command from Colorado to Alabama, amid a new line of concern that intelligence missions could take a hit.

“We are concerned this decision did not take into account how such a move may affect intelligence community dependencies and missions,” committee Chairman Mark Warner, D-Va., and Sen. Michael Bennet, D-Colo., wrote to Biden in a letter dated May 11.

The letter is the latest salvo against the decision by former President Donald Trump to move the Space Command to Redstone Arsenal, an Army post in Alabama. Shortly after the Air Force announced its selection in January, lawmakers from Colorado, among others from neighboring states, said the decision was influenced by politics.

Some members of Congress have contended Trump pushed former Air Force Secretary Barbara Barrett to recommend Space Command be relocated to Alabama to woo his political allies in the state.

Senators in their letter Tuesday wrote the intelligence committee has worked to boost collaboration in space operations between the intelligence community and the Defense Department, especially by investing in new infrastructure in Colorado, such as the National Space Defense Center, the lawmakers argued.

The National Space Defense Center became a fully operational command center at Schriever Air Force Base in Colorado in early 2018 to pool military and intelligence community resources to defend against potential threats to U.S. space systems. The intelligence community is a group of 18 national security-related government agencies, nine of which are part of the Defense Department.

The possible effects on “operational integration between the intelligence community space communities at NSDC and at other joint sites in Colorado” must be taken into account, the senators wrote.

The Space Command has been housed temporarily at Peterson Air Force Base in Colorado since it was established in August 2019 to oversee and control the U.S. military’s space-based infrastructure and operations.

The lawmakers want Biden to review “the parameters and method by which this decision was evaluated” also to ensure “we are... taking advantage of the current colocation of these communities and pools of expertise, and spending resources in a manner that effectively meets the accelerating pace of threats to our overhead space capabilities.”

The Defense Department’s inspector general launched a probe into the basis for selecting Alabama in February after Rep. Doug Lamborn, R-Colo., requested the investigation. Bennet applauded the move in a joint statement at the time with Sen. John Hickenlooper, D-Colo.

The Government Accountability Office, a nonpartisan watchdog group, said in March that they would also launch a review into the methodology and scoring of the Air Force’s decision-making process.

Last week, acting Air Force Secretary John Roth said at a House hearing on the Air Force and Space Force budget that the Defense Department could finish its investigation as soon as the fall, and the GAO “will probably take a bit longer.”

The Air Force is conducting a legally required environmental review that will conclude sometime in 2022. The final decision will be made on the command’s location depending on the results, Roth said.

The senators in their letter Tuesday wrote “workforce disruption” must also be considered in a review “given the many defense and intelligence civilian employees and contractors working on space programs in Colorado at the highest levels of classification.

The future headquarters will have about 1,400 military and civilian personnel. Colorado has a robust aerospace economy, with nine top aerospace contractors employing thousands in the state.

“Space is a critical national security issue, and we cannot squander time, talent, or money on unnecessary expenditures or delays,” the senators wrote.

Redstone Arsenal was named one of six finalists for the headquarters in November after the Air Force conducted two searches for a permanent home for the Pentagon’s newest combatant command. Peterson AFB was seen as the front-runner to be named the permanent home for Space Command.