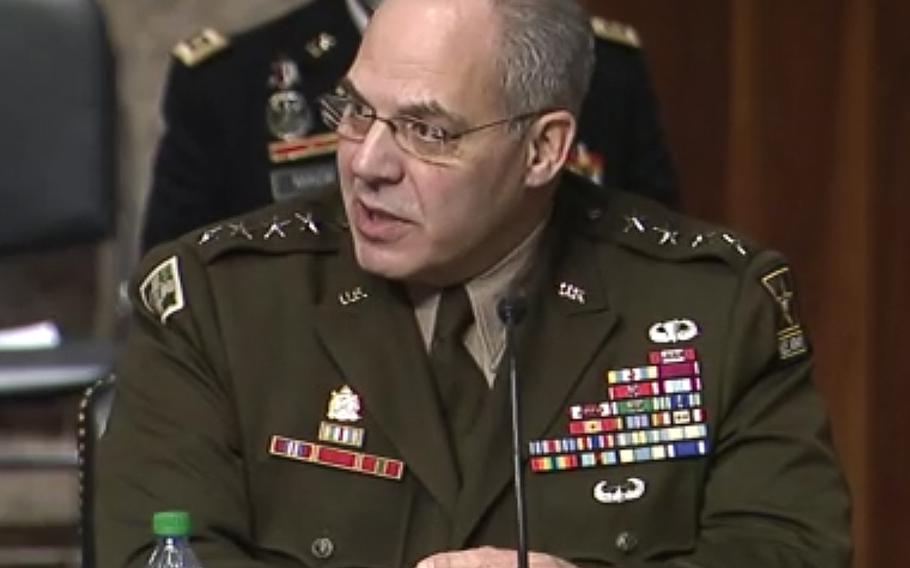 Roughly 60% of military health care workers have now received the coronavirus vaccine, Pentagon officials told members of the Senate Armed Services Committee on Thursday. However, they said more educational efforts are needed to encourage the rest of the force to accept the vaccination.

“We’ve only been at this for about 60 days, but [locations] where we’ve seen vaccine rates at lower acceptance rates, the commands are getting involved, providing education forums, having town halls and those type of things to provide that insight,” Robert G. Salesses, acting assistant secretary of defense for homeland defense and global security, said during a hearing about the Defense Department’s support of combating the pandemic.

The comments Thursday by Salesses followed testimony last week by Air Force Maj. Gen. Jeff Taliaferro, vice director of operations for the Joint Chiefs of Staff, who told the House Armed Services Committee that about one-third of all U.S. service members had turned down inoculation when offered it.

Yet Salesses offered little information about the next tier of Defense Department personnel eligible for the vaccine, which includes service members who are part of national security capabilities such as strategic and nuclear deterrents and homeland defense, as well as those preparing for overseas deployments.

Sen. James Inhofe of Oklahoma, the ranking Republican on the committee, said he’s seen data that shows about one-third of service members are opting out of getting the vaccine.

“I have a hard time understanding why it’s true, but so many people are reluctant to use the vaccine,” Inhofe said.

Though the Pentagon is not releasing publicly its data of vaccine distribution at specific locations, it is tracking it and working to improve areas with lower acceptance rates, said Salesses, who testified alongside Stacy A. Cummings, acting undersecretary of defense for acquisition and sustainment, and Gen. Gustave Perna, chief operating officer for Operation Warp Speed, the federal government’s effort to create and distribute the vaccine.

Because the vaccine is approved as an “emergency use,” the Defense Department cannot require service members take it, he said when questioned by senators on why it can’t be made mandatory.

Salesses also said some people who declined the vaccine might have done so because they received it elsewhere. As of now, the Defense Department system tracks who has taken it and what tier they fall into.

Sen. Richard Blumenthal, D-Conn., requested that information be provided to the Senate.

“I would like to know how many and in what category have actually received the vaccine and I understand that you are working through the essential workers [and] forces. I’d like to know who that is, how many have actually received the vaccine and what the next tiers are. I would think it should be made available to all men and women in uniform,” Blumenthal said. “It will be, but why is it not already?”

The Defense Department does share an overview of its vaccine data with the Centers for Disease Control and Prevention, which is presented on the CDC website. As of Thursday, nearly 1.3 million doses had been delivered to the Defense Department and more than 887,000 have been administered, according to the CDC. Of those, 626,701 have received more than one dose.

Sens. Josh Hawley, R-Mo., and Gary Peters, D-Mich., urged the Defense Department release the data on vaccination rates at the installation level so that communities can be informed.

This is of particular interest because a recent survey from Blue Star families, a military family-focused nonprofit, found only about 33% of military families said they are willing to take the vaccine when it’s their turn, Peters said.

“That’s a real problem and I’m really worried about communities that host defense facilities. A community could be doing a great job getting 80% of folks vaccinated in their community and yet folks on the military base in their community is at 33%. That’s unacceptable,” he said. “The community has to know what’s happening at that base with all of those people there.”

Leadership at all levels continue to encourage taking the vaccine and those efforts will “improve upon that number,” Salesses answered.

Defense Secretary Lloyd Austin released a video Wednesday encouraging service members to read up on the vaccine through the websites of the Defense Department and CDC. As the vaccine approaches available for all troops who want it, he said he wants them to have what they need to make an informed decision.

“And when you do, you’ll see that these vaccines have undergone intensive safety monitoring. You’ll see that they are safe and they are effective. And you’ll see that millions of your fellow citizens have already taken them with little to no side effects,” Austin said. “I’ve taken it myself. After talking with my doctor, I believed it was the right thing to do -- not only for my health -- but also for my ability to do the job and to contribute to our readiness.”

Sen. Tom Cotton, R-Ark., echoed Inhofe’s worries and asked for the opinion of Perna, who has spent more than 30 years in the Army.

“You still wear the uniform, you’ve had a long career of serving with soldiers and leading soldiers,” Cotton said. “Can you give us thoughts on why that is and what we can do to make sure all of our service members are getting vaccinated as soon as the vaccine is available to them?”

“Senator, I think I would reassure my teammates, the soldiers, sailors, airmen, Marines, and Coast Guardsmen that serve, we have greatest scientists in the world that worked on these vaccines,” Perna said. “I have 100% confidence in the vaccine. I said so to my own parents.”