Senate passes defense bill without funding for Stars and Stripes 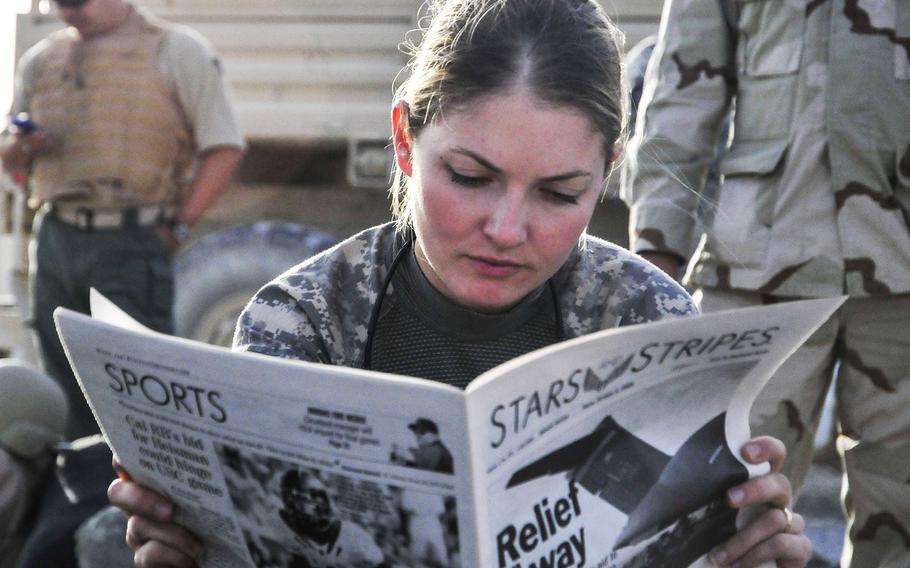 First Lt. Tracy Tyson from Seattle, Wash., assigned to the 5th Brigade 2nd Infantry Division, reads Stars and Stripes at Kandahar Airfield, Afghanistan, while waiting for a flight to Forward Observation Base Wolverine in 2009. (U.S. Navy)

WASHINGTON — Funding for Stars and Stripes was not included in the Senate’s version of the 2021 National Defense Authorization Act passed Thursday, setting up deliberations with House members about the future of the news organization.

The Senate’s version of the NDAA, which passed 86-14, contains no language reversing the Pentagon’s February request to strip the roughly $15.5 million annual subsidy that the editorially independent news organization receives.

The Senate’s $740.5 billion version of the NDAA, which sets annual Pentagon spending and policy priorities, was passed just two days after the House approved its version of the NDAA for the same amount by a vote of 295 to 125. The Senate bill left that chamber’s Armed Services Committee without restoring funding for Stars and Stripes and no amendments regarding the news organization were added to the bill when it came up for a vote Thursday on the Senate floor.

The $15.5 million in funds account for about half of Stars and Stripes’ annual spending. The news organization receives about $8.7 million annually in operations and maintenance funds and about $6.9 million in contingency operations funds to support news reporting throughout the world. The remainder of its funding comes from sales, subscriptions and advertising. The $15.5 million is the same amount that Stars and Stripes received for fiscal year 2020.

The House and Senate each approve authorization bills that specify the amount of money that can be spent on a program. The Appropriations Committees also approve bills in each chamber that allows the money to be made available from the treasury for a program that have been authorized.

The conference committee decides on the final version of the National Defense Authorization Act and consults with the Appropriations Committees on funding amounts. If the Appropriations Committees provide money for a program such as Stars and Stripes in its final legislation, the money can be spent, according to a Senate staffer, even if the program’s funding is not in the final authorization bill.

Lawmakers have said they do not expect the NDAA to be finalized ahead of the new fiscal year on Oct. 1.

The Pentagon moved to strip funding for Stripes after Defense Secretary Mark Esper ordered a defense-wide review of spending practices in an effort to reallocate funds to prepare the military to fight a major near-peer rival, such as China or Russia. Esper defended the funding cut for the newspaper in February, telling reporters that the money would go to “higher-priority issues.”

Though Stars and Stripes is part of the Pentagon’s Defense Media Activity, the news organization retains its editorial independence and is congressionally mandated to be governed by First Amendment principles.

Stars and Stripes first appeared during the Civil War, and it has been continuously published since World War II. The news organization produces daily newspapers and the news website stripes.com, which is updated with news 24 hours a day, seven days a week. It uses its annual stipend largely to print and distribute newspapers to American troops around the globe and fund reporting efforts in conflict zones such as Afghanistan, Iraq and Syria.