Senate confirms Hicks as first woman to serve as Pentagon’s No. 2 civilian 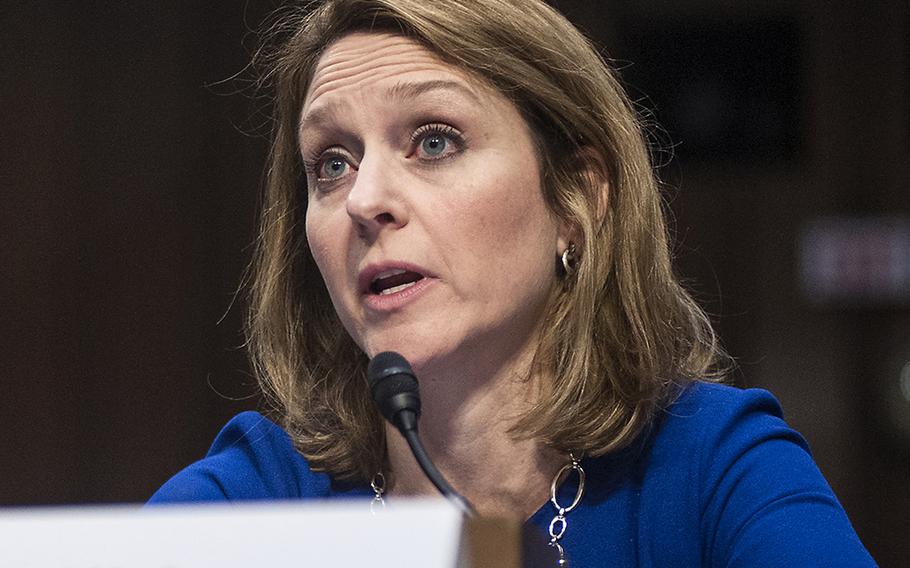 Buy Photo
In a Jan. 10, 2017 photo, Kathleen Hicks, then director of the International Security Program at the Center for Strategic & International Studies, testifies at a Senate Armed Services Committee hearing. (Carlos Bongioanni/Stars and Stripes)

WASHINGTON — Kathleen Hicks will become the first woman to serve as the Pentagon’s No. 2 ranking civilian after the Senate confirmed her late Monday as deputy defense secretary.

Hicks is a longtime Washington national security expert and former Defense Department official who recently led President Joe Biden’s Pentagon transition team. She was confirmed by voice vote and expected to be sworn into her new job early Tuesday afternoon, the Pentagon announced.

Typically, deputy defense secretaries have been responsible for running the Defense Department’s day-to-day business and management operations. But Hicks could take a higher profile role as Defense Secretary Lloyd Austin’s No. 2.

Austin, a retired four-star general who required a waiver of law to serve in the top Pentagon job, told lawmakers last month that he would rely heavily on Hicks’ civilian experiences as he guided the Pentagon and military. He promised she would have considerable say in policy decisions.

“If confirmed, I will assist [Defense] Secretary Austin in bringing enduring, consistent focus to total force health and quality,” Hicks said Feb. 2 during her confirmation hearing. “We must root out violent extremism, systemic racism, sexual assault and harassment, and other inhibitors to readiness.”

In a tweet Tuesday morning, Austin welcomed Hicks to the Pentagon.

“I couldn't be more pleased to welcome Dr. Kathleen Hicks as the 35th Deputy Secretary of Defense, and I'm especially proud to be working with the first woman to fill the role,” he wrote.

Hicks served as a career official in the Pentagon for about a decade, beginning as an intern in 1993. She became a senior defense official during former President Barack Obama's administration, serving as the deputy undersecretary of defense for strategy, plans and forces from 2009 to 2012. She was promoted in 2012 to principal deputy undersecretary of defense for policy, a job that she served in for about one year. More recently, she has worked as a senior adviser and national security expert at the Center for Strategic and International Studies think tank in Washington.

“She is a highly regarded defense policy expert who has served in multiple administrations with integrity and distinction,” Senate Armed Services Committee Chairman Jack Reed, D-R.I., said in a statement. “She is a true professional. I am pleased she will join Secretary Austin in leading the Department of Defense forward, defending our nation, and upholding our values.”

Like Austin, Hicks listed the coronavirus pandemic as the Pentagon’s top domestic issue during her confirmation hearing. She was set to meet with the defense secretary Tuesday afternoon for an update on pandemic-related issues, according to a DOD statement.

She also agreed with her new boss that checking China’s increased military power and global influence efforts presented the Pentagon with its largest international problem. Hicks told lawmakers the United States must commit to ensuring its troops were trained and provided top-of-the-line weaponry to deter potential aggression from China and other adversaries, such as Russia, Iran and North Korea.

"Armed conflict between the United States and China is not desirable, and it is not inevitable," she told the Senate Armed Services Committee. "The U.S. military plays a critical role in preventing that outcome. Even as we stand ready today, we must modernize our concepts, capabilities, workforce and budget for deterrence to endure.”