A member of a a JPAC recovery team observes wreckage from a B-24 Liberator during excavation operations in Madang Province in Papua New Guinea in this 2008 photo. (John Hageman/U.S. Navy)

A member of a a JPAC recovery team observes wreckage from a B-24 Liberator during excavation operations in Madang Province in Papua New Guinea in this 2008 photo. (John Hageman/U.S. Navy) 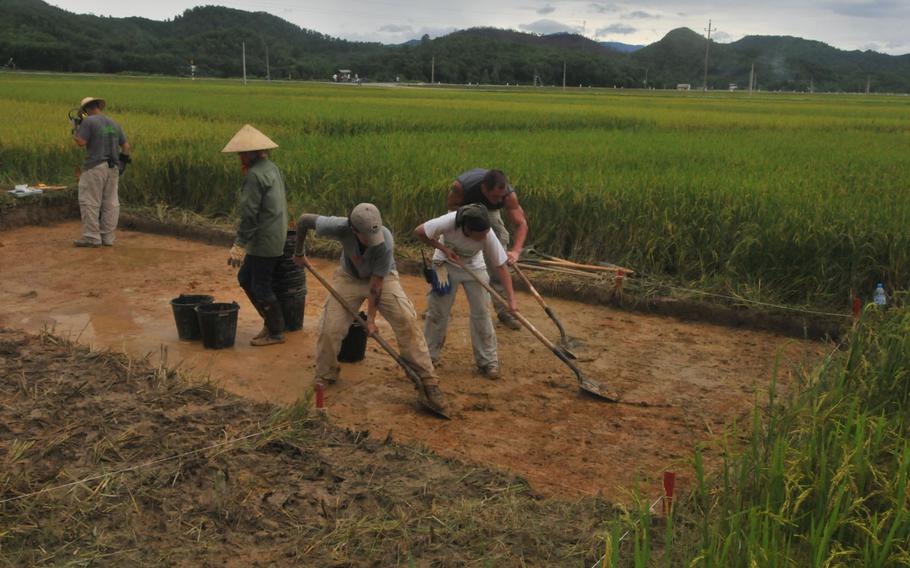 Recovery members from Joint POW/ MIA Accounting Command (JPAC) use shovels to collect dirt to be screened for possible remains at an excavation site in Ha Tinh province, Socialist Republic of Vietnam in this Aug. 2010 photo. (John Hageman/U.S. Navy)

WASHINGTON — A second investigation has found that Pentagon efforts to account for fallen troops missing overseas are inefficient and in need of overhaul, according to congressional sources.

The Government Accountability Office is expected to release the results of its investigation into the Joint POW-MIA Accounting Command in coming weeks, noting that the program is no closer to reaching mandated goals for recovering more lost servicemembers than it was three years ago.

The GAO report comes on the heels of an Associated Press story exposing a 2012 internal JPAC report that found the agency to be “acutely dysfunctional” with some missions that amounted to little more than paid vacations for staffers.

The former head of JPAC disagreed with the findings and squashed the report, according to AP reports.

Congressional sources who have viewed drafts of the GAO report said the effort is plagued with inefficiencies, duplicative efforts and unfulfilled goals.

Three years ago lawmakers mandated JPAC to reach an annual goal of recovering at least 200 fallen troops from overseas battlefields by 2015, but it has failed to build the capacity to do so, the GAO found. Currently the Hawaii-based command averages less than 70 individuals per year.

Much of the inefficiency found by the GAO researchers comes down to a turf war between JPAC and the Defense Prisoner of War/Missing Personnel Office, which shares some of the same responsibilities, Congressional sources said. The GAO will recommend that there be a single chain of command to smooth the process and avoid overlap.

James Miller, the undersecretary of defense for policy, signed off on the GAO report this week, but Pentagon officials have yet to publicly comment on its recommendations. The Pentagon needed an extension to respond to the GAO findings, which was granted on the condition that Defense Secretary Chuck Hagel was briefed on the issue.

Defense Department press secretary George Little said earlier this week that Pentagon officials will be taking a “second look” at the controversial 2012 internal report to determine the report’s veracity.

“We’re going to review the concerns raised in the report to see how JPAC is or isn’t functioning well,” Little said. “And if steps need to be taken to remedy what’s happening inside JPAC, then we’ll take action. This is an important mission.”

Miller will head up that review.

The GAO’s inspector general is expected to meet with Hagel in coming days, with JPAC at the top list for their discussion.

Officials from the House Armed Services Committee said they would consider hearings on the issue in coming months. Rep. Joe Wilson, R-S.C., chairman of the subcommittee overseeing POW/MIA issues, said in a statement that he is "deeply concerned for the thousands of families left with uncertainty."

"Based on recent reports, it is clear that more work needs to be done," he said. "I look forward to receiving the GAO report and reviewing their suggestions to make sure this matter is resolved as quickly as possible."