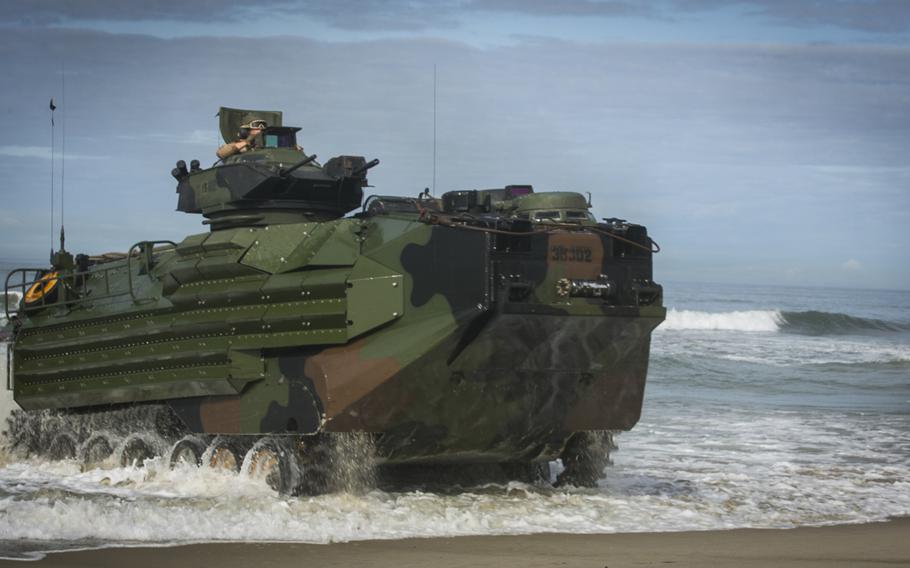 WASHINGTON — An assault amphibious vehicle carrying 15 Marines and a sailor was more than a half-mile from San Clemente Island off the coast of Southern California when it began to sink during a training accident, senior Marine officials said Friday.

“Immediate response was provided by two additional [assault amphibious vehicles] that were with them… as well as the safety boat, which is always accompanying our water operations,” Lt. Gen. Joseph Osterman, the commander of I Marine Expeditionary Force, said during a news briefing at Marine Corps Base Camp Pendleton, Calif.

Yet, one Marine was killed and two were injured in the accident. Five others were rescued, and ships and helicopters continue to search for the remaining seven Marines and a sailor still missing at sea a day later, the senior Marine officials said.

The accident happened Thursday at about 5:45 p.m. local time after the Marines had just finished training on San Clemente Island and were traveling back to their ship. They were more than a half-mile from shore when they noticed the vehicle was taking on water, Osterman said.

The two injured Marines were taken to a local hospital and are in critical condition, according to the Marines. The name of the Marine who died will be withheld for 24 hours, pending notification of next of kin.

All 15 Marines aboard the vehicle were assigned to the 15th Marine Expeditionary Unit, I Marine Expeditionary Force. Assault amphibious vehicles, which are used for storming beaches, weigh about 26 tons and can carry up to 21 people, according to Osterman. The service members were participating in normal waterborne training with the Makin Island Amphibious Ready Group when the accident occurred. The 15th MEU is based at Camp Pendleton.

Search and rescue efforts, supported by the Navy and Coast Guard, are still underway. The assault amphibious vehicle was operating in several hundred feet of water, which is too deep for divers, Osterman said.

“Basically the adjacent assault amphibious vehicles watched it go down and, as I said, 26 tons…the assumption is it went all the way to the bottom,” he said. The Navy and Coast Guard are providing equipment that can go down and look at the vehicle, Osterman said. Gen. David Berger, commandant of the Marine Corps, announced during the news briefing that he had directed the immediate suspension of water operations for all assault amphibious vehicles as a precaution until they determine what caused Thursday’s accident. Berger also said every assault amphibious vehicle in the fleet was going to be inspected. Osterman said the Marines have more than 800 assault amphibious vehicles. The Marines who were aboard the vehicle when it sank were wearing their normal combat gear, which includes body armor, because of the training that they were doing on the island. They were also wearing flotation vests, according to Osterman, and some of the Marines were rescued because they were floating. The USS San Diego and USS Somerset, amphibious transport dock ships that carry assault amphibious vehicles in the well deck, are part of the search. According to images posted online by 15th MEU, Marines from Battalion Landing Team 1/4 embarked onto the ships Saturday to conduct “training to increase Navy-Marine Corps interoperability in the eastern Pacific.”

Assisting in the search for the missing are the USS John Finn, three U.S. Navy MH-60 helicopters, Coast Guard ships and helicopters, and multiple small boats from the USS Makin Island, USS Somerset and USS San Diego. The helicopters have been flying nonstop to assist with the search and rescue effort, according to Osterman.