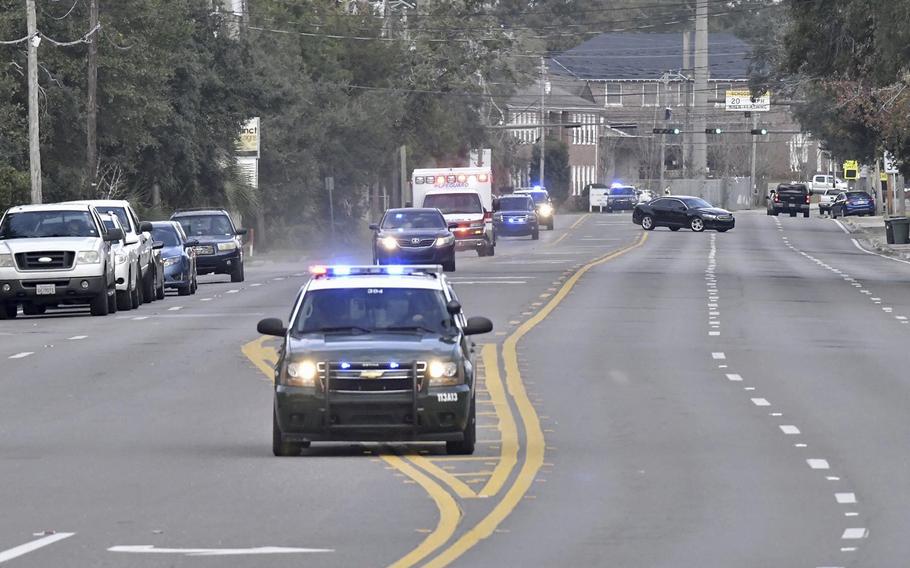 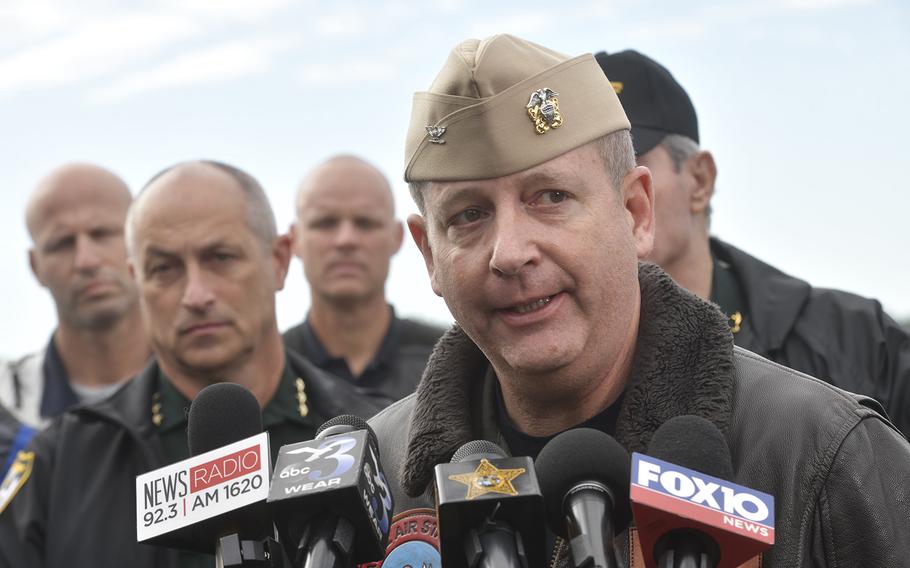 Navy Capt. Tim Kinsella briefs members of the media following a shooting at the Naval Air Station in Pensacola, Fla., Friday, Dec. 6, 2019. A U.S official told The Associated Press that the suspect was a Saudi aviation student, and that authorities are investigating whether the shooting was terrorism-related. (Tony Giberson, Pensacola News Journal/AP)

WASHINGTON — A member of the Saudi Arabian air force opened fire Friday morning in a classroom building at Naval Air Station Pensacola, Fla., killing three and injuring several others, according to local and law enforcement officials.

The gunman, who was shot fatally by an Escambia County sheriff’s deputy, was identified as Mohammed Saeed Alshamrani, a second lieutenant in the Saudi air force, U.S. officials who spoke on condition of anonymity told The Associated Press. The officials said authorities were investigating whether the attack was terrorism-related.

Seven other people were injured in the shooting, including two sheriff’s deputies, said Chief Deputy Chip Simmons of the Escambia County Sheriff’s Office. One deputy was shot in the arm and the other was shot in the knee, and both are expected to survive, he said.

Alshamrani, an aviation student at the Navy base, used a handgun and all of the shooting took place in one classroom, authorities said. Capt. Timothy Kinsella, the commanding officer of NAS Pensacola, noted weapons are not allowed on the base.

“You just don’t expect this to happen at home … But it did and it has,” said Sheriff David Morgan.

“Obviously, the government of Saudi Arabia needs to make things better for these victims. And I think they are going to owe a debt here given that this is one of their individual,” he said Friday afternoon during a news conference.

President Donald Trump tweeted Friday about a call that he had with the king of Saudi Arabia about the shooting.

“King Salman of Saudi Arabia just called to express his sincere condolences and give his sympathies to the families and friends of the warriors who were killed and wounded in the attack that took place in Pensacola, Florida,” Trump wrote. “The King said that the Saudi people are greatly angered by the barbaric actions of the shooter, and that this person in no way shape or form represents the feelings of the Saudi people who love the American people.”

The shooting in Florida follows another deadly shooting Wednesday at Joint Base Pearl Harbor-Hickam in Hawaii, where a 22-year-old junior enlisted sailor shot three civilians, killing two of them, before killing himself.

Acting Navy Secretary Thomas Modly responded Friday to the two shootings, as well as the death last week of Petty Officer 3rd Class Oscar Jesus Temores at Fort Story, Va. Temores was killed in a car crash at the post.

“Our entire Navy and Marine Corps team is struck and deeply saddened by the attacks within our own naval family over the past several days, at Little Creek, Virginia last week, Pearl Harbor, Hawaii on Wednesday, and today in Pensacola, Florida. These acts are crimes against all of us,” Modly said in a statement. “Our prayers are with the families of the fallen and with the wounded. It is our solemn duty to find the causes of such tragic loss and ceaselessly work together to prevent them. Let us make concerted efforts to care for the families of those lost, and those wounded, visibly and not.”

Escambia County Commissioner Jeff Bergosh, who works at the NAS Pensacola as a civilian contractor, told the Pensacola News Journal that he was in line to go through the gate Friday morning when it was shut down due to the active-shooter report.

“There’s probably been 100 or so various law enforcement vehicles zooming down the wrong side on Navy Boulevard,” Bergosh told the newspaper. “There’s been ambulances, fire trucks.”

Lucy Samford, 31, said her husband, a Navy reservist and civilian worker on the base, was about 500 yards from where the shooting happened. She said she got a call from him a little after 7 a.m. and “one of the first things out of his mouth was, ‘I love you. Tell the kids I love them. I just want you to know there’s an active shooter on base.’”

Her husband, whom she declined to identify, later told her he was OK.

The base remained closed Friday until further notice and people still on base would remain there until it was safe to evacuate, Kinsella said.

Naval Air Station Pensacola is located in western Florida near the border with Alabama. The base community has more than 16,000 military and 7,400 civilian personnel, according to its website. The base is home to the Navy’s Blue Angels Flight Demonstration Squadron and the headquarters for Naval Education Training Command. Part of the Pensacola base resembles a college campus, with buildings where 60,000 members of the Navy, the Marines, the Air Force and the Coast Guard receive training each year in multiple fields of aviation.

Information from The Associated Press was used in this report.kenney.caitlin@stripes.com Twitter: @caitlinmkenney