Sailors, Marines ordered to don spiffier uniforms while at Pentagon and other DC sites 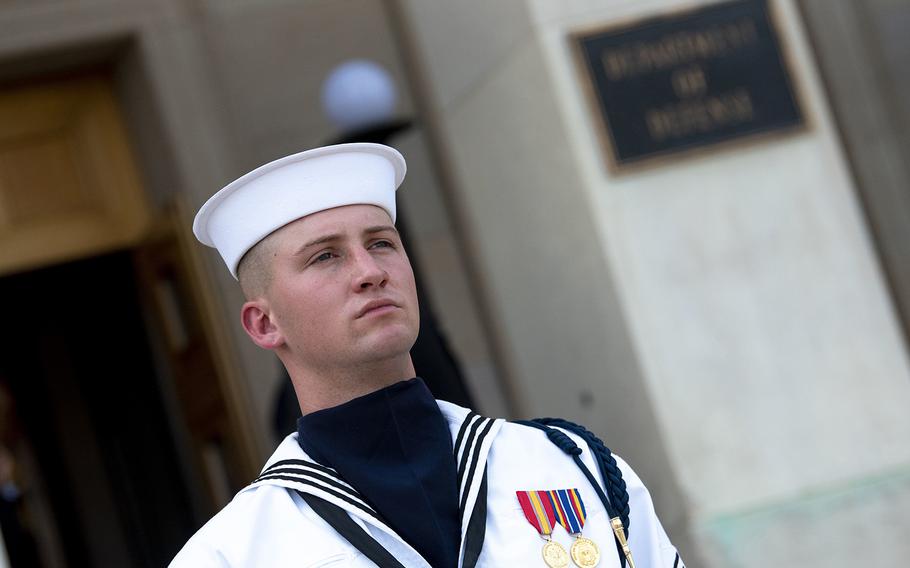 A sailor with the Joint Armed Forces Honor Guard participates in a ceremony at the Pentagon near Washington, D.C., Oct. 2, 2019. (Lisa Ferdinando/Defense Department)

The U.S. Navy and Marine Corps have ordered service members to wear more formal uniforms while at the Pentagon and other sites in the National Capital Region to project a more professional look.

As of July 6, the Navy has restricted sailors from wearing Navy Working Uniform Type III and flight suits inside the Pentagon and Pentagon Library and Conference Hall, the Navy said in a message this month. The greenish-brown Type III uniform is the Navy’s standard working attire.

Sailors may not wear them in the National Mall area that is bounded by Capitol Hill and the surrounding Senate and House Staff offices, the White House and Executive Office building, Department of State and all monuments and memorials, the Navy said.

A Marine Corps directive issued last month required its service members to wear the seasonal “B” or “C” uniforms while at the Pentagon. That uniform consists of olive-green trousers or skirt and a khaki shirt.

“We aligned the Navy-Marine Corps uniform policies in the National Capital Region and the Pentagon Reservation to demonstrate a unified, professional image of our integrated Naval Force,” Ed Zeigler, a spokesman for Naval District Washington, told Military.com.

The district made the change in coordination with Navy and Marine Corps leadership, he said.

Sailors are exempted from the requirement if they are authorized for a Joint Task Force National Capital Region mission, the Navy said. Exemptions are also made for Navy personnel on watch-standing duty in the National Military Command Center, Navy Operations Center and DiLorenzo Tricare Health Clinic.

Sailors wearing the Type III working uniform may stop outside Defense Department bases or installations for emergencies only.

“The NWU Type III may be worn as the alternate uniform of the day per commanding officer or officer-in-charge permission on DoD installations, commands and facilities within the [National Capital Region] other than the restricted areas,” the Navy said.