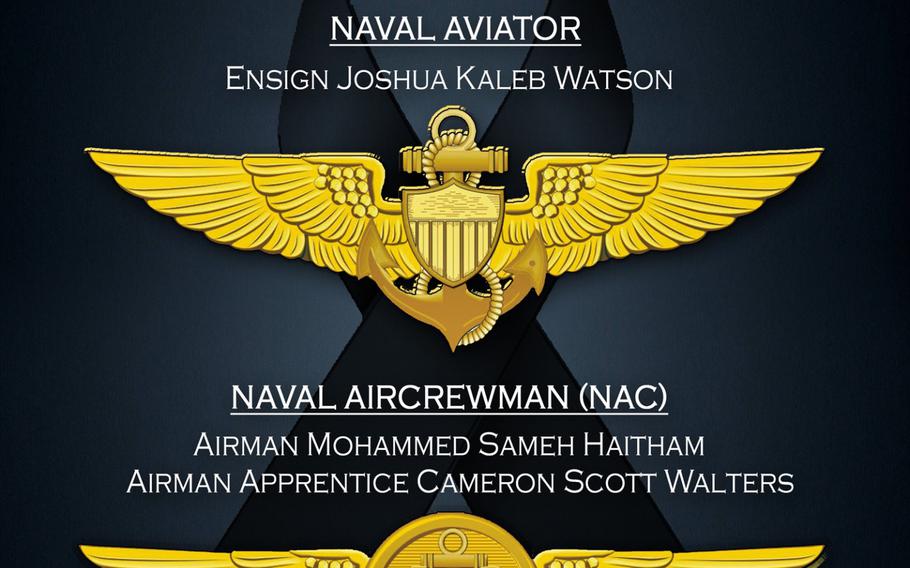 A graphic depiction of the Naval Aviator and Naval Aircrewman pins posthumously awarded, Dec. 10, 2019, by Acting Secretary of the Navy Thomas B. Modly to the victims of the Dec. 6 Naval Air Station Pensacola shooting. (U.S. Navy graphic by Mass Communication Specialist Paul Archer)

WASHINGTON — The three sailors killed Friday during a shooting at Naval Air Station Pensacola in Florida have been posthumously awarded Wings of Gold pins in recognition of their naval aviation careers, the Navy announced.

“It is my honor today to present the Wings of Gold to the families of these three American heroes who were among the first to respond to horrific attacks upon our own naval family and tragically were also our sailors who made the ultimate sacrifice in protecting their brothers and sisters in arms,” acting Navy Secretary Thomas Modly said Tuesday in a prepared statement.

Modly awarded Ensign Joshua Watson, 23, his naval aviator wings, and Airman Mohammed Haitham, 19, and Airman Apprentice Cameron Walters, 21, their naval aircrewmen wings. The sailors would have received the wings upon completion of their aviation training.

“Although this authorization pales in comparison to their immense bravery in the line of fire, this winging represents the symbolic achievement of the coveted goal that all three came to Pensacola to accomplish: to join the long line of naval aviators, flight officers, and aircrewmen who have served the cause of freedom so valiantly for over a century,” Modly said.

The sailors were killed by Saudi air force 2nd Lt. Mohammed Alshamrani, 21, who was in the United States for naval aviation training. Alshamrani injured eight others before a Escambia County sheriff’s deputy shot and killed him.

Rear Adm. Daniel Dwyer, the chief of naval air training who oversees all undergraduate naval aviation training, said the “selfless acts of heroism” by the sailors during the shooting “are nothing short of incredible.”

“They each embody the warrior ethos we expect and require of all wingmen,” he said in the Navy statement. “There is no doubt in my mind they each would have led the charge in their respective naval aviation careers. We are deeply saddened by this tragedy and our hearts are truly with the families and friends of our shipmates.”