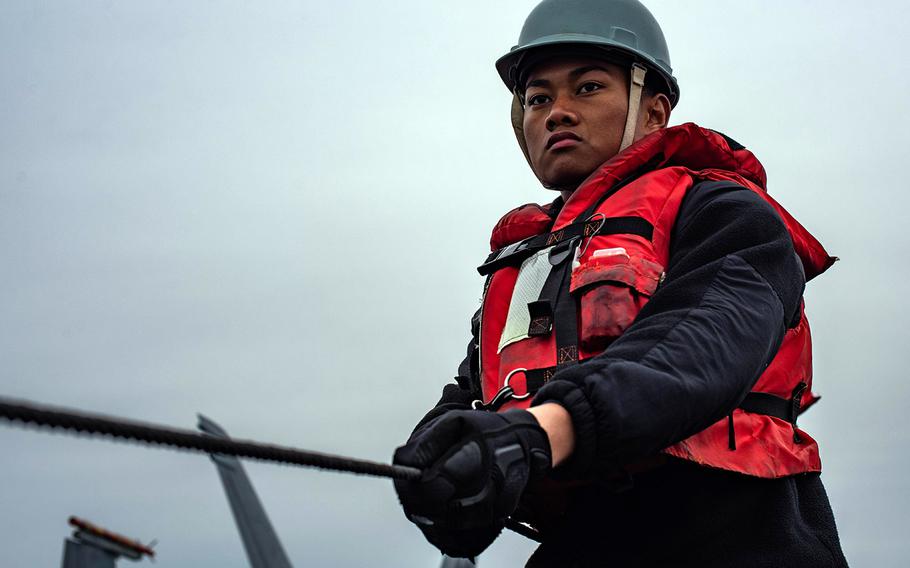 WASHINGTON — The sailor who shot himself Tuesday morning while standing watch at Naval Air Station North Island, San Diego, was a 20-year-old man from California, a Navy spokesman said Friday.

Seaman Isaiah Glenn Silvio Peralta of Pittsburg, Calif., was standing security watch on a pier at the base when he died from a self-inflicted gunshot wound to his head, according to Brian O'Rourke, a spokesman for Navy Region Southwest.

Peralta was assigned to the USS Theodore Roosevelt and the ship has a team of chaplains, psychologists and counselors meeting with sailors to provide support and counseling, according to Cmdr. Zach Harrell, a spokesman for Naval Air Forces. A second psychiatric team is also en route to the ship to assist.

Peralta joined the Navy on Sept. 28, 2018 and was a student at Naval Aviation Schools Command and Naval Air Technical Training Center in Pensacola, Fla., between Nov. 2018 to July 2019, according to the Navy.

He obtained the rank of seaman on July 16, 2019, and then reported to the USS Theodore Roosevelt aircraft carrier Aug. 9, 2019. The Navy does not list any awards or decorations for Peralta.

The Naval Criminal Investigative Service has an ongoing investigation into Peralta’s death and did not release any further information about the incident.

“Out of respect for the investigative process, NCIS does not discuss ongoing investigations,” Jeff Houston, a spokesman for NCIS, said in a statement issued Friday.

The Defense Suicide Prevention Office recently released a report on military suicides between April 1 to June 30 of this year. When the numbers from the report are compared to the same period from 2019, they show an increase in suicides for each service’s active component except for the Navy. This report is the first look at suicides among military personnel since the coronavirus pandemic started in March.

While these numbers are subject to change due to investigations or additional information related to a death, the report shows that between Jan. 1 and the end of June, the active component has had 170 suicide deaths, the Reserve has had 44 suicide deaths, and the National Guard has had 46 suicide deaths.