Ruth Bader Ginsburg, an advocate for military women, to be buried at Arlington 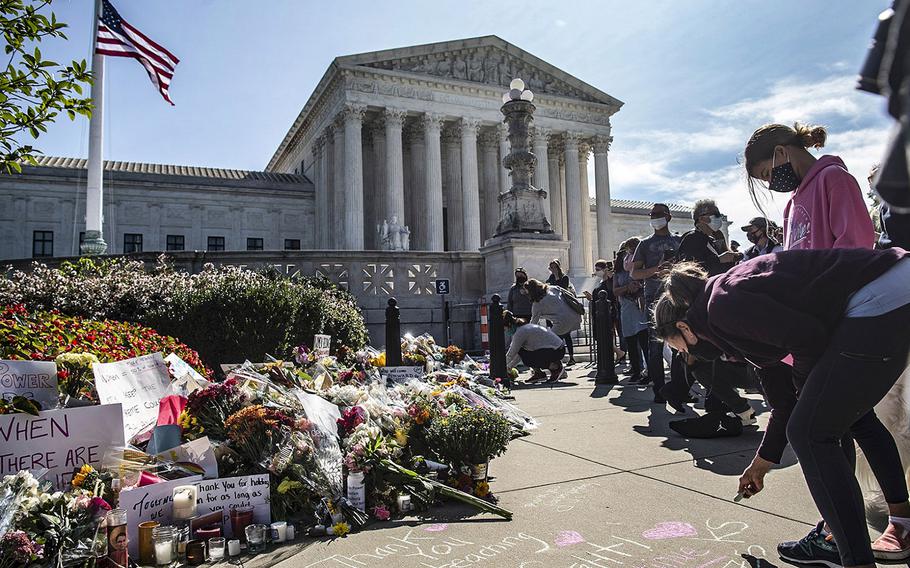 Mourners leave flowers and messages on the sidewalk outside the Supreme Court in Washington, D.C., on Saturday, Sept. 19, 2020, as the American flag is flown at half-staff in honor of the passing of Supreme Court Justice Ruth Bader Ginsburg. (Carlos Bongioanni/Stars and Stripes)

WASHINGTON — Justice Ruth Bader Ginsburg, who had advocated for military women during her career, will be buried at Arlington National Cemetery, according to the Supreme Court.

Ginsburg, the second woman to serve on the court, died Friday night at age 87 after a long battle with pancreatic cancer.

A date for the funeral has not been announced and she is expected to lie in repose this week at the Supreme Court, according to an announcement from the court issued Friday. Within hours of her death, the steps of the courthouse turned into a makeshift memorial that displayed hundreds of flowers and letters of support.

Ginsburg's husband Martin Ginsburg, a lawyer and Army veteran who died of cancer in 2010, is already buried at Arlington.

Ginsburg was not a veteran, but under the cemetery's rules, justices are eligible to be buried there. Thirteen other Supreme Court justices are buried at Arlington, including former Chief Justices Earl Warren, William Rehnquist and William Howard Taft, according to the cemetery.

Ginsburg, who was a feminist icon and fierce advocate for gender equality, argued multiple landmark cases to advance to rights of women in the military.

In the case of United States v. Virginia in 1996, Ginsburg wrote the majority opinion striking down Virginia Military Institute’s traditional male-only admission policy. It was the last male-only public school in the country and it contemplated going private to avoid legal repercussions until the Defense Department threatened to pull ROTC programs from the school.

By a 7-1 ruling the court found VMI male-exclusive admissions in a state-supported military college was unconstitutional under the Fourteenth Amendment's equal protection clause.

“Women seeking and fit for a VMI quality education cannot be offered anything less, under the state’s obligation to afford them genuinely equal protection,” Ginsburg wrote.

Before becoming a judge, Ginsburg, representing the American Civil Liberties Union, argued the case of Frontiero v. Richardson before the Supreme Court in 1973. The landmark case decided service members cannot be given different benefits based on gender.

Sharron Frontiero, an Air Force officer, challenged a rule that gave servicemen automatic housing benefits while women in the ranks could not automatically receive the same allowance. Ginsburg convinced the court that the policy discriminated against women in violation of the Fifth Amendment's due-process clause. Frontiero won her case by an 8 to 1 vote.