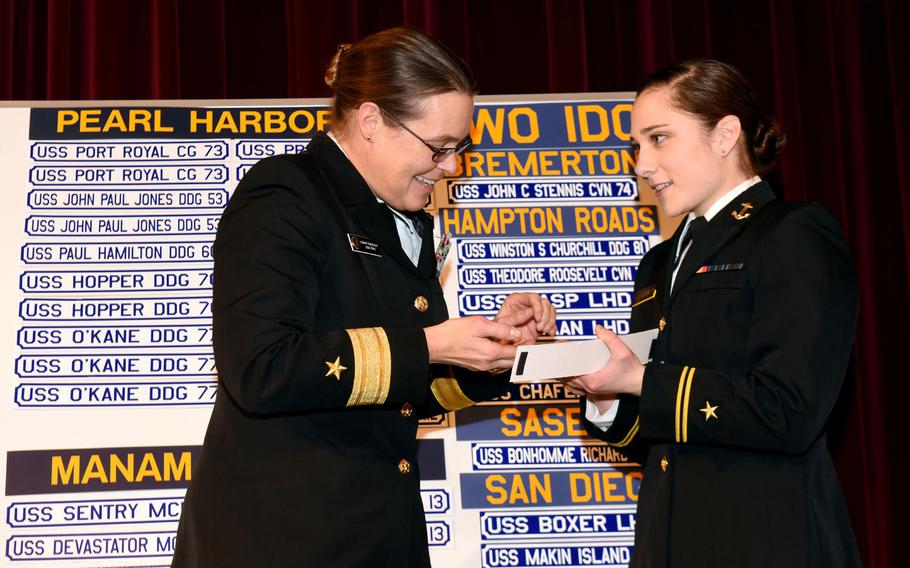 Rear Adm. Cynthia M. Thebaud, commander of Expeditionary Strike Group 2, presents her Surface Warfare Officer pin to U.S. Naval Academy Midshipman 1st Class Lily Van Steenberg during Ship Selection Night in Mahan Hall on Jan. 29, 2015. Ship Selection is the culmination of the service assignment process for Naval Academy midshipmen assigned to serve as Navy Surface Warfare Officers. Upon reporting to their first ship after graduation and commissioning, they will be in charge of any number of shipboard operations and activities while at sea. (Nathan Wilkes/U.S. Navy)

The Defense Department is being sued for failing to comply with open-records statutes and withholding documents on how the country’s military service academies recruit and admit students to their prestigious, yet tuition-free, institutions.

According to SWAN and the ACLU, the percentage of women at West Point has remained between 14 and 17 percent for more than 25 years; women are less than one-fourth of the brigade of Midshipmen at the Naval Academy, and the Air Force Academy has limited its enrollment of women cadets to at or below 23 percent since 1976.

That “underrepresentation,” according to SWAN and the ACLU “contributes to a dearth of women officers” in the military: Women comprise 17 percent of officers, they say. That low percentage undermines attempts to rid the military and its academies of sexism, sexual harassment and sexual assault, the groups say.

The groups’ request for records, filed under the Freedom of Information Act, also asked for information regarding facilities for women and policies and responses to sexual harassment and assault at the military service academies.

“The U.S. Air Force Academy (USAFA), the U.S. Naval Academy (USNA), and the U.S. Military Academy (USMA) at West Point have maintained policies and practices that have resulted in student populations in which women are significantly underrepresented, and campus environments where misogyny and harassment prevail,” the news release says. “The lawsuit aims to capture information about the military academies’ admissions and recruiting policies, with the ultimate goal of ending gender disparities and discrimination that women who aspire to be military officers face due to the policies.”

“As a matter of policy the Defense Department does not comment on pending litigation,” spokesman Lt. Cmdr. Nate Christensen said in an email.

The Naval Academy responded to the FOIA request by disclosing some records, but it withheld others, the groups said. The Army and Air Force academies produced no documents at all.

“Accordingly, the lawsuit contends that DOD failed to release the records and failed to make a reasonable effort to search for the records within the statutory deadlines,” they said.

Those accepted to the academies pay no tuition. They have a five-year commitment to serve after graduating as junior officers.

“The Military Service Academies are premier educational institutions that provide tuition-free paths to leadership and are run by the federal government — there is no excuse for the government to provide this opportunity to women at such dismally low rates,” said Ariela Migdal, ACLU Women’s Rights Project senior staff attorney.

The lawsuit is not the first time the service academies’ admission data have been sought. Naval Academy professor Bruce Fleming several years ago asked for records concerning admission rates; he contended that the academy admitted a far higher percentage of applicants and was far less selective than it said it was. Fleming’s FOIA request was granted. But the academy should have provided him with the records without requiring a FOIA request, he wrote in 2011 in The Washington Post.

Instead, he said in the Post, he was forced to “wrest from this taxpayer-supported institution data that it should be eager to share with its paymasters, the civilians.”

He added, “This, unfortunately, is consistently the way the academies operate.”