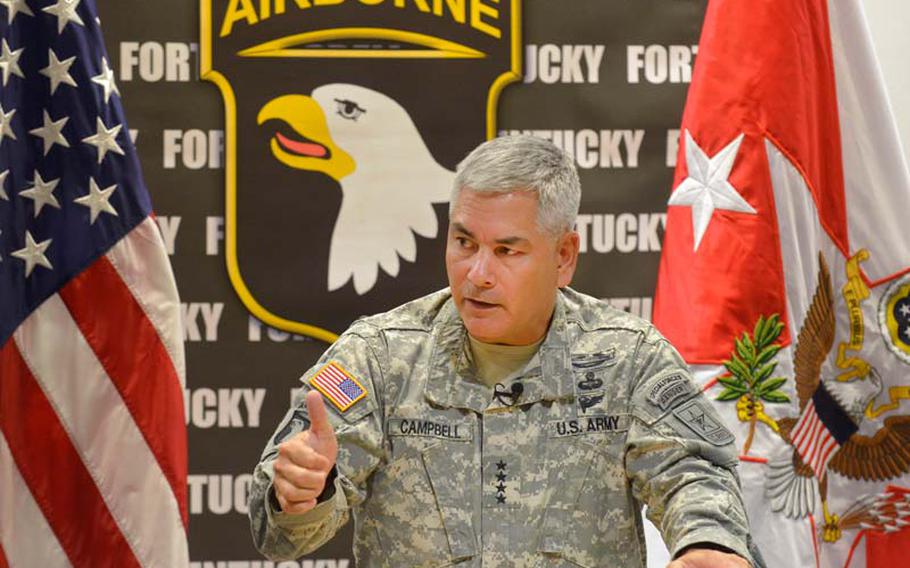 WASHINGTON — Reports of the Taliban gaining ground as U.S. troop levels fall and Afghan soldiers take on more fighting duties are more about PR than battlefield realities, the general set to take over command of the NATO combat mission in Afghanistan suggested.

Gen. John F. Campbell, who spoke to reporters at the Pentagon on Friday, said insurgents are talking a better game than they’re fighting and receiving credit for victories they’re not winning. Campbell is wrapping up a term as Army vice chief of staff and is scheduled to arrive in Afghanistan late next month.

Campbell also spoke about the Army’s previously announced plan to deliver notice of involuntary separation to 550 majors in the coming days. As it was with 48 of 1,100 captains notified recently that their Army careers would end, some of the majors are likely to be deployed in Afghanistan when word comes down.

The separation of deployed officers brought expressions of concern and condemnation from Republicans on Capitol Hill. Campbell said while it’s a painful step to take as falling budget force the Army to shrink, it’s also unavoidable.

The Taliban have reportedly surged out of strongholds in remote areas of the south and taken over strategic territory around Kabul as well as elsewhere in the country. Campbell said many of the claims were based on propaganda by the insurgents trying to intimidate the Afghan public into supporting them.

“A lot of what you’re getting on how bad it may have been down in the south, or this attack there, or some of the things in the east, is we have kind of lost the information war here,” he said. “The Taliban are trying to go do what they couldn’t do for the elections with these spectacular attacks.”

Campbell, who has been tapped as the final commander of the NATO combat mission, which ends this year, acknowledged the Taliban are making Afghanistan pay a heavy price.

“It’s not much ado about nothing,” he said. “There is very much some concern because of the numbers of civilians that have been attacked and killed is much higher.”

But he said there’s a fundamental difference between the war now and when he last commanded troops in Afghanistan in 2011. Then, he said, the Taliban could take and hold positions, while now, the improved Afghan security forces are usually able to retake lost ground quickly.

Campbell will also likely oversee the planned post-2014 advisory mission to support the Afghan military, which would include 9,800 U.S. advisors and an additional 3,000 to 4,000 NATO troops. About 22,000 U.S. troops are currently stationed in Afghanistan, he said.

A bilateral security agreement between the two countries authorizing the mission remains unsigned while the results of the recent presidential election are hashed out. Campbell said the existing status of forces agreement could allow the U.S. contingent to remain, should President Obama approve that course. Allied NATO troops, however, would have to withdraw because the SOFA that covers them expires Dec. 31.

Asked what part of his upcoming assignment makes him lose sleep at night, Campbell said it was balancing the demands of the advisory mission with the imperative of force protection as U.S. troops numbers drop toward zero by the end of 2016, a timeframe specified earlier this year by Obama.