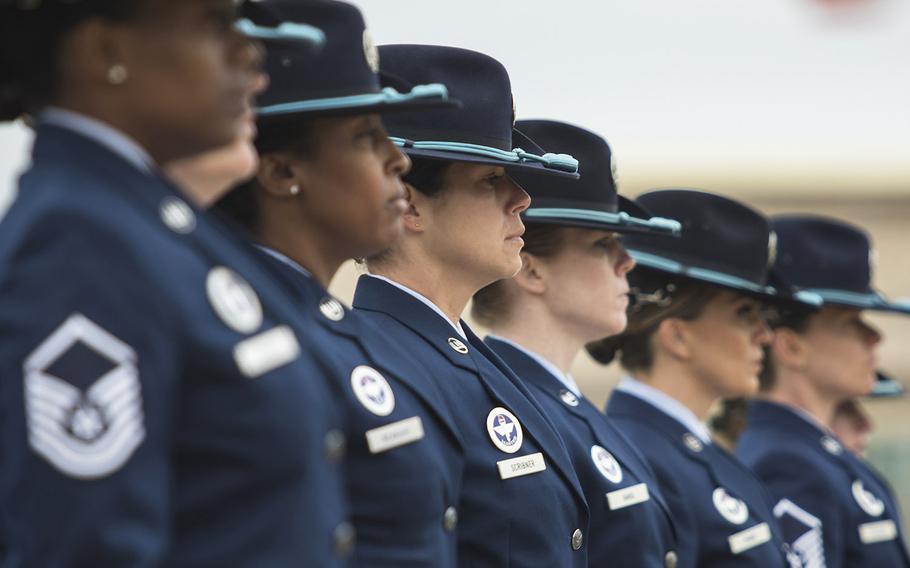 WASHINGTON — Providing female servicemembers with properly fitted protective equipment and encouraging the Department of Veterans Affairs to change its motto are among the recommendations laid out in an annual report to the secretary of defense.

The Defense Advisory Committee on Women in the Services, an advisory panel of civilian women and men, submits recommendations in an annual report on policies and issues affecting women in the military. Its 2018 report, released Monday, had nine recommendations and identified one topic of continuing concern.

This year, the group recommended that the secretary of defense encourage the VA to reconsider its department’s motto to be more gender inclusive.

“The continued use of this motto undermines VA efforts to provide support and resources to servicewomen transitioning out of the military because its gender-specific language sends an unwelcoming message of exclusion,” the report says.

Adopted in 1959, the VA motto is a quote from President Abraham Lincoln’s second inaugural address from 1865: “To care for him who shall have borne the battle and for his widow and his orphan.” Iraq and Afghanistan Veterans of America has pushed the VA since 2017 to change the motto to reflect female veterans, but the department has said that it wouldn’t be changed.

The committee also recommended that the services give female servicemembers personal protective equipment and gear that fits them properly. Currently, units scheduled to deploy are given priority when it comes to receiving newer equipment, including gear that is more fitted for female body types.

“Poorly fitting equipment is a leading cause of injury in servicemembers. Given that most traditional [equipment] was designed to fit men, women are the most likely to suffer from injuries as a result of incorrectly fitting gear,” the report says.

With all military occupations open to women, the need for female servicemembers to have access to properly fitted equipment is growing, the committee explained.

“Properly fitting equipment is essential to the success of individual Service members as well as the military as a whole. Moreover, Service members need to be familiarized with their combat gear to be fully prepared in the field,” they wrote.

Another recommendation was for the secretary of defense to mandate that all services provide 21 days of parental leave to “secondary caregivers,” which used to be called paternity leave. The 2017 National Defense Authorization Act increased the leave from 10 to 21 days, but the Navy and Marine Corps only provide 14 days of leave.

“Authorizing servicemembers the maximum allowable 21 days of nonchargeable secondary caregiver leave will afford equitable opportunities to all military members, enabling them to best care for their families and promote retention,” the committee wrote.

While the group “is encouraged with the progress the Marine Corps is making, the Committee remains dedicated to ensuring that gender integration continues to progress in Marine Corps’ recruit training,” the report says.

“The Committee believes integration across all training units, military positions and occupations will promote a culture of inclusion.”

Other recommendations made by the committee are to require services to focus marketing efforts on realistic portrayals of female servicemembers; to have the Marine Corps eliminate a pregnancy status code used in the weight section of its performance evaluation form; and to expand an Air Force program to all the services to help transitioning female servicemembers learn about VA resources.