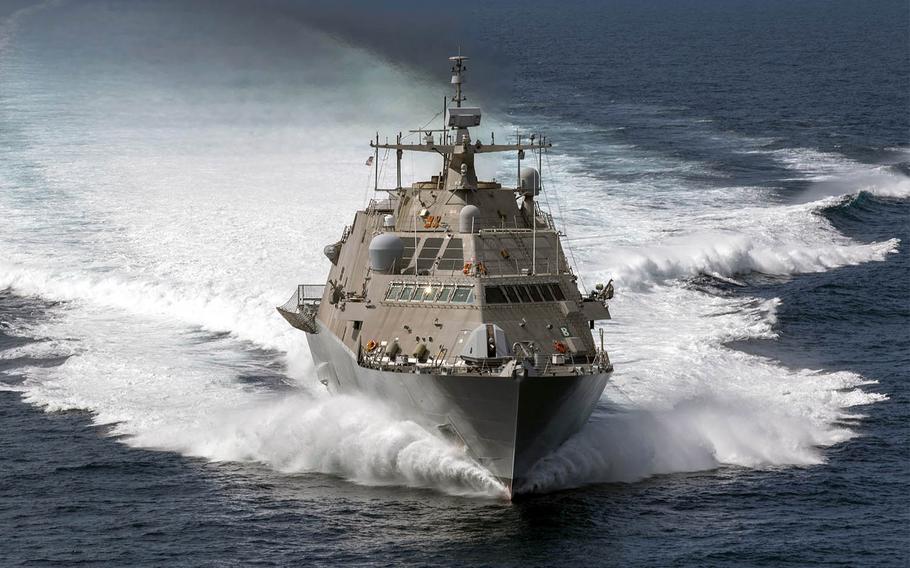 The littoral combat ship USS Detroit is making its way to its Florida homeport after a key piece of its propulsion system malfunctioned, according to a news report Thursday.

The Freedom-class ship experienced a breakdown while working counternarcotic operations with the 4th Fleet in the Caribbean Sea and Eastern Pacific Ocean, according to a report in Defense News.

“USS Detroit (LCS 7) experienced an engineering casualty during routine operations, and a technical evaluation determined that in-port repairs would be required,” the news site reported, citing a Navy statement.

An email message from Stars and Stripes seeking further information from the U.S. Southern Command after business hours Thursday was not returned.

The ship’s combining gear, a transmission connecting the Detroit’s diesel and gas turbine engines to the propulsion shafts, is reportedly the cause of the engineering failure, Defense News reported, citing three anonymous sources.

The Detroit is homeported at Mayport, Fla. It was on its third anti-drug-smuggling operation with the 4th Fleet, according to a Navy news release Sept. 8.

Littoral combat ships, borne a decade ago of new technology for a close-to-shore mission, were criticized as overpriced, with light armament and low survivability. The ships come in two classes, Freedom and Independence.

Two Independence-class ships, the USS Gabrielle Giffords and the USS Montgomery, operated in the Western Pacific this year out of Singapore, conducting freedom-of-navigation patrols in the South China Sea and taking part in a faceoff with Chinese vessels near a Malaysian-contracted drillship in disputed waters near Borneo.

The two ships also participated in naval exercises with U.S. warships and those of other nations, all without any publicized mechanical problems.

The Detroit was delivered in August 2016 to the Navy by Wisconsin shipbuilder Fincantieri Marinette Marine, a Lockheed Martin subsidiary. It was commissioned in October 2016.