Report: Marine Corps has most hazing complaints among military services for fifth year in a row 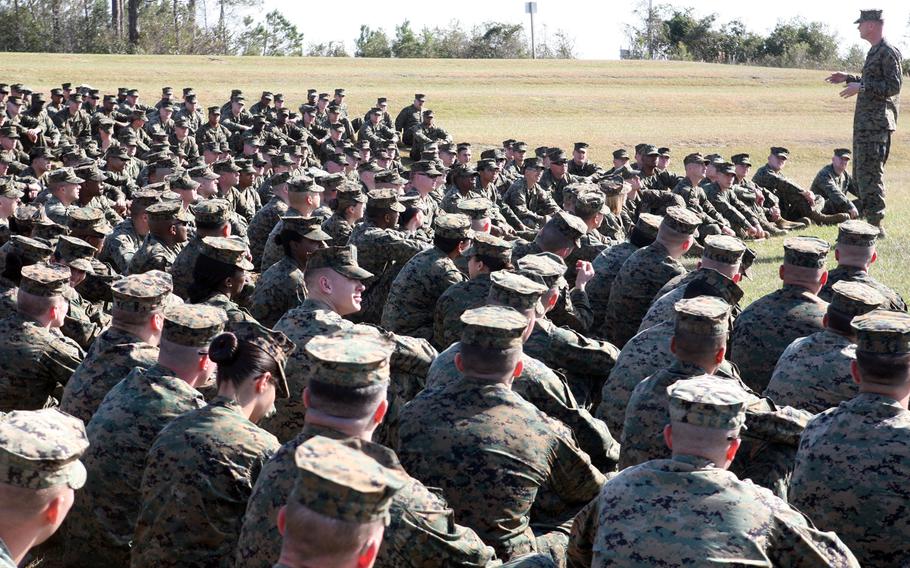 WASHINGTON — For the fifth year, the Marine Corps has had the most hazing complaints among the military services, according to a new Defense Department report.

During fiscal year 2020, the military received 183 hazing complaints, with 152 from the Marine Corps — 83% of the total — according to the Annual Report for Hazing Prevention and Response in the Armed Forces, obtained this week by Stars and Stripes through the Pentagon. The report has not been publicly released.

The report is submitted every January to Congress as required by the 2017 National Defense Authorization Act. The military services submit data to the Pentagon and cite improvements that have been made or policies they are undertaking to prevent hazing among their ranks. The reporting period for the FY2020 report was between Oct. 1, 2019, and Sept. 30, 2020.

The 183 military-wide complaints were a 15% decrease from FY2019, which had 216 complaints. The DOD is hesitant to say how much the pandemic factored into the decrease, according to the report.

Physical contact was the most frequently reported allegation, and there were also reports of verbal, nonverbal and psychological hazing. In the 52 substantiated complaints military-wide, 106 offenders were associated with the hazings, according to the report.

The Marine Corps, which is the smallest of the services and has a younger population, had 152 hazing complaints in FY2020. Of those, 40 were substantiated, 31 were unsubstantiated, eight were dismissed and 73 remained open, pending a resolution at the end of the fiscal year, according to the report.

The hazing complaints reflect a 19% decrease from FY2019, when the Marines had 188 reports. It was also the lowest number of complaints for the service since 2016, according to previous reporting. The other military services consistently have single- or double-digit numbers of complaints.

In the report, the Marine Corps said its high number of complaints was due to its case management system, “the commandant’s increased emphasis on culture change, and the importance of reporting problematic behaviors.” A similar reason was given in the FY2017 report, when the service had 314 complaints, of which 146 were substantiated.

Brig. Gen. Jason Woodworth, the director of the Marine Corps’ Manpower Plans and Policy Division, was unable to comment on FY2020 numbers since the report has not been released publicly. However, he sent a statement to Stars and Stripes on Friday addressing larger issues.

Woodworth emphasized each commander’s responsibility for ensuring that Marines work in a place with “dignity, respect and trust.”

“By reporting, recording, and investigating hazing we intend to demonstrate our focus on confronting the challenge and our commitment to eradicating it from our Corps,” he said. “Bottom line: We learned from past mistakes, we find cases because we are actively looking for them as a service, and [we] have a well-developed system for reporting/investigating.”

Their case tracking system is called the Discrimination and Sexual Harassment system, or DASH, and it is a secure database that provides oversight of “prohibited activities and conduct” across the service such as hazing and sexual harassment, according to the report.

Each military service has its own way of reporting, tracking and analyzing complaints, with some providing more details than others. The Navy, for instance, has been using a spreadsheet to document incidents and prepare data for the annual report, but is looking to upgrade to a new system. The Air Force has its own software to process and track complaints. The Army uses three case management systems and is looking for a more standardized method, according to the report.

The Air Force had 12 complaints in FY2020, of which four were substantiated, seven were unsubstantiated, and one was withdrawn. Its complaints stand out, because most of the offenders were more senior enlisted, in the ranks of E5 and E6, or staff sergeant to technical sergeant. They also doubled the number of substantiated incidents from two in FY2019 to four in FY2020.

The Navy had 12 complaints in FY2020, the same number it had in FY2019. Eight complaints were substantiated, an increase from five the previous year; two were unsubstantiated; and two are pending.

In 2020, the DOD started to use its new management system, Advana, to help track and analyze data about hazing. The Pentagon also updated its policy document regarding harassment prevention and response to reinforce “a zero-tolerance climate for misconduct related to hazing, bullying, sexual harassment, and other problematic behaviors,” according to the report.

More than half of the 106 substantiated offenders military-wide received more than one corrective of disciplinary action, according to the report. The most common actions taken by commands were nonjudicial publishments, such as reduction in pay grade or extra duty. Other administrative actions such as letters of reprimand were also filed against offenders. None of the services reported repeat offenders from the previous year.