Report: Black members of Air Force, Space Force not treated the same as white troops, services need to figure out why 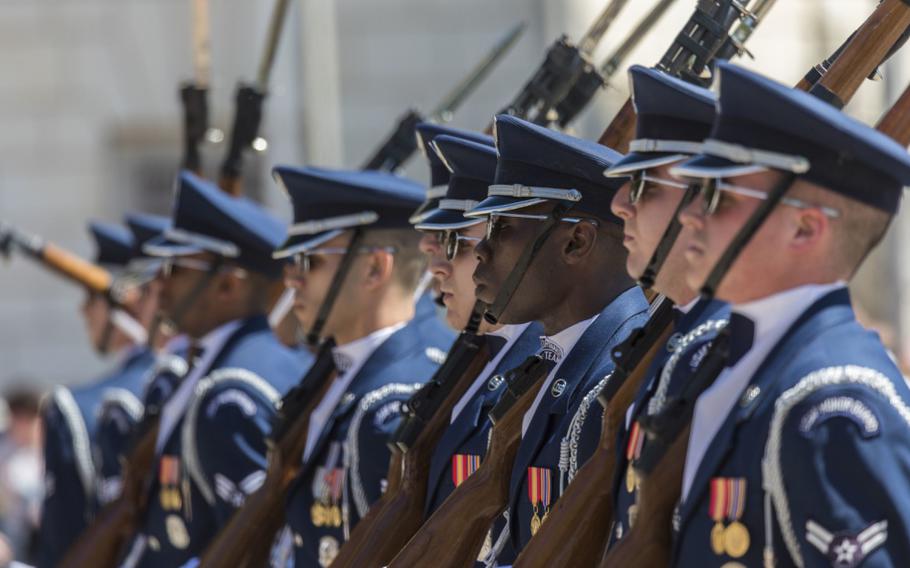 WASHINGTON — Black troops in the Air Force and Space Force are investigated and punished far more often than their white counterparts and they receive fewer career advancement opportunities, according to a review by the Air Force inspector general published Monday.

The four-month data analysis by the inspector general found disparities exist in the treatment of Black and white troops within the Air Force Department, Lt. Gen. Sami Said, the service IG chief, said Monday. However, the investigation did not attempt to determine the actual causes of those discrepancies, meaning Said could not definitively say they were the result of racism or other biases within the force.

“That requires more detailed assessment and analysis,” Said told reporters in a phone call before the report’s release Monday. “If you don’t know where there’s potential smoke, and if you don’t know if it’s smoke or dust, you’ll wander all over the place. So, this review tells us where to focus … and where additional analysis is absolutely required.”

The Air Force has already begun probes aimed at identifying and addressing the root causes of the disparities, which will be largely driven by institutions within the Air Force with the inspector general’s help, the general said. He committed to making public further Air Force findings on discrepancies in the way that Black and white troops are treated.

The initial inspector general review was launched at the request of the Air Force Department’s top civilian and military leaders during the summer amid a racial reckoning nationwide following the killing of George Floyd by Minneapolis police. Said was charged with determining in about 120 days whether the military had disparities that could be documented about how it treated its Black personnel. IG investigators looked at more than five years of data and surveyed some 123,000 troops in an effort to quickly make a determination.

The data is clear that disparities exist, Said said.

Among the statistics noted in the IG report:

• Enlisted Black airmen and guardians were 72% more likely than whites to be punished through the Uniform Code of Military Justice or through nonjudicial punishment measures.

• Enlisted Black airmen and guardians were 57% more likely than whites to face a court-martial.

• Black junior enlisted Air Force and Space Force troops are twice as likely to be involuntarily discharged for misconduct than white troops.

• Black Air Force and Space Force members are less likely to be promoted to the ranks of E-5 through E-7 and O-4 through O-6.

Many of the results were unsurprising, Said said, but he had not anticipated the “unprecedented” number of responses from service members who wanted to share their own experiences in the surveys, follow-up reports, and 138 small-group interviews with IG staff at bases across the country.

“The pent-up angst on the topic [and] the volume was surprising,” Said said. “When we asked for feedback, I expected to get feedback, but we were just drowned with feedback. The airmen were very eager to tell the story. They wanted their voices heard.”

In many of those cases, Said said, racism was probably a factor. About 50% of Black service members polled during the review reported they had experienced racism firsthand by another member of the Air Force Department. Less than 14% of white respondents to the survey reported experiencing racism.

But the IG had no way during its short review to determine the veracity of specific accusations of bias levied by troops participating in the surveys and listening sessions.

“We have enough feedback … that it is likely that some of these elements [of racism and bias] are contributing factors based on what we’re hearing from the voice of the airmen,” Said said. “I can't validate what Airman X, Y or Z said, but if 1,000 airmen are saying the same thing, then I have got something that is almost validating itself. So, we have indications that there is a there, there.”

The review revealed 40% of Black service members did not trust their commanders to address racism or biases, while only 10% of white service members reported such distrust in their chains of command.

Black service members also reported they felt they were less likely to receive opportunities to advance in their careers than their white counterparts, and they were more likely to be punished. Those survey findings largely matched the data that the IG found.

The survey found another troubling aspect in that several service members in supervisory positions believed they were under pressure from leaders to punish Black service members for minor infractions for which white troops would likely not be disciplined.

While those issues are likely rooted in racism, Said said, other problems cannot so easily be traced to biases.

For example, the general said, Blacks are severely underrepresented within the pilot force. Only about 2% of the Air Force’s entire pilot population is Black, a figure that includes Gen. Charles “CQ” Brown, who in August became the first-ever Black military service chief.

Said, who is a fighter pilot, said there is evidence that Black service members end up more often in support specialties with jobs similar to civilian roles than operational specialties — such as flying, combat control, or search and rescue — because they are less likely to be exposed to veterans of the operational Air Force in majority-Black communities.

He said he knew Air Force pilots growing up, which attracted him to the service and flying.

“But if you just know about the Air Force generally, and you've not ever been exposed to what it's about to be a pilot in the Air Force before you join the Air Force, you’re likely to go to do something else,” Said said. “That's not bad at all, right? All specialties are equally important, but the exposure early on to the pilot career field is lacking [and] could be further enhanced and their specific initiatives … on how to address that.”

The Air Force IG chief said it would take years to fully investigate and reverse issues that have led to the obvious racial disparities in the Air Force. He said the IG was committed to revisiting the issue every year until it was satisfied that Air Force and Space Force had adopted solutions to the problems.

He committed the IG will continue investigating until the institutions have determined the causes of racial disparities and instituted changes that have begun producing results.

“And, these actions, by the way, it's not just putting it on paper, we're not going to drop the mic until the actions are actually executed and we've assessed their effectiveness,” Said said. “Because that's where we've missed the mark greatly in the past — lack of follow through. So we're going to take it all the way.”