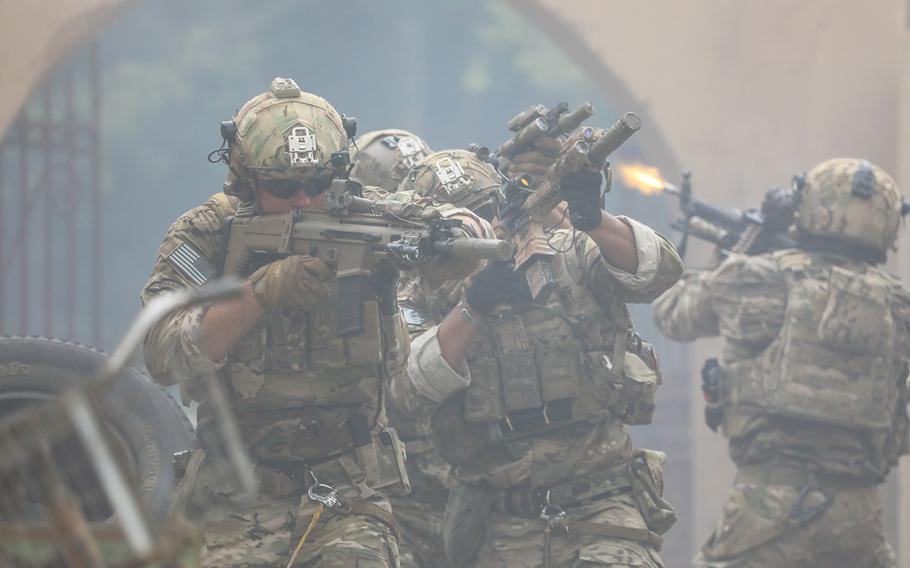 The officials declined to identify where in the Middle East the task force will deploy, but they said the unit, like thousands of other troops tapped to deploy last week, would be in position to rapidly respond if Iran retaliated against American military positions in the region. The officials, who were not authorized to discuss the special operations deployment and talked on the condition of anonymity, also declined to say how large the deploying task force would be.

Politico reported Sunday that the task force would be built on a Ranger company, which typically includes about 150 to 200 troops. The defense officials on Monday would only confirm that the force would include several dozen troops, and it would primarily be built of Rangers.

Those special operators will join thousands of conventional troops called to deploy rapidly to the Middle East amid heightened tensions between the United States and Iran, especially after the killing of Gen. Qassem Soleimani on Thursday in a strike at the Baghdad airport. More than 3,000 paratroopers from the Army’s 1st Brigade Combat Team of the 82nd Airborne Division are also deploying, the Pentagon announced last week. Some 4,500 sailors and Marines aboard the USS Bataan, an amphibious assault ship, were also ordered to steam toward the Middle East, bypassing a planned training exercise with U.S. Africa Command, according to USNI News.

Iran has threatened violent retaliation for Soleimani’s killing. President Donald Trump warned Iran against such actions in a Saturday tweet, claiming the Pentagon had identified 52 Iranian sites that would be “HIT VERY FAST AND VERY HARD” if they retaliated.

“They attacked us, & we hit back,” Trump added in a Monday tweet. “If they attack again, which I would strongly advise them not to do, we will hit them harder than they have ever been hit before!”

The strike on Soleimani, who as Iran’s Quds Force commander was responsible for Tehran’s activities outside its country’s borders – including training and controlling proxy forces in Iraq, Syria, Lebanon and Yemen. His death came after Iraqi Shia militiamen attempted to storm the U.S. Embassy in Baghdad on Dec. 31 as retaliation for U.S. airstrikes that killed some 25 militiamen. Those initial American strikes were ordered by Trump after a rocket attack on a U.S-Iraqi base killed an American civilian contractor and wounded U.S. and Iraqi troops. The United States has blamed Iran and its proxies for that and other attacks in recent months.

The Army’s elite Rangers were among the first U.S. troops sent into Afghanistan in 2001 following the 9/11 terrorist attacks on New York City and Washington. They have faced near-constant deployments to the Middle East – including Iraq and Syria – and to Afghanistan since that initial deployment.

The 75th Ranger Regiment is the Army’s premier light infantry force, which specializes in airfield seizure and raids on high-value targets. The regiment includes three operational battalions – the 1st Battalion at Hunter Army Airfield in Savannah, Ga., the 2nd Battalion at Joint Base Lewis-McChord in Washington, and the 3rd Battalion at Fort Benning in Georgia.

Citing security concerns, the defense officials declined to confirm Monday from which battalion the Rangers would deploy.

Their deployment comes as Iraq’s parliament approved a nonbinding measure calling for the expulsion of American and other foreign troops from its country because of the Soleimani strike. The United States has about 5,200 troops stationed in Iraq, who had been primarily training Iraqi forces to fight the remnants of the Islamic State terrorist group. Those operations have been put on hold amid the tensions with Iran to ensure U.S. troops are adequately protected, according to the Pentagon.

Secretary of State Mike Pompeo said Sunday during a series of television appearances that he was confident American troops would not be expelled from Iraq.