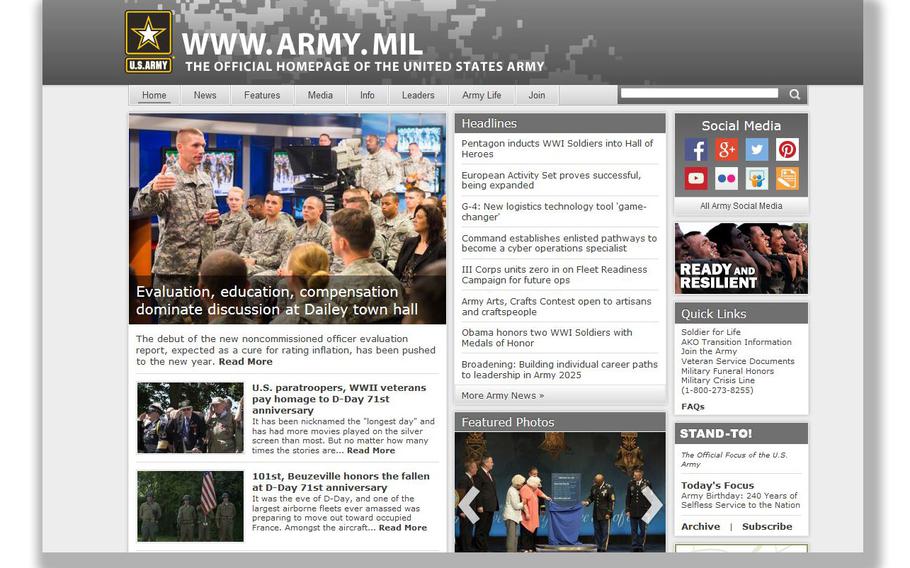 A screengrab of a cached version of the U.S. Army website. A group aligned with the regime of Syrian President Bashar Assad claimed responsibility for hacking the Army’s public website and forcing it offline on June 8, 2015. (Army.mil)

WASHINGTON — A group aligned with the regime of Syrian President Bashar Assad claimed responsibility Monday for hacking the U.S. Army’s public website and forcing it offline.

The Syrian Electronic Army boasted of the hack on Twitter and shared an image of an anti-U.S. message posted before the website went completely dark.

The group, which first surfaced online in 2011, has claimed responsibility for hacks on a string of other targets including U.S. Central Command, government contractors and media outlets.

The Army hack Monday appeared to reference the United States war against the Islamic State in Syria and its plans to train the country’s moderate rebels — who oppose Assad — as a proxy force.

“Your commanders admit they are training the people they have sent you to die fighting,” the group wrote in a cryptic error message that popped up on the Army site before it went offline.

The site remained offline late afternoon Monday, though the Army said it would only be temporary.

“Today, an element of the Army.mil service provider's content was compromised. After this came to our attention, the Army took appropriate preventive measures to ensure there was no breach of Army data by taking down the website temporarily,” Army spokesman Brig. Gen. Malcolm Frost said in a released statement.

The U.S. has avoided any direct military confrontation with Assad but has been bombing inside Syria for 10 months amid the country’s bloody civil war.

Cyber security has emerged as a key battlefield in recent months as U.S. enemies have staged a series of minor yet high-profile attacks of online military targets.

A separate group aligned with the Islamic State claimed a hack of CENTCOM’s Twitter feed in January. Many suspected North Korea was behind an attack on Sony last year, which blocked the release of a movie that was disparaging to President Kim Jong Un.

Last week the U.S. reported a massive breach of federal employees’ digital personnel records. President Barack Obama has refused to point the blame at China, despite widespread speculation that Beijing was behind the attack. China has denied any role in the breach.