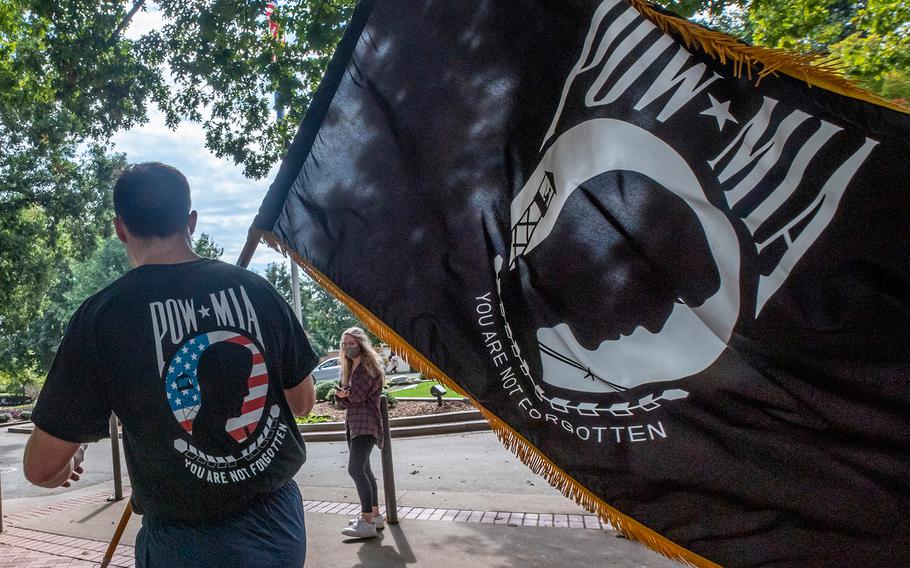 A flag honoring American service members missing or held captive during war is flying atop the White House again after being removed last year by the Trump administration.

The National League of Families POW/MIA Flag, commonly known as the POW/MIA Flag, was hoisted with the American flag Friday in to mark National Former Prisoners of War Recognition Day.

The black-and-white flag, which was adopted by The National League of Families in 1972, carries the image of a silhouetted man beside a guard tower and barbed wire fence, along with the phrase “You Are Not Forgotten.”

The POW/MIA flag honors the roughly 82,000 service members listed as prisoners of war, missing in action or unaccounted for in America’s past wars. It was first flown above the White House in 1982, according to the Department of Veterans Affairs.

The relocation of the flag last summer from over the White House to a less visible spot on the South Lawn had infuriated some veterans groups and lawmakers.

Some critics speculated that Trump’s antipathy toward the late Sen. John McCain, who was held prisoner for almost six years in North Vietnam, played a part in the flag’s move to a less prominent place.

“He’s not a war hero. He was a war hero because he was captured,” Trump said of McCain while on the campaign trail in 2015. “I like people who weren’t captured.”

Democratic Sen. Jack Reed told Reuters in September that the flag’s removal was “a pattern of disrespect” by Trump.

“It’s bad enough that President Trump publicly ridicules American heroes like Senator McCain and others who were captured on the battlefield,” Reed said. “He inexplicably promotes the Confederate flag but fails to fly the POW/MIA flag.”

Reed was among a bipartisan group of lawmakers who passed legislation in 2019 requiring the POW/MIA flag be flown wherever the American flag is displayed on prominent federal properties.

Just days after his inauguration on Jan. 20, Sens. Margaret Hassan, Tom Cotton and Elizabeth Warren sent a letter to President Joe Biden asking him to “take swift action to restore the flag to its place of honor.”

“I am thankful that the POW/MIA flag now once again flies high in its rightful place above the White House,” Hassan said in a news release Friday. “It is a powerful way to continually remember and pay tribute to the tremendous sacrifice of prisoners of war and missing service members.”